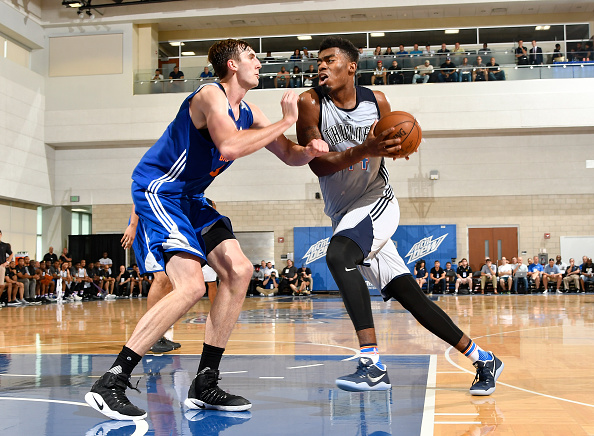 The 2017 NBA Summer League just wrapped up, and that conclusion brings some key takeaways for the players that really needed to impress during the showcase.

These aren’t your recent first-round picks who are sitting on guaranteed contracts for at least another year, if not two. They’re players hoping to secure NBA (or other) contracts this summer almost entirely based on what they’ve displayed for a few games during Summer League. So who did the most to help themselves out?

Johnson was a second-round pick back in 2015, but since then he’s spent all of his playing days with the OKC Blue of the D-League (now G-League). He’s been an all-star down there, and followed that up with a standout performance in this year’s Orlando Summer League to the tune of 18 points per game (second-most in the entire Summer League) and 5.5 rebounds. Those numbers on the boards will have to improve, but he’s very much in the mix for the Thunder’s final roster spot right now.

Cook has a team option on the table for 2017-18, and may have just gotten it picked up after scoring 20.6 points per game for the Pels in Las Vegas. He added some balance to the scoring as well, chipping in 3.6 rebounds and 4.8 assists per night. Though he only played five games for the Mavericks last season, Cook did average over five points in just 15 minutes per game.

Costello was one of just three players to average a double-double in Summer League this year, putting up 11.3 points per game, plus 12 boards each night. That sort of production won’t necessarily translate to the night-to-night NBA grind. But it makes him a more marketable big man who’s only been out of school for a year.

The Mavs didn’t hold onto him, but Paul still found a way to sign with a team in Texas. He’ll be a member of the San Antonio Spurs next season following a strong Summer League showing. He’s been in Europe these past few seasons, showing off an impressive shooting stroke. So 16.5 points per game in Orlando was just icing on the cake for a Spurs franchise that likes a bit of European influence here and there.

Despite a crowded frontcourt for OKC in Summer League, Hunter was still able to differentiate himself from Johnson (above). His 16.3 points and seven rebounds per game were both among the highs down for the Orlando session.  SB Nation’s Ridiculous Upside believes that the effort could propel the big man to a two-way contract this year (though it likely won’t be with the Thunder).

Williams was one of Vegas’s top scorers all summer, putting up 22 points per game for the Rockets. It’s unlikely Houston does much with its roster until the potential Carmelo Anthony trade business gets sorted out. But a strong scoring performance here helped show what he could do with extended minutes. He averaged nearly 10 points per game with the Rockets last year too, which should help him catch on somewhere.

Moreland out-rebounded everyone in Orlando, earning a multi-year deal with Detroit in the process. His 7.6 points per game and 8.4 rebounds were a quality effort and coinciding with a contract that’s now in effect, he’s clearly a big winner of the event. Despite his inability to stick around the Sacramento Kings from 2014 through 2016, this performance and his G-League all-star status shows he may have turned a corner.

Like fellow Piston Eric Moreland, Jackson also played his way into a contract this summer — however, Jackson’s is in Israel. He’ll join Maccabi Tel Aviv following a Summer League stint where he averaged 15.8 points per game and 5.8 assists per while down in Orlando. Should he return, there may be an NBA market for him now, however.

The Marquette product’s been around awhile (since 2011), so a strong performance this summer was really his best bet to return to the NBA (he played five games for the Lakers in 2014-15). He delivered with 17.8 points, 4.4 rebounds and 4.2 assists per game, while also keeping himself busy during The Basketball Tournament, too. The Knicks need a guard and have shown interest, so we’ll see if he can take the long road to a roster spot.

Chicago’s all in on a rebuild, which opens opportunities for younger players who may not get them otherwise. That could be the case for Blakeney, who signed a two-way deal with the Bulls after posting 16.8 points per game and five rebounds per game in Vegas. Under the two-way rule, he can spend as many as 45 days in the NBA before heading back down (to the Windy City Bulls).