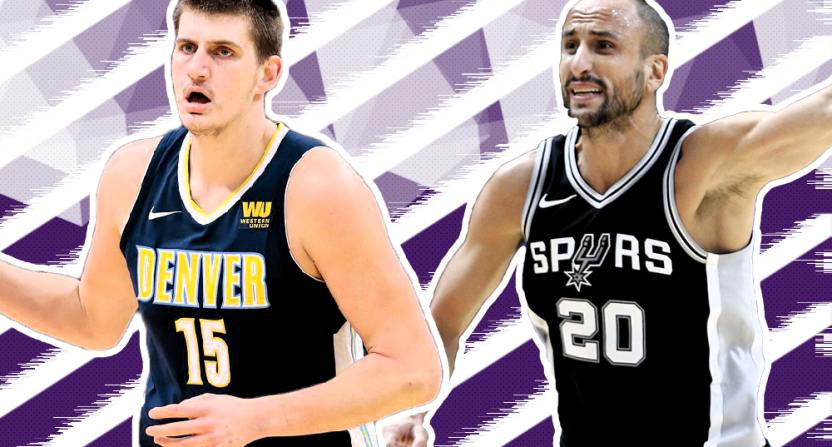 Second-round draft choices don’t have the easiest road to the NBA. Unlike most first-round draft picks, there’s no guaranteed money or contract length for players selected in the later round. Falling in the draft can cost players millions. Most second-rounders have to prove they belong from the get-go and often don’t have a long-lasting, impactful NBA career. It’s why it’s so exciting to see a second-rounder become a good player, or in more rare cases, an all-star.

The NBA draft was wildly different 40 years ago from what it is now. It featured fewer picks and more rounds. In the late 80s, the draft moved from a seven-round format to a three-round format to the familiar two-round format we know today. While former all-stars like Denver Nuggets forward Alex English (23rd overall, 1976), Chicago Bulls forward Dennis Rodman (27th, 1986) and Cleveland Cavaliers point guard Mark Price (25th overall, 1986) were technically drafted in the second round, the draft was a completely different beast back then. Since that point, the second round hasn’t turned out many great players, but there have been plenty of diamonds in the rough.

Ginobili showed how the Spurs were ahead of the rest of the league when it came to using the second round to their advantage. San Antonio nabbed Ginobili and let him percolate overseas before he came stateside in 2002. Ginobili turned in a dynamite NBA career with the Spurs as a fixture on great teams with center Tim Duncan and point guard Tony Parker. He went on to earn a plethora of accolades, including making multiple all-star teams, winning a Sixth Man honor and most importantly, claiming four NBA titles. Ginobili’s success showed other NBA GM’s that second-round picks don’t need immediate returns, and that they make for worthwhile gambles; especially internationally.

Jokic is only 24 years old, but when his career is all said and done, the Serbian center has a good chance to be the best second-round pick ever. Jokic has such a unique skill set as a point forward. Checking in at 7’0″, his combination of passing, scoring, and rebounding for a center is unparalleled in the league. Jokic has gifted court vision for a big. In his fourth season, he’s averaging 20.6 points, 10.7 rebounds, 7.6 assists per game. He’s got a small chance at being the first second-rounder to ever win MVP.

Like many players chosen in the second round, Golden State Warriors forward Draymond Green (35th, 2012) entered the NBA with a massive chip on his shoulder out of Michigan State. While Green didn’t experience immediate success, his true all-star potential was unlocked under coach Steve Kerr in 2015. The 29-year-old is a key player as the Warriors’ versatile Swiss Army knife. He’s an elite defender and a plus passer, and he can provide offense when needed. Even as the fifth or sixth scoring option for Golden State, Green is a huge reason why the Warriors have won three titles in the last four years.

Gasol is definitely a challenger thanks to his immediate NBA impact and incredible two-way ability. When the now-Raptors center was traded from the Lakers to Memphis in 2008 as part of a package to land for his brother Pau, it was considered one of the worst deals in NBA history. Giving up an All-Star center for the rights to his pudgier, younger brother, a couple of draft picks and Kwame Brown appeared to be a light return. But in the long term, that worked out very well for Memphis, with the younger Gasol rising from his second-round status to become a stellar big man and an NBA-best defender at his position. He’s an excellent post defender and an above-average passer, and he can also stretch the floor with his shooting. In his 11th season, Gasol remains a productive starter.

One of the most notable second-round picks ever is former Washington Wizards point guard Gilbert Arenas (31st, 2001). Arenas filled up the net with buckets from the start of his career, averaging a career-best 29.3 points per game in 2005-06. While his later NBA-career will be remembered for the controversial gun incident involving teammate Javaris Crittenton, Arenas had a successful NBA run, earning an estimated $136.4 million during his 13-year career. Not bad for a guy who earned just $332,000 for his first pro season.

The late-90s and early 2000s also produced some of the best (and eventually most expensive) second-round picks ever. Former Seattle Supersonics forward Rashard Lewis (32, 1998) was a two-time All-Star who averaged 15-career points during his career. Like Arenas, Lewis earned an $100-plus million contract, with the Orlando Magic in 2007. Fellow power forward Carlos Boozer (35th overall, 2002) earned more than $140 million in his career. Former Milwaukee Bucks guard Michael Redd (43rd, 2000), meanwhile, became one of the league’s more underrated players, averaging 22+ points for four straight seasons between 2004-2008. He earned more than $90 million in his career.

Being a second-round pick shouldn’t deter players from becoming all-star picks, even if they’re at a disadvantage. Denver Nuggets forward Paul Millsap (47th overall, 2006) became one of the NBA’s top defenders and the best player on a 60-win Hawks team. New York Knicks center DeAndre Jordan (35th overall, 2008) is a double-double machine and an efficient scorer in the post. Nuggets point guard Isaiah Thomas (60th overall, 2011) was an MVP candidate in Boston before injuries slowed him down. Dragic became a mini Steve Nash and a first-time All-Star with Miami last year. All of those players have carved out meaningful NBA careers despite no guarantees of success in the NBA.

Ultimately, Ginobili looks like the greatest second-round pick in the modern era. Here are our rankings.

All of them had different paths to the NBA and succeeded despite where they landed in the draft. Future second-round picks should use the career success of players like Ginobili, Jokic and Green as an inspiration.