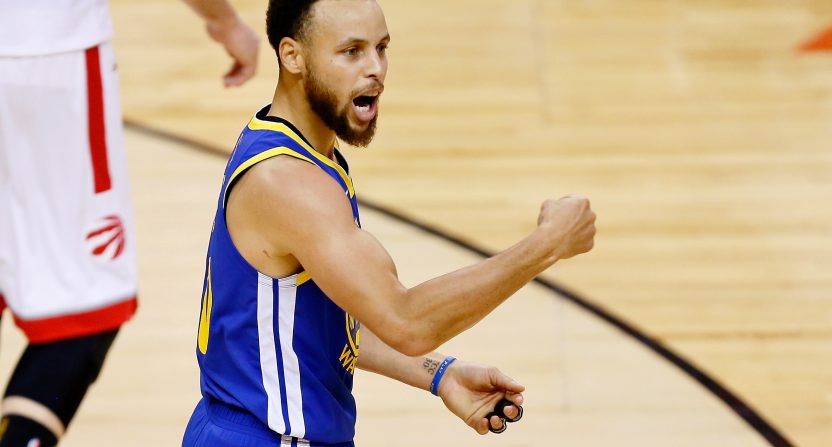 The 2019-2020 NBA regular season is less than two weeks away. Here’s a prediction on the individual major player awards:

Curry doesn’t have to share shots with Durant so his usage rate should go up. It was a career-high (32.6) when the Warriors set the NBA record for wins, going 73-9. That same season, he also set personal bests in shots (1598) and three-point tries (886). Curry is a good bet to win the scoring title because he’s going to have to carry the offense. Golden State doesn’t have the depth, nor talent anymore. With the Warriors’ margin of error so small, look for Curry to dominate the ball and minutes. Nobody will be more important to their team than Curry.

Joel Embiid, Philadelphia 76ers: Joel Embiid has some lofty goals. He wants to win the MVP, Defensive Player of the Year, AND an NBA championship. That ambitious triple crown has been accomplished by only Hakeem Olajuwon in 1993-94. Heck only four players have won both MVP and DPOY: Jordan, Olajuwon, David Robinson, and Kevin Garnett.

According to Five Thirty Eight, since 2013-14, Embiid is the second-best defensive player in the league. (he trails only Draymond Green). However, last season, Rudy Gobert won DPOY, finishing first in defensive box plus/minus (5.1) and second in defensive win shares (5.7). What could help Embiid is that he’ll anchor possibly the best defensive team Philadelphia’s ever had. The 76ers were only 15th in defensive rating (110.97), but with the additions of Al Horford and Josh Richardson that should improve. They also will have one of the tallest teams in the league with length that figures to cause severe matchup problems.

Jayson Tatum, Boston Celtics: Jayson Tatum looked like a future star in 2017-18, finishing third in Rookie of the Year voting behind Ben Simmons and Donovan Mitchell. Last year, Tatum’s scoring improved (13.9 to 15.7), but he wasn’t a better player. His shooting dropped (47.5% to 45%), he got to the free throw line less (3.2 to 2.9), and his turnovers increased (1.4 to 1.5). The advanced metrics on Tatum were also worse- lower Player Efficiency Rating (15.3 to 15.1) and lower Win Shares (7.1 to 5.0). Overall, the Boston Celtics were a huge disappointment for a team that was supposed to be a title contender.

Kyrie Irving is gone and Kemba Walker is the point guard. That could help Tatum. Statistically at times the Celtics were a better team without Irving. Tatum is Boston’s leading returning scorer and is focused on improving his shot selection. He was particularly bad at mid-range jumpers from the right side, shooting a league-worst 22%.

Tatum said he wants to shoot more three-pointers and layups, and get to the line. If he does so, his efficiency will improve dramatically.

Williams has played 936 games, while starting just 110. Over the past three seasons, he has started just 22 games. Last season, he started once, played just 26.6 minutes per game, and still averaged 20 points. Per 100 possessions, Williams (35.5) was almost as good a scorer as LeBron James (36.2). His play could be even more important if the Clippers use a load management plan to monitor the minutes of Kawhi Leonard and Paul George. It seems unlikely that they will both start 75 games.

Zion Williamson, New Orleans Pelicans:  Since the 2010-11 season, the No.1 overall pick has won this award five times. Williamson has a chance to be efficient because he doesn’t have to carry the load night in and night out. New Orleans has veterans like Jrue Holiday and JJ Redick. Williamson is only 6-foot-6, but his 284-pound frame and explosiveness should allow him to be an impact player from the jump.

Williamson is the second heaviest player in the league, behind only seven-footer Boban Marjanovic (291 pounds). Do you want to take a charge from him? #Ouch. The biggest question: how effective can he be away from the basket? At Duke, Williamson shot just 33.8% from beyond the arc. But New Orleans probably won’t be asking him to take many long-range jumpers.