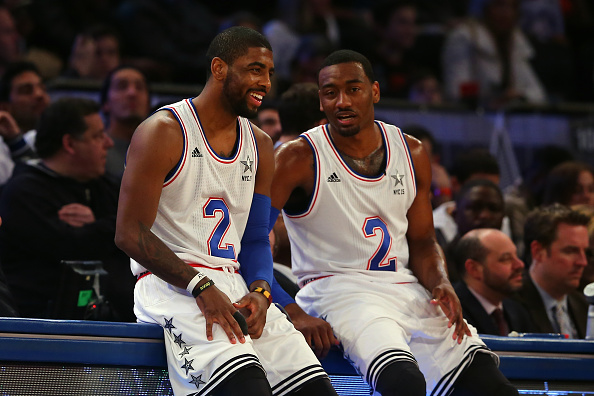 The NBA produces one of (and arguably the best) All-Star festivities year in and year out. It has something for everybody, whether it be the slam dunk contest, the rising stars challenge, or simply the game itself.

However, discussions surrounding the intricacies of the All-Star Game have received much more criticism, and have come under a much greater microscope in recent times.

For instance, as SB Nation’s Tom Ziller points out, John Wall was upset about the first 2016 NBA All-Star game voting returns because he finished behind Kyrie Irving, who up until that point had played in just two games all season. Yet Dwyane Wade and Irving led all Eastern Conference guards.

But we know All-Star voting has been flawed for some time. Back in the 2010-11 season, Yao Ming was voted in as an All-Star starter when he played just five games. That was a clear-cut indicator of problems with the voting, and a very similar situation to what we are seeing this year. It didn’t change then and probably won’t change now. Situations like this can happen with fan voting, and there’s hardly a way around that because leagues want to include the fans in the process to increase interest and build support for players in local markets.

NBA TV’s The Starters expanded on Ziller’s point, debating on Wednesday’s show if the issue of ballot stuffing by local fans could be helped by expanding the size of NBA All-Star Game rosters.

Currently, rosters are limited to 12 players for each conference, with alternates selected for players who have to miss the game because of injuries.

For those concerned with players like Wall missing out because other players get voted in, increasing the rosters to 15 should cover all your bases. For instance, this season Kobe Bryant (solely based on his numbers) probably doesn’t deserve a spot on an All-Star roster, but he’s leading the league in votes. Because he’s Kobe Bryant and because people want to see him in the All-Star Game every year, and particularly this season, considering it is his last. Seemingly every year, we have a farewell entry into the game. Expanding the rosters would allow space for those players, and the ones who actually deserve to be there.

Another benefit of increasing the rosters would be that more teams (ideally) would be represented. This could possibly increase the viewership among some NBA fans who have an exclusive interest in their own team. That seems wild, but those types of fans do exist.

The increase would also give those players named as alternates actual roster spots, which most people probably wouldn’t complain about. When you consider the (somewhat fake) outrage that surrounds some All-Star snubs every year, the idea of now including them would put some folks at ease. It could also remove the commissioner’s choice slots, which doesn’t sit well with some people out there (similarly to David Stern blocking a certain Chris Paul trade).

The Starters‘ J.E. Skeets mentions players like Isaiah Thomas and Mike Conley getting into the All-Star Game with expanded rosters. But the All-Star Game can be looked at as a one-night Hall of Fame game for current players.

The question you have to ask yourself is, do people in other NBA cities buy tickets at their home arenas to see players like an Isaiah Thomas or a Mike Conley? I would think the answer is no. People go out of their way to get tickets to see LeBron James, Stephen Curry, Kevin Durant, and other superstars in the league. That’s the attraction of the All-Star Game. That’s not to take away from Thomas or Conley; they are great players in this league and anybody who questions that is crazy. But the spots are limited for a reason, the NBA wants only the absolute most elite talent in the game for a huge showcase.

But what are we really discussing here? Is anyone going to remember who got snubbed this season? Do you remember who got snubbed in 2008? What about 2009? The rosters as they stand have made for some great entertainment in All-Star games every year, which is because the spots are so scarce and that makes for only the most elite NBA talent to be on display for one night.

Expanding the rosters will give players who aren’t superstars a chance to join that elite level, to showcase their talents on the biggest NBA stage. Regardless, the best players will be at the All-Star game already, so you won’t hear me complaining if nothing is done about it, either.