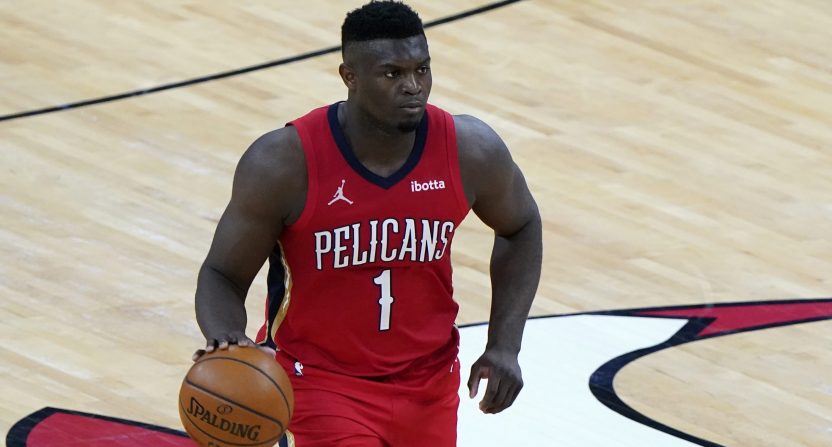 We haven’t seen the best of Zion Williamson, but it’s coming.

In an ecosystem of physical freaks, to watch a 6-foot-7, 284-pound man gracefully drive the baseline and dunk over the best athletes in the world is jaw-dropping. And yet, he probably is still only scratching the surface of what he could be.

The good news for the New Orleans Pelicans is that their young, unprecedented star is healthier and getting better in his second season. According to StatMuse, Williamson (24.4, 60.7 percent) is on pace to become just the fourth player in NBA history to average 24 points on 60 percent shooting in a season. You might have heard of the other guys: Wilt Chamberlain, Kareem Abdul-Jabbar, and Kevin McHale.

Also encouraging has been his durability (so far). Williamson has missed only one game and has already surpassed the total number of games (24) he played last season. That’s important considering his injury history.

New Orleans (11-15) may not make the playoffs in the loaded Western Conference. But this season is all about the continued development of Williamson under new coach Stan Van Gundy. If the 2020 No. 1 overall pick plays a full season at a high level and the Pelicans compete for a postseason spot, consider it a success.

What Williamson is doing now at the age of 20 is terrifying. He’s like a great power tailback. Think Derrick Henry. Once he gets a full head of steam, good luck trying to stop him. When Williamson is in position to attack the basket, he just overwhelms people. He’s the strongest man on the court every night. When you add in Williamson’s quick first step, he’s a unique talent.

In a shootout with another rising youngster in Luka Doncic last week, Williamson set a career high with 36 points while missing just one of his 15 shots. In the first half alone, he was 10-for-10. If the Pelicans got him the ball more, they might have avoided a 143-130 defeat.

That game was just one example of Williamson’s growth. He has improved statistically in every category across the board – both in counting numbers and advanced metrics. He entered this week eighth in the league in player efficiency rating (25.85), ahead of former MVPs Steph Curry (25.73), Kevin Durant (25.14), and LeBron James (24.20).

Possibly the biggest jump Williamson has made has been in his playmaking. He’s averaging almost an assist more per game (2.9 after 2.1 as a rookie). Williamson is initiating offense in transition and in the paint.

Here’s a great example, pointed out by Will Guillory of The Athletic, of Williamson finding an open Josh Hart for a corner three-pointer:

This play is a good example of the maturation we're already seeing from Zion.

In the past, he would've spun off CP to get a shot with his left or swung it immediately once the double came.

Instead, he took 2 dribbles, waited for the Hernangomez screen and threw a perfect pass. pic.twitter.com/gr9apjORws

This is significant improvement. At the tail end of last season, Williamson struggled while Memphis’ Ja Morant surged to win Rookie of the Year. In the NBA bubble, the Pelicans went 1-5 with Williamson and were an alarming minus-58 in 104 minutes with him on the floor. The collapse cost Alvin Gentry his job as head coach.

Now Van Gundy is entrusted with the NBA’s brightest frontcourt star. He’s familiar with this task. Van Gundy got the best out of Dwight Howard, coaching him to five All-NBA first team selections and three Defensive Player of the Year awards. Howard powered the Orlando Magic to the 2009 NBA Finals.

Williamson probably will never be the defender Howard was. Few players in league history have been. Williamson is still learning. A few weeks ago, Van Gundy praised his young forward’s defensive effort after a 123-101 victory over the Phoenix Suns.

But Williamson and the Pelicans still have problems. They’re fourth-worst in the league in defensive efficiency. And there remains lingering questions about Williamson’s long-term health. Injuries have been a concern dating to high school.

Williams missed five games in his lone season at Duke with a knee injury. He sat out the first 44 games as a rookie with New Orleans following surgery to repair a torn lateral meniscus on that same knee. How much have his knee issues affected his explosiveness? That has been the subject of much debate. Many have wondered if Williamson is simply carrying too much weight.

Last month, Hall of Famer Karl Malone called out Williamson, saying: “I love Zion Williamson. Zion needs to get into shape. If he don’t get in shape, we might not ever know his full potential.”

Malone may have a point. Fewer pounds might reduce stress on that knee. But it’s also important to remember that Williamson will only turn 21 in July. He’s a work in progress. Let’s see where Williamson is a year from now. Maybe the knee will be stronger. Maybe he’ll weigh a little less.

And maybe Williamson will be one of the best players in the NBA.