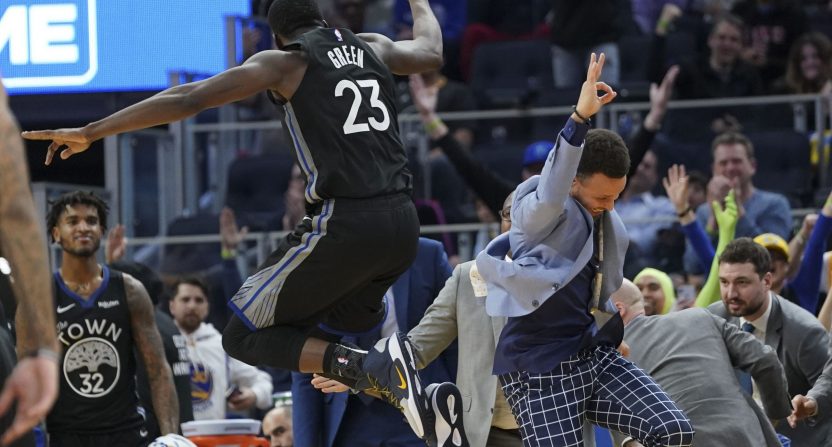 The Christmas Day NBA slate has been a bit underwhelming today, to be honest. The Celtics easily took out the Raptors, and the Sixers handled the Bucks at home in a rare boring upset. (Philadelphia led by 29 in the fourth quarter.)

The Rockets traveling to the Bay Area to take on the Warriors, meanwhile, wasn’t supposed to be much of a contest at all. After all, this Warriors team, without Steph and Klay, is sitting at 8-24, with no playoff hopes or aspirations to speak of this season. The Rockets are 21-10, and while the James Harden-Russell Westbrook pairing is still figuring things out, they’ve still won plenty of games, and look likely to be a mid-tier playoff seed in the competitive West.

Considering all of that, the 11-point spread seemed about right, and considering the final margin was 12 points, you might think it was. Except for that the Rockets were favored by 11 and lost by 12, giving Golden State the always fun reverse cover.

How’d they do it? Well, they just kind of outplayed Houston all around. Harden had 24 points (on 18 shots), and he also had 11 assists, 6 rebounds, and 3 steals. But what he notably didn’t have: a made free throw. Harden only had one attempt, in fact, the first time he’s gone without making a free throw since March of last season, when he had zero attempts. Without that added scoring boost, the Rockets were unable to generate consistent offense. Westbrook scored 30 points, but took 32 shots to do it. (He missed all of his eight three-point attempts; he’s shooting just 25% from behind the arc on the season.

The Warriors meanwhile have two good to really good players in D’Angelo Russell and Draymond Green, but the rest of the roster has been the issue this season; they were so top-heavy by design in order to keep their big four together for their dynastic run that their depth took necessary hits. Tonight, though, they got plenty of help from unexpected places. In addition to Russell and Green scoring 20 apiece, Damion Lee finished with 22 points, while Glenn Robinson III added 18.

It was mostly just a solid effort, though; the Rockets as a whole only shot 16 free throws, and while they made 14 of them, it’s not crazy for Harden to take more than that in a single game. (He’s averaging nearly 13 free throw attempts this season.) The Rockets are by necessity dependent upon free throws; Harden’s deceptiveness on the perimeter and Westbrook’s crashing, physical driving style are both designed to get calls and earn extra points at the stripe. On nights when the other team is either avoiding fouls or when refs aren’t giving them the 50/50 calls, they might struggle.

Also James Harden was sometimes just randomly taking entire possessions off on offense, which is a new wrinkle for Harden:

Unfortunately, those situations are both likely to happen with more frequency in the postseason, which might not bode well for Houston. (This isn’t new, obviously.) But at least we got a fun, weird result on Christmas Day, in the game that seemed the easiest to predict beforehand.