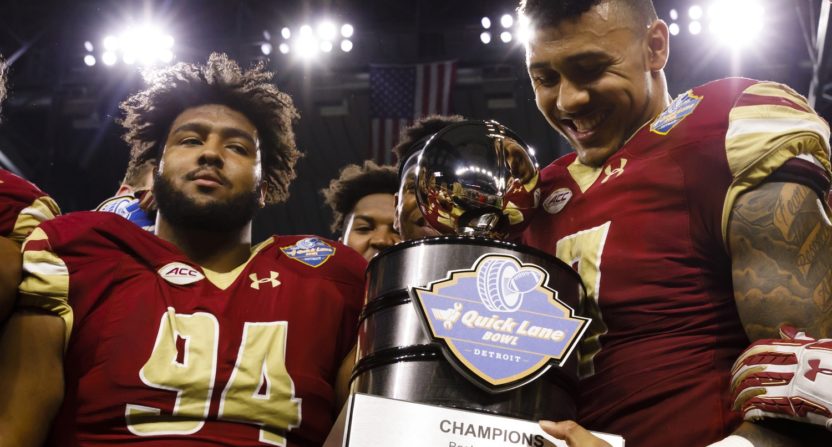 Bowl season will be upon us before you know it. It’s like Christmas in December for college football fans. It’s also the one time of the year when college football players can openly receive free gifts because of some arbitrary loophole that doesn’t really make sense and makes you wonder why they can’t just always accept free gifts from sponsors. But of course, that’s a question to be answered another time.

Last year, we ranked out every bowl game based on what kind of swag they gave away to the players involved. Because so many of the games are run by the same entities (ESPN, mostly) and share sponsors, it got a little repetitive and hard to differentiate. (There’s only so many times you can compare Fossil watches.)

So this time, we’re going to simply call out the 10 best freebies that we see (H/T to Sports Business Daily for compiling the whole list). You might disagree (maybe you really, really want a Fossil watch) but regardless, we’re just glad the players are getting something (anything) as a thank you for the millions of dollars they’re about to generate for old, rich people.

This was our pick for the No. 1 gift last year, but the truth is that for all we know it might be the worst gift. It could literally be anything. What’s iconic to one person is trash to another. It might be a framed team photo or a participation trophy or the same Fossil watch 58 other bowl games are giving away. Then again it might be an Infinity Stone. So we’re going to keep “iconic gift” on the board if only for it’s potential, even though no one’s ever gone wrong underestimating bowl games and their penchant for taking care of the players.

Belt Buckles are in! These will be included in the player gift bags along with other various pieces of #bowlswag pic.twitter.com/KBtn07G29D

The Texas Bowl gives out quite a few gifts. They’ve got an entire gift suite as well as an Academy Sports + Outdoors gift card and an Adidas duffel bag. But it’s the belt buckle, a spartan and utilitarian gift if there ever was one, that truly stands out. When was the last time you bought a belt buckle? Have you ever bought a belt buckle? And yet, anytime you see someone with a custom belt buckle, you think to yourself, “that’s a cool belt buckle.”

The first of many gift cards to make the list. Look, a gift card isn’t flashy. A gift card isn’t sexy. But a gift card is the closest thing you’ll see to a bowl game handing out cash, which is perfect for the players, and it’s basically an all-you-can-eat opportunity for a bunch of big hosses at a place full of meat, potatoes, and Bloomin’ Onions. Let them eat steak.

If all you knew about college football players is what they were wearing getting off the bus when arriving at the stadium, you’d assume quality headphones was the single most important thing in the world to them. Sure, chances are that many of them have already invested in good gear to keep out the bad noise and keep in the good noise but who is gonna say no to some free, high-quality headphones for next season? The Foster Farms Bowl is also giving away a “coin,” which we’re going to lump in here as well because who doesn’t love a good coin?

Cam Phillips (Belk Bowl MVP) said other than the game, his favorite part of this week was the shopping spree pic.twitter.com/AMipM3noxl

We’re not entirely sure how much money this shopping trip is for but we hope that there are camera crews and that they hold this shopping trip in the middle of a busy weekend day because we want video of the 100+ burly football players barreling through a Belk while casual shoppers try to juke them in order to get that pair of jeans before they do. We’re suckers for the visuals. Of course, we hope all the players this year will avoid the fate of Arkansas TE Jeremy Sprinkle, who was caught shoplifting during the 2016 trip and missed the game. Whoops.

I just found out my alma mater is playing in the Liberty Bowl only bc someone Instagrammed pics of the team bowling at Bass Pro Shops.

We don’t know how much the players get but again we want to see a video of all these football players traipsing around a Bass Pro Shops while a bunch of grizzled hunters and fishermen side-eye them for taking up too much space near the gear. There’s also a team welcome party at the Bass Pro Shops store, which means you really get a maximum fill of everything you’ve ever wanted or needed out of Bass Pro Shops.

It's official! No. 13 @StanfordFball will be taking on No. 15 @TCUFootball in this year's Valero Alamo Bowl on December 28th! pic.twitter.com/W4oFHieLYH

“Echo Show brings you everything you love about Alexa, and now she can show you things.” That’s the official line from Amazon. “Now she can show you things.” That can go in so many directions we’re a little afraid to dive deeper. Still, retailing for $229.99, that’s a solid piece of equipment for college students to have so they can spend what little money they have even easier than before.

What will Auburn and Central Florida players receive as gifts from the Peach Bowl? These goodies:

This is cash, basically. It’s not cash-cash, but it’s pretty much cash. This is almost the ideal gift.

We’re fans of shopping sprees and we’re fans of gift cards, so when you basically combine the two we’re going to consider it a winner. Since it’s Best Buy, it’s basically a chance for the players to customize their own gift. So instead of getting a watch or headphones or an Amazon Echo, you can actually choose which one of those things you’d actually want (we’re guessing not the watch), especially at $400. Bonus points for not making the shopping spree in Camping World because that would mean way less fun stuff and way more tents.

Loving my life size Fathead from the bowl game! ?? pic.twitter.com/E3Rp1afziy

1. Quick Lane Bowl: life-sized Fathead decal for each participant of his likeness

The Quick Lane Bowl gets it. This was our No. 2 pick last year but we’re bumping it up to No. 1 because, c’mon, how cool is that? While some of the players in this game may have a future ahead of them when personalized Fatheads will be produced en masse, it’s more than likely this is the only opportunity any of them will have to get one. And that’s ultimately the point of these gifts.

They should feel like something that you wouldn’t otherwise get. They should feel special. Free watches and coolers and “coins” are nice and all but the Quick Lane Bowl went the extra mile to help immortalize each player for all time to come. Fatheads are the modern Greek statue and now everyone on the Duke and NIU football teams is a Greek God.

Then again, based on the above tweet, we may have oversold this…