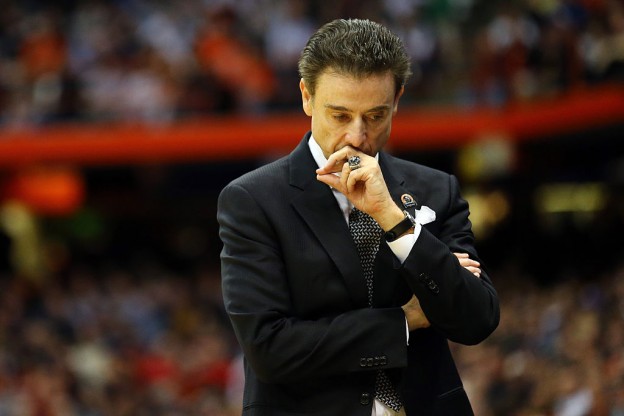 Welcome to Five College Basketball Questions You Need Answered. Any retransmission of this column without the express written consent of the author is prohibited and punishable by Rick Pitino flipping you the bird (more on than later).

If you’re a skeptic, that’s understandable. After all, this is South Carolina we’re talking about. Trusting Bernard Madoff with your 401K inspires more confidence than the Gamecocks.

South Carolina hasn’t started a season this well since prior to World War II. Not only are the Gamecocks one of five remaining unbeaten teams in the country, but they haven’t been this good since 1933-34, when they were 17-0.

The Gamecocks were picked by the media to finish 7th in the 14-team Southeastern Conference. They are winning with five players averaging in double figures – and that doesn’t even include freshman guard PJ Dozier (8.4), a McDonald’s All-American.

South Carolina’s schedule makes it difficult to gauge. Its strength of schedule ranks No.299 out of 351 schools by kenpom. Its toughest opponent probably has been Tulsa. The Gamecocks entered the Associated Press top 25 poll last week – the first time they had been ranked in any poll since 2004.

But it’s hard to take a man seriously who would wear this sweater, let alone this program given its history.

Martin fared well at Kansas State and his decision to leave for South Carolina was curious. There are very few bad major conference jobs. South Carolina fits into that category. The Gamecocks haven’t won an NCAA tournament game since (gulp) 1973. The last time they were nationally relevant as a Final Four contender was in the late 1990s when South Carolina-based band Hootie and Blowfish was popular.

In 1997, as a No.2 seed, South Carolina famously lost to Coppin State. The following year, it was upset as a No. 3 seed to Richmond.

Of course, that has nothing to do with the current team. Still, it would be wise to take a wait-and-see attitude. South Carolina might not face a ranked team until it visits Texas A&M in early February.

I got Rick flipping off UK fans on video

No.2 Did Rick Pitino really give Kentucky fans the middle finger?

That Pitino video is an odd combination of the Zapruder film and the Rorschach test. It seems inconclusive and Pitino has denied making an obscene gesture. However, it’s also certainly seems possible/ probable that he made the ‘We’re No.1’ gesture. If Pitino did, one could understand how his emotions may have boiled over in a rivalry game.

The Louisville vs. Kentucky rivalry is the Commonwealth’s version of Gangs of New York. Pitino wrote on his blog that: “it’s an extremely emotional and difficult experience for me to coach in Rupp Arena.”

Many Kentucky fans will always view him as Turncoat Rick who guided the UK program to the 1996 national championship and won the 2013 title with Louisville. Even a veteran like Pitino has a breaking point on a basic human level. This was yet another loss to John Calipari and the Wildcats (1-8 since Cal came to Lexington).

Pitino didn’t do himself any favors when he didn’t speak to the media after the game. (He’s done this a few times already this season). Yet perhaps Pitino had a valid excuse for avoiding the television cameras and scribes. Here are some possible reasons:

No.3 How should SMU fans feel about Larry Brown?

Larry Brown is back on the sidelines after serving his nine-game suspension. Last week, he coached the team to victories over Kent State and Colorado.

Must be a weird time at SMU. The 17h-ranked Mustangs (11-0) are off to their best start since opening the 1997-98 season 10-0. The punchline: no matter how well they play they will have nothing to show for it in March. The program is ineligible for the NCAA tournament because it’s serving a postseason ban due to NCAA sanctions.

Should SMU fans be angry at Brown, the NCAA, both? The silver lining to all this is that coach-in-waiting Tim Jankovich has gained valuable experience running the show in Brown’s absence.

No.6 Xavier (12-0) at No.16 Villanova (10-2) on Thursday. This new-school Big East noon match-up is a great way to start New Years Eve. Xavier is off to the best start in school history and could be a Final Four contender. Winning at Villanova would certainly establish the Musketeers as possibly the best team in the nation.

No.5 Who’s a walk-on America should root for?

Northwestern’s Charlie Hall has played in only five games. In eight minutes played this season, he hasn’t taken a shot or scored a point. Still, you have to embrace anyone with Seinfeld ties. Hall is the son of Julia Louis-Dreyfus, who is best known for playing Elaine on Seinfeld. Louis-Dreyfus and her husband Brad Hall are Northwestern alums.

My son says I should tweet more original content-so here goes: My son is driving me fucking crazy. #MerryChristmas

Hopefully, he’s a better dancer than his mother.