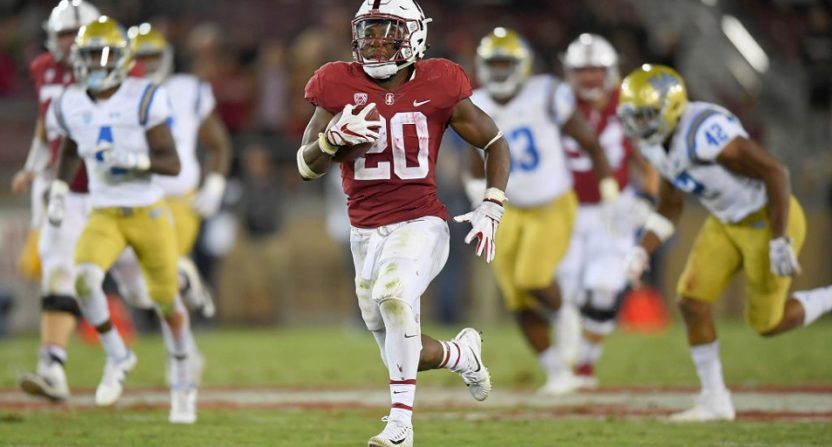 College football is back with a full slate of games to keep you busy this Labor Day weekend. Our first chances to see some of this year’s top players and teams as well as our first glimpses at some programs looking for some early statement wins is here, and this weekend should be a fun one to soak in wherever you may be.

Here are five storylines to keep an eye on this weekend around college football, beginning with a couple of headlines for Friday night’s action.

Stanford’s Bryce Love and Wisconsin’s Jonathan Taylor will be the headlining players on Friday night, with each looking to get their respective teams off on the right foot at home. And both should have a chance to rack up the yardage on the ground in their season opener.

Love and Taylor were second and third, respectively, in the nation when it came to rushing yards per game last season. Love, a Heisman Trophy finalist, was one of two players to break the 2,000-yard mark (San Diego State’s Rashaad Penny being the other; Penny was the nation’s rushing champion last season but he is gone now). Taylor came close to joining them, rushing for 1,977 yards for the Big Ten West Division champion Badgers. Friday night will be great opportunities to get off to the races in a season-long rushing title race that could end up sending each to New York City for the Heisman Trophy presentation this season.

Flipping back and forth between the two games between ESPN (Wisconsin vs. Western Kentucky) and FS1 (Stanford vs. San Diego State) should be fun as you try to catch each rusher’s next long run. Both games are scheduled for 9:00 p.m. ET.

A thought I have been carrying with me all offseason is that no team is going to go through the entire Pac-12 schedule without taking at least one loss this season. As good as Washington is, that rule will apply to them as well. And, as we have seen in the past few years, that is a loss that could prove costly for the Pac-12’s playoff hopes.

There is no question in my mind Washington has the best team in the conference and is built for making a run to the playoff for the second time in three seasons under Chris Petersen. The problem is the Huskies are in a weird must-win situation in Atlanta this weekend against Auburn. Should Washington go home with a loss this weekend, that will put a lot of pressure on the Huskies to not lose a game for the rest of the season, which means they have to go on a 12-game winning streak including the Pac-12 championship game in order to make a legitimate playoff case.

Getting a win against Auburn will be tricky. Even though Washington is the higher-ranked team, it is Auburn that is a slight favorite in what should essentially amount to being the SEC’s capital. Auburn’s last two trips to Atlanta resulted in losses — the SEC championship game against Georgia and the Peach Bowl against UCF — but Auburn is well-built to be a threat to Washington. The quarterback showdown alone should be enticing with Jake Browning back for the Huskies and Jarrett Stidham continuing to man the Auburn offense.

Auburn’s going to be a fun team to watch this season. So will Washington, but the Pac-12 favorites may not be able to afford a loss here.

Notre Dame is the perfect litmus test for Michigan’s offense

All offseason, the expectations for Michigan have been all over the place. I have seen people (not just Desmond Howard) putting Michigan in the College Football Playoff, merely playing for the Big Ten title, and having Michigan finish as low as fourth place in the Big Ten East. To be upfront about this, my game-by-game predictions for Michigan had them finishing in fourth, but that is largely because I want to see the supposed improvement of the offense for myself before I feel comfortable forecasting what’s going to happen in Ann Arbor this season.

The addition of Shea Patterson at quarterback should help the entire offense improve, and I suspect that will be the case. However, my question is whether or not that is the cure for Michigan’s offensive woes so much so that it transforms the Wolverines into the team to beat. This is why I have been sidestepping questions about Michigan with the disclaimer that I really want to see what happens against Notre Dame before I can get a decent read on the Wolverines. Opening in South Bend is a good challenge and a good opportunity to see what Michigan is made of. The defense will be great, but the offense is going to have to show me something.

A lot of pressure is being put on Jim Harbaugh this season, which I understand and suggest is fair to an extent, but Harbaugh had Michigan on the cusp of a Big Ten championship game appearance and a possible spot in the playoff just two years ago until they came up one defensive play short of beating Ohio State and ultimately dropped into third place in the division as a result. This should be Harbaugh’s best team he has had since his arrival in Ann Arbor. While a loss to Notre Dame would not shock me at all, I also will not be ready to write them off if they go home without a win as long as there are signs of improvement on the offensive side of the football.

To me, Michigan is a wild card in the Big Ten this season.

The importance of Boise State vs. Troy

A night after watching UCF dismantle UConn on the road behind McKenzie Milton’s five-touchdown performance, the Group of Five spotlight shines on Boise State and Troy on Saturday night. Already being hyped as a game that could be a major factor in the Group of Five race, the Broncos look to go to Troy and return home with a win. Boise State is a double-digit favorite on the road for a reason, but it would be unwise to suggest Troy gets rolled at home.

The Sun Belt Conference is one of two Group of Five conferences yet to make an appearance in the New Years Six under the current College Football Playoff bowl structure. If Troy is going to be the first team to represent the Sun Belt in a big bowl game, then a win against Boise State is an absolute must. The best defense in the Sun Belt and arguably the conference’s best offensive line give the Trojans a solid foundation to make some things happen. A win against Boise State would serve them well, but Troy will still have to get by Appalachian State and Arkansas State in their conference in order to qualify for the Group of Five’s reserved seat at the New Years Six table. Boise State would still have a shot as Mountain West Conference champion, should things play out in conference play as expected.

At the moment, UCF is the team to chase down, but the winner of this game puts themselves in second place in the hunt after the first full weekend of action.

Oklahoma is going to blow away FAU

It’s been fun to talk about all offseason, but Lane Kiffin leading FAU into Norman, Oklahoma to take on the defending Big 12 champions is not going to be as entertaining as people seem to think it will. Oklahoma is far superior to FAU, and the chances the Owls go to Oklahoma and give the Sooners as good a battle as some want to believe possible are not that great in my eyes. I would certainly love to see it, seeing as this game is getting a national telecast in the early afternoon slot, but my senses tell me the Sooners are a three-touchdown favorite for a reason.

FAU will have their share of highlights this season, but Oklahoma is going to be just fine on offense after Baker Mayfield. Kyler Murray is taking over an offense he can thrive in, and running back Rodney Anderson should put up some good numbers on the ground. Meanwhile, Oklahoma’s defense will be more than good enough to routinely shut down FAU.

Here’s hoping Lane Kiffin has a few tricks up his sleeve to prove me wrong, but FAU’s best will come after this game (I’m already eyeing up that road game at UCF on September 22).