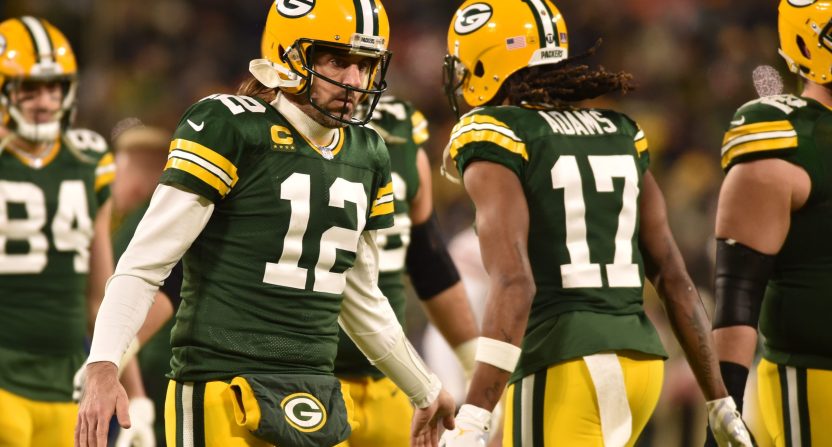 When Aaron Rodgers put up an Instagram post on Monday evening that seemed to potentially imply that he was saying goodbye to his Green Bay Packers, the signals went up amongst the NFL world that he might be getting ready to make an announcement about his future.

Then, when people put it together that Rodgers was set to appear on The PatMcAfee Show on Tuesday, it seemed logical that this was the precursor to a major announcement about whether or not he was returning to the Packers, deciding that he wanted to play elsewhere, or even retiring.

Rodgers showed up on McAfee’s show on Tuesday as advertised and immediately put the kibosh on any rumors and expectations about what he would talk about it, saying that he was not making any special announcement today.

"There will be no decision on my future today" ~@AaronRodgers12#PMSLive pic.twitter.com/TlNG5x3th5

“Let me just put this disclaimer out there right away for the few people who are tuning in just for specific news or decision. There will be no decision on my future today,” said Rodgers, knowing why so many people were tuning in. “I just got out of a 12-day punch of karma. Look that up.”

"There's nothing cryptic about gratitude.. I was going thru some pictures from the last year & felt an intense amount of gratitude for the life that I have & the lessons I've learned" ~@AaronRodgers12#PMSLive pic.twitter.com/htggxJBirY

Rodgers says that he was doing a cleanse for the past two weeks and emerged from it this weekend, leading to his gratitude post on Monday evening. And if anyone read anything further into that, well, that certainly wasn’t his intention…

Aaron Rodgers claims he doesn't think about what the reaction might be when he posts something on social media. pic.twitter.com/zEDPhv5YHh

Played us like a fiddle. Have a good day, everyone.

If there was anything interesting to be gleaned from the interview regarding his status, there was a comment about the fact that the Packers might want to consider placing a franchise tag on a “specific guy” who perhaps deserves that distinction. And that doing so might reflect positively on Rodgers’ sense of the situation.

“Today, I believe, might be the first day to tag players. In Green Bay, there’s this one specific guy who’s like the best guy in the entire league in what he does. He wears, I think, number 17, you might have heard of him,” said Rodgers, referring to Davante Adams. “So there’s obviously the opportunity to tag him at some point and both parties probably want that done. You’d rather get a long-term extension done.”

While Rodgers didn’t make the announcement that many expected, the bit about Adams certainly sent the message that was intended.

Aaron Rodgers points out today is the first day to tag players.

Essentially pointing out Davante Adams status is a factor in his decision for 2022.

Sounds like QB Aaron Rodgers wants to see what happens with WR Davante Adams before making his decision.