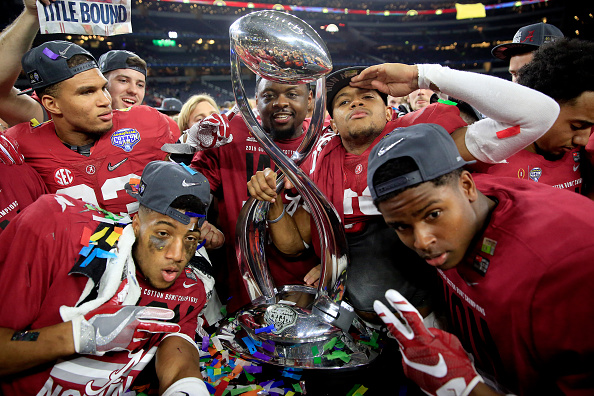 We’re just one week away from the College Football Playoff Championship game, and that means plenty of time to analyze and dissect anything and everything between Alabama and Clemson. However, the game may be decided even before getting on the field.

How so? A strange set of circumstances involving school start dates, that’s how. ESPN.com is reporting that Clemson starts classes on Wednesday, while Alabama won’t return for the spring semester until January 13.

That means the Tigers fall under the NCAA rule limiting teams to 20 hours of team activity per week during school being in session. It also means Alabama will not fall under that same rule, and will have unlimited time to spend prepping for the biggest game of the college football season.

Of course, Clemson can take advantage of unlimited time together through Monday night, but must adhere to the four-hour per day limit from Wednesday on. That means a maximum of 20 hours can be spent before heading to the College Football Playoff championship game.

Alabama will have no such limit and can practice and do team activities at will.

Before you think this situation is unique, it’s worth noting that last season, #4 Ohio State was able to practice with no limits and and #2 Oregon was subjected to the same rule that Clemson will be forced to adhere to this week.

Just how big of advantage is the disparity in practice time and game prep? According to Ohio State players who were on the end of unlimited practice, it’s not a big advantage at all.

“I would say the one thing that was advantageous to us was we weren’t worried about getting a new syllabus or shaking a professor’s hand and trying to figure things out for a semester,” Perry said. “Is that a huge advantage? No, because you go the whole season doing the same thing anyway. You’re in class and you’ve got to game plan.”

Clemson will also have to account for the game, which will count as three hours (no matter the actual length) towards that 20-hour limit.

On the plus side, Clemson has been operating with that 20-hour limit all season long, so the routine shouldn’t be unfamiliar to the Tigers players, coaches, or staff. They will know how to handle game planning and practicing, as well as working in outside film work and other activities.

It isn’t as if classes are going to start out with 25-page sourced papers due by the next class period either. Players will get syllabi and head off to the National Championship game.

With an undefeated season and a national championship on the line, it sure would be nice for all things to be equal though.

Will history repeat itself, as the team with unlimited time takes home the title? If so, perhaps it is time for the NCAA to revisit this issue and for the national title contestants to each have the same time with their teams.