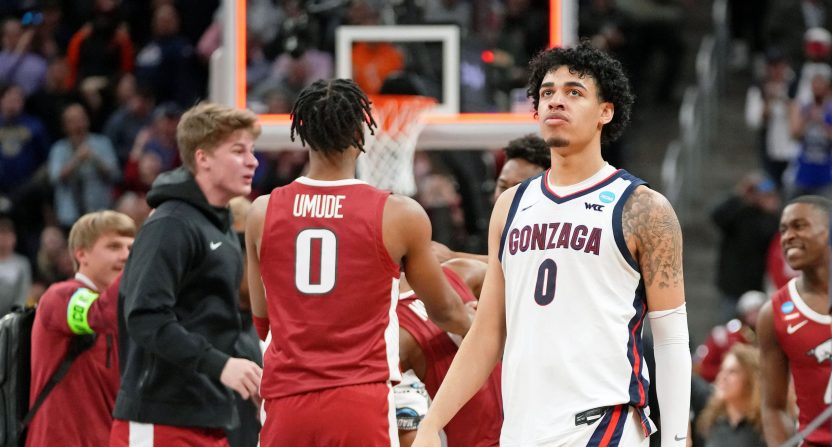 The remainder of March Madness will go on without Gonzaga.

🚨 THE NUMBER 1 OVERALL SEED HAS FALLEN@RazorbackMBB pulls off the UPSET of (1) Gonzaga! #MarchMadness pic.twitter.com/aoTMsjkusJ

As the No. 1 overall seed, Gonzaga was naturally a popular pick. The Bulldogs going down drew a big reaction.

36% of brackets had Gonzaga winning it all 🤯 pic.twitter.com/hIrcNGQn2A

No sports book had more money on Gonzaga to win than @CaesarsSports.

A whopping 27% of the money was on Zags to win it all at that book.

Stop calling Gonzaga a blue blood man. A whole bunch of No. 1 seeds and 0 national championships.

Of course, there are two sides to an upset. While a lot of focus goes to the losing team, the winning team must get its proper credit. Arkansas got a lot of that on Thursday.

I respect Muss told his guys that if they didn't think they could win then don't get on the bus. Arkansas is playing like the more confident group tonight

Arkansas is shooting better from three than Gonzaga. Arkansas was 314th nationally in three point accuracy, Gonzaga was 22nd.

Arkansas basketball at least knows how to wrap up.

Might teach their football team a thing or two

As is the case in every game, there was a third team on the floor. And in what has become an all-too-common theme during the tournament (and in college basketball in general), the officiating was a major talking point.

Respect to Arkansas but they got blessed by the officiating big time.

Looking forward to seeing if anybody actually tries to defend the officials after this mess of a performance in Gonzaga-Arkansas.

Neutral observer here, #Gonzaga is getting screwed by the refs. Sadly, the poor officiating is THE story of the 2022 #NCAATournament #MarchMadness

The refs know Gonzaga doesn’t have an online community like Hogville that could dox their entire families. They’re just working smarter

They fouled Chet out on a garbage call and somehow missed the Arkansas guy stepping 9 feet out of bounds. College basketball refs — making us feel better about NBA refs one game at a time!

Gonzaga would have lost anyway but those last two fouls on Holmgren were a joke.

Gonzaga has long been one of the top college basketball programs in the country. The Bulldogs have made every NCAA Tournament since 1999 and have generally made deep runs. Gonzaga finished as the runner-up in 2017 and 2021 and made the Elite Eight in 2019. A National Championship victory, however, remains elusive.

The win over Gonzaga moved Arkansas into the Elite Eight for the second straight season. The Razorbacks are searching for the program’s second NCAA Championship, with the other coming in 1994.