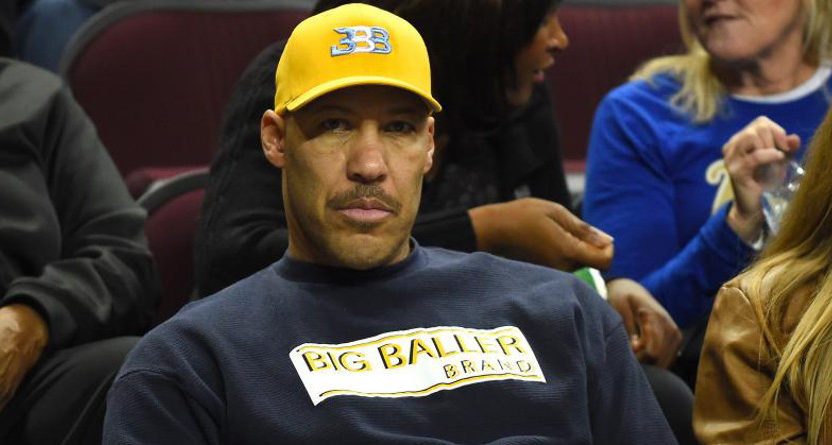 There has been a lot of anger and frustration lately with LaVar Ball as some people have had just about enough of his antics. In fact, NBA coaches have even threatened a mutiny against any media outlet or reporter who interviews the elder Ball after his calling out of Luke Walton last week. Stan Van Gundy said he’d cut off extra access to ESPN for interviewing Ball, Rick Carlisle said it was reprehensible, and Steve Kerr said it was part of a larger societal problem.

With the anger from NBA coaches comes the continual refrain from fans and media alike that there should be a commitment to just ignore the Balls and LaVar specifically. If you pretend it’s not there, maybe it’ll just go away like it’s the make-believe monster under your bed or something. It’s like there’s a competition for who can take the high ground in the moral dilemma of covering LaVar Ball.

The front of https://t.co/A0EAxZ9l7u’s main page right now if you scroll down like 3 stories from the top. This is actually becoming hilarious. pic.twitter.com/S18g9AhxUu

This is the @ringer's NBA page right now pic.twitter.com/EY8Oy9RYQH

Kerr’s take is probably the best one because it’s not just a media thing or a basketball thing but a celebrity thing. Why do all these outlets (including this one in truth) cover LaVar Ball and the Ball family so much while constantly wishing they could be writing about anything else?

Sometimes it’s as simple as that. And nowhere was that more evident than the debut of LiAngelo and LaMelo Ball for the Lithuanian basketball team Prienai Vytautas. Not only did they bring the younger Ball brothers over to play professional outside the auspices of the NCAA, they created a friendly competition against other teams outside of their actual regular season just to give the Balls more playing time.

The first of those games was streamed on Facebook on Tuesday. And an insane number of people watched. At times, there were over 100,000 people watching through Facebook Live. SB Nation says the number of actual views for the game were over 1.5 million.

On the Facebook stream, the Lithuanian broadcasters said since the Ball brothers joined the team, Vytautas' Instagram feed has grown from 1000 followers to over 52,000. Over 100K people watching their debut online. The Ball's move the needle.

Think about that. I mean really let that sink in. 100,000 people were tuned in to watch a basketball game in a COMPLETELY MADE UP COMPETITION CALLED THE BIG BALLER BRAND CHALLENGE IN LITHUANIA because of the Ball family. One. Hundred. Thousand. People. Do you realize that’s a bigger audience than some MLS games get on actual television? FS1 and NBCSN would give anything to have that many people watch some of their programming. It’s absolutely nuts.

Even a simple tweet of a video highlight from one of the Balls from the pregame warmups has drawn over 500,000 views on Twitter.

Good to see @MELOD1P & @LiAngeloBall back on the court together ?

How can you call this Lithuanian odyssey anything but a success after seeing those kinds of numbers? Sure, Prienai Vytautas was probably taking a risk in bringing the Ball Family Circus halfway across the globe. And yea, it’s kind of silly to see an exhibition game in Eastern Europe plastered with Big Baller Brand logos everywhere. It’ll probably even go horribly wrong at some point. And along the way, there will be moaning and groaning and hand-wringing from the media and concerned people on Twitter asking why we’re even paying attention to it in the first place.

But we are paying attention to it. That’s an indisputable fact. And to try to ignore LaVar Ball would be to try to ignore something and someone that obviously a ton of people are invested in.

In truth, it’s nothing more or nothing less than our nation’s obsession with celebrity. Whether you’re Paris Hilton or Kim Kardashian or LaVar Ball. We live in a time where a reality television star and real estate mogul got elected President of the United States and there’s serious momentum for a television talk show host to run in 2020 after giving an award show acceptance speech. Should it really be surprising that the Big Baller Brand Challenge is reaching such huge audiences on Facebook Live?

If you really want to remove LaVar Ball from your life, you first have to convince hundreds of thousands of people that he doesn’t matter. And that’s after months and years of everyone from ESPN to Fox to CNN to WWE Raw putting him on national television. Good luck with that.

There are probably cash-strapped teams around the world that are calling up LaVar now to bring him to their country to do another exhibition series because of the financial success in Lithuania. At this rate, Lonzo might as well quit the Lakers and the Balls can just make millions being basketball barnstormers.

Wherever they go from here, the Balls have reached that celebrity crossover status where 100,000 people will even watch two kids who have never played in the NBA play an exhibition game in Lithuania. Whether you like it or don’t like it, you better learn to live with it because the Balls are going to be with us for a long time.