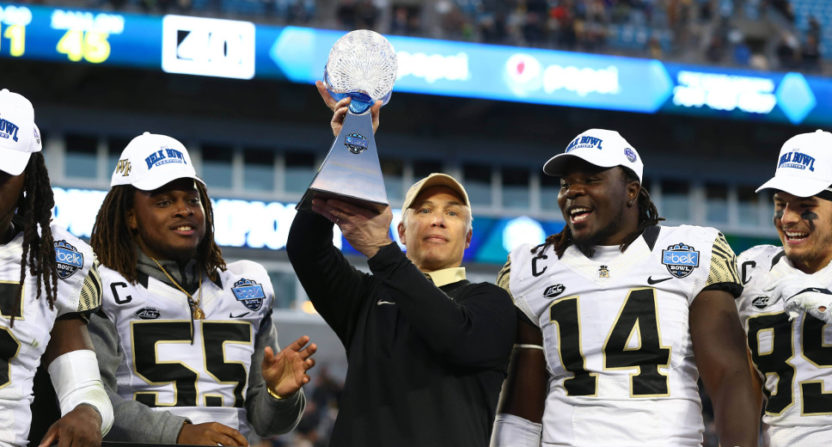 Friday’s Belk Bowl between Wake Forest and Texas A&M saw a whole lot of offense. Both the Demon Deacons and Aggies put up plenty of yards and points, with Wake Forest eventually coming out with a 55-52 win in the highest-scoring bowl so far this season and the highest-scoring game in the 16-year history of that bowl (formerly known as the Continental Tire Bowl and the Meineke Car Care Bowl).  Here are five notable takeaways and highlights from the game.

1. MVP John Wolford didn’t even post the game’s top passing yardage total: Wolford, the Wake Forest quarterback, had a remarkable day, completing 32 of 49 passes for 400 yards and four touchdowns. And he was named a deserving winner of the game’s MVP trophy. But he didn’t have the day’s top yardage total; that would be Aggies’ quarterback Nick Starkel, who completed 42 of 63 passes for 499 yards with four touchdowns and an interception. Wolford posted a similar completion percentage (65.3 per cent to 66.7 per cent), didn’t throw a pick, averaged more yards per completion (8.2 to 7.9), and was also effective on the ground (15 carries for 68 yards, 4.5 yards per carry) so there’s a case he had the better day, but Starkel had an amazing outing as well.

And this wasn’t even Washington’s longest catch of the day. That came in the first quarter, where he recorded a 50-yard catch and run touchdown to make the score 14-7 and bring Wake Forest back within seven:

Washington finished the day with nine catches for 138 yards and a touchdown, and remarkably enough, none of those were game-high totals. Those honors went to the Aggies’ Christian Kirk, who had 13 catches for 189 yards and three touchdown with a longest catch of 52 yards. But Washington definitely recorded some highlights.

3. Christian Kirk threw a great stiffarm: Speaking of Kirk, though, he had some impressive highlights of his own, including this short third-quarter reception that looked to be for a loss or a minimal gain when he was surrounded by defenders. But Kirk then threw a great stiffarm on one defender, avoided two others and stayed in bounds for the touchdown, which helped A&M pull back within three points.

4. The teams combined for 361 rushing yards: A shootout like this with almost 900 passing yards often sees not much focus on the ground game, but that wasn’t the case here. In addition to Wolford’s 68 rushing yards, Matt Colburn recorded 150 yards and a touchdown on 21 carries (an average of 7.1 per carry), and Wake Forest finished with 246 rushing yards overall on 48 carries. Texas A&M went to the air more often, but they still notched 115 rushing yards on 31 carries.

5. This all started with a blocked punt touchdown: The first score of the game came just three minutes in, and it came after Texas A&M punted on their first possession (a 48-yard drive from Shane Tripucka, grandson of legendary NCAA, NFL, AFL and CFL QB Frank Tripucka) and Wake Forest’s offense was trapped in their own end. Two runs and an incomplete pass led to the Demon Deacons facing fourth and six from their own 19, and when Dom Maggio dropped back to punt, Deshawn Capers-Smith broke through and blocked the punt. Charles Oliver then recovered for the touchdown:

That proved to be quite the way to kick off a memorable bowl game.