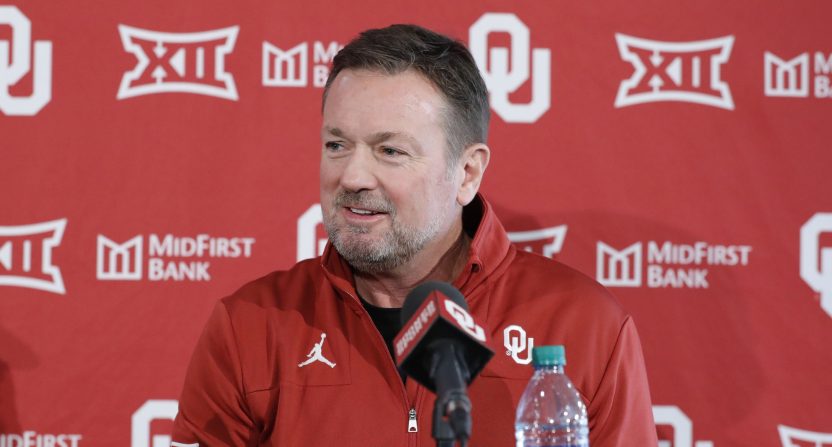 Lincoln Riley’s decision to leave the Oklahoma Sooners for the USC Trojans sent a ripple effect through the football program.

Following that big announcement, quarterback Spencer Rattler announced he would transfer. Then, the school announced that former coach Bob Stoops would be their interim head coach in whichever bowl game they end up playing in.

Stoops’ return comes after he handed the keys to the program over to Riley in 2017 following multiple years as his offensive coordinator. Given how long Stoops was the head coach there and how much he committed to the program, you had to imagine he’d have an opinion about seeing his successor leave for another job.

Stoops was asked Tuesday about how Riley’s departure made him feel and he said he’d keep most of his feelings private but did express some disappointment.

Bob Stoops was asked what his feelings are about #LincolnRiley leaving the #Sooners pic.twitter.com/sagh4sfbf9

“I’m not much on talking about my feelings or thoughts publicly about any of that,” Stoops said. “Disappointed? Sure. The rest of it, that’d be between Lincoln and I, personally. As it should be. I’m not much on making that kind of stuff public.

My initial reaction is what’s best for the program immediately. Recruiting. And the players. First and foremost, the players on our team right now. Reassuring them that they are OU football. They very well [could] be a championship program next year. We will attract the very best in the coaching profession. And the same thing is projected [for] our recruiting.”

It’s a strange time of year for the Sooners, who also aren’t playing in the Big 12 Championship Game for the first time since 2017. But you can’t ask for a better steward of the program than Stoops.