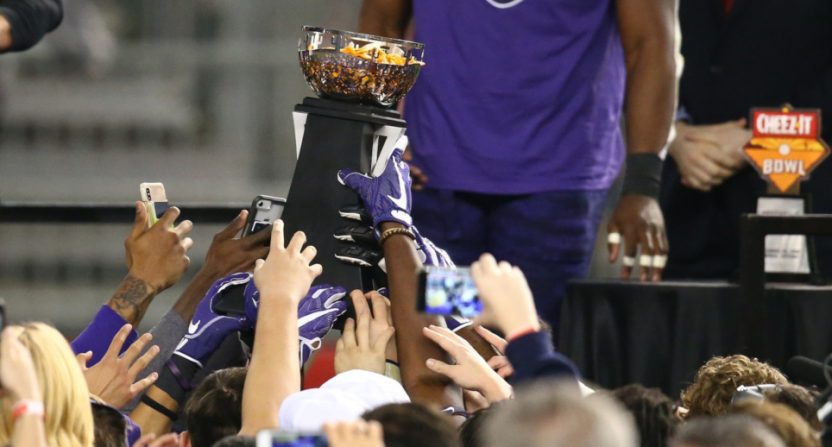 Wednesday night’s Cheez-It Bowl was one of the most ridiculous football games ever played. The TCU Horned Frogs eventually beat the California Golden Bears 10-7 in overtime, but it almost didn’t get there. The game featured nine combined interceptions, tied for third in NCAA history, and six in the first half, the most in any game this season. And two of those picks weren’t even legal passes:

TCU's quarterback has now thrown interceptions
a) after receiving a forward pass from another player
b) after crossing the line of scrimmage
HE DOESN'T NEED YOUR RULES, JUST LET HIM THROW INTERCEPTIONS

We were somewhere around Phoenix, on the edge of the desert, when the drugs began to take hold. Even the bowl’s social media account got in on the Cheez-INT Bowl fun:

@espn @SportsCenter you're more than welcome to use the Cheez-I(N)t Bowl name. 😉

And the game got stranger from there. At one point, Cal switched quarterbacks, leading to the only two senior Power Five quarterbacks still at their first school without starting a game facing each other. (Screencap via Jason Kirk of SB Nation.) 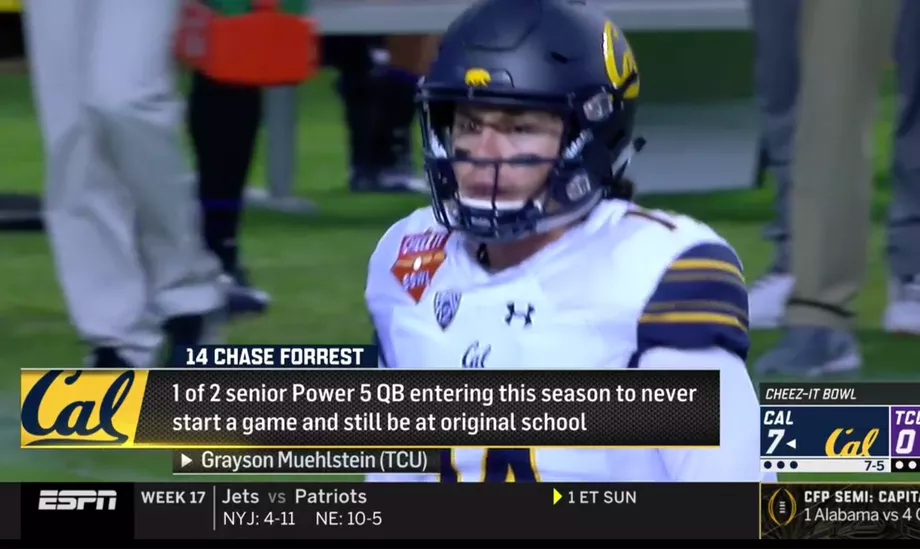 Meanwhile, TCU scored a touchdown at the end of the third quarter on a run that was initially thought to be short and the quarter’s final play. But a review ruled RB Sewo Olonilua was in, sending the game back to the third quarter for the extra point. And running was about all the offense TCU found all night, with Olonilua finishing with 194 yards on 32 carries and primary QB Muelstein finishing seven for 20 for 27 yards with four interceptions (and he only had eight passing yards before the final drive of the fourth quarter.). And even the way this game went to overtime was absurd, with TCU first sending out kicker Jonathan Song, then pulling him for Cole Bunce after Cal called timeout. Bunce missed a 44-yard field goal, the game went to overtime, and even a chain that emphasizes sending games to overtime wasn’t feeling that:

Cal-TCU is headed to overtime, and we’ve never owed you a bigger apology.

Amazingly, in overtime, things got even more dumb. The ninth interception of the game came from Cal’s Forrest, and TCU’s Jawaun Johnson almost took it back for a pick-six. It looked like Johnson could have have ended this game with a score, but 6’6”, 330-pound Cal tackle Jake Curhan somehow managed to track him down at the 15-yard line:

The NINTH total interception of the Cheez-It Bowl almost resulted in a walk-off win in overtime for TCU. pic.twitter.com/1SyUB8bt9G

Oh, and earlier in this game, Curhan was rather less good at preventing an interception return, delivering what even he later admitted was a flop:

Might’ve oversold this one https://t.co/px2Xm2PGbI

So Curhan got some nice redemption, and seemed to save the day. But that particular pix-six wouldn’t have worked even if Johnson had gotten into the end zone, as the play would have been nullified thanks to sideline interference…from a TCU staffer tripping over the down marker?

1st overtime, we get the 9th INT of the game.

That penalty led to TCU having to start their own possession at the 40 instead of the 25. And as per both Bruce Feldman of The Athletic and William Wilkerson of The Dallas Morning News, that staffer was TCU associate director for athletics/sports information director Mark Cohen, a long-time SID (he received a CoSIDA 25-Year Service Award in 2014). It’s not every day you see an SID inadvertently committing a potentially-crucial penalty. (Oh, hey, and this came on the same play where another lineman But TCU overcame that field position with a couple of runs (and amazingly, a four-yard Muehlstein pass that wasn’t intercepted), and their other kicker, Song, ended the game with a 27-yard field goal:

And Song finally wins it for TCU

A nine interception snail race to the finish line between TCU and Cal finishes 10-7 on this field goal in overtime #CheezItBowl 🧀🧀🧀 pic.twitter.com/moBJZyOQG1

And this led to many Cheez-Its and much rejoicing:

This was a long way from the best-played bowl game this year, but man, it’s going to be one of the most memorable.