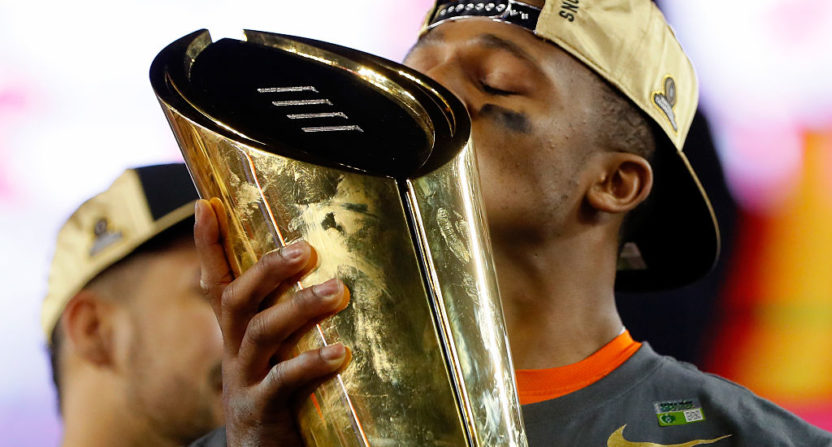 We’ve had three years of the College Football Playoff and its method of picking participants via selection committee. That means three years of learning the committee’s trends, talking points, and tendencies.

Of course, each year’s selection committee is slightly different, so it’s truly impossible to know what the committee as a whole thinks. Also, the committee is made up of people, and people can change their minds. It is entirely possible that what was most important to individual committee members one year is no longer as important the following year. After all that, though, there is still value in trying to learn from the committee’s past decisions.

When I write this article every week during the season, I like to focus on the entirety of the committee’s rankings. Yes, at the end of the season the top four are the only ones that really matter, with the top 10 also relevant due to New Year’s Six bowl selections. But I like to look at the rankings in their entirety. After all, even the bottom of the rankings teach us about the committee’s thought process, and we can still spot trends or inconsistencies when looking at them. Additionally, the committee often uses “wins over ranked teams” as an important metric, so the whole rankings matter.

However, for the purposes of this preseason piece, I am only interested in the potential effects on the Playoff. Three years means that 12 teams have been selected for the Playoff. What do these teams have in common? Are there notable differences from one year to another? Should we view each selection as a statement? Or maybe each year had its own circumstances that make it impossible to derive likelihoods about other years from it?

First of all, one important stat really stands out, even though it probably shouldn’t. All of the 12 teams selected only lost a maximum of one game. This could be by chance, but it doesn’t seem so.

In 2014 and 2015, there really was no two-loss option. Maybe Stanford in 2015 had a claim due to its superior strength of schedule, but the committee slammed the door on that possibility by putting one-loss Iowa ahead of the Cardinal. In 2016, two-loss Penn State had better wins than one-loss Washington and a better strength of schedule. Washington still got in. Again, it’s possible that Penn State’s lopsided loss to Michigan carried more weight than Washington’s bad SOS (both teams did have three wins over committee-ranked teams), but the one-loss point still stands out.

It’s not that two losses can’t get in; it’s that one-loss teams have an extreme advantage unless there are major discrepancies in resume. We have seen exactly one one-loss Power 5 team behind a two-loss team in the final rankings: Ohio State in 2015 was behind Stanford, and the Buckeyes had only one ranked win that year.

All 12 Playoff teams also share one other stat. Every single one of those teams defeated three or more committee-ranked teams. This is a stat that cannot last — eventually a team will run the table in impressive fashion but only face two ranked teams. It is still noteworthy and something to keep a close eye on.

What the committee doesn’t punish

There are two final trends that have become clearly noticeable over these past three years, though they don’t only affect the top four. The committee punishes teams for losses, and punishes more for bad losses. However, there are two types of losses the committee doesn’t punish. A team that loses a close game against a good team will not drop far, if at all.

I’ve noted before that this tendency can lock the committee into unfortunate situations, but the trend is clear. Lose to a better team and be impressive in doing it, and you won’t fall.

The second clear case is conference championship games. We have seen 14 such games that really affected the CFP rankings (three each from the ACC, Big Ten, Pac 12, and SEC, and two from the AAC).

The most a P5 team has fallen for losing in such a game is five spots — and that was when Wisconsin lost 59-0 to Ohio State. USC also dropped five spots (in 2015) when the Trojans picked up their fifth loss of the season in their CCG. Arizona dropped three spots for getting blown out in 2014. Navy dropped six spots for losing to Temple last year (by 24 points), but the Midshipmen remained in the rankings nonetheless. Last year, Florida lost to Alabama by 38 points and only fell two spots.

The message is clear. The committee won’t punish teams for earning an extra game. Maybe a blowout loss will cause a slight slide, but it won’t be major and it won’t knock a team out of the rankings.

What does the future hold

It really is impossible to know before the season what the committee will do. As mentioned above, the committee changes some members from year to year. People change their ways of looking at things. Or, sometimes, the course of the season dictates viewing some things differently.

Some trends are common and important enough to be precedent-setting, at least until the committee breaks them. Keep an eye out for these four things, though. At the top, it’s about number of losses and wins over ranked teams until proven otherwise. And everywhere else in the rankings, close losses to good teams or in CCGs won’t hurt.

The 2017 season is the final year that the committee will have members from the original team (five of them, to be precise), so presumably much of the weight in the room will come from those members. Next year, though, no one will remain from the Jeff Long era of the committee. We might see some brand new trends from the committee starting in 2018. Let’s worry about that next August.