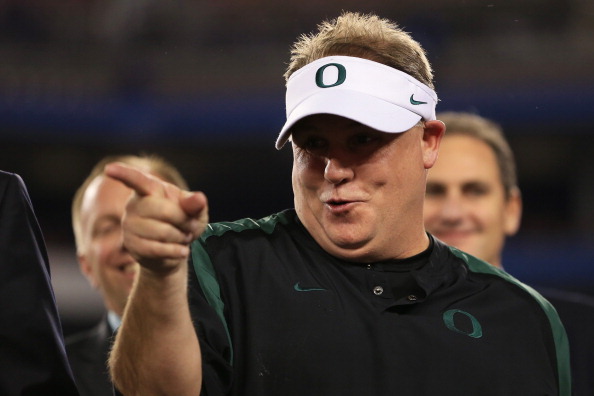 OK, so this past weekend of college football was not exactly the most entertaining. Just about every team in the top 10 won their game comfortably, and all of them won to make sure there could be minimal changes to our playoff and bowl outlook this week.

But just because it was cupcake city for a couple of conferences doesn’t mean this weekend was without some intrigue. It just so happened that the most interesting topics of conversation would take place off the field.

After losing to crosstown rival USC, UCLA decided the time was now to suck it up and embrace the buyout fee to cut ties with Jim Mora. On Sunday, UCLA announced it had relieved Mora of his coaching duties with one game to play, and the national search for a new head coach was officially underway. While the Chip Kelly rumors were flying hot and heavy throughout the SEC over the past few days, UCLA is the job Kelly should embrace.

UCLA would be a far better option for Kelly if and when he decides to return to coaching. Kelly’s coaching style is far more likely to take off with some success on the west coast compared to what he would be facing in the SEC. And given his past coaching experiences, the more laid-back west coast style would seem to be more comfortable for him than the grind of the SEC. The Pac-12 would clearly be the best fit for Kelly, and it’s not even close.

Kelly made a name for himself by elevating Oregon from a good program to one of the top in the country. The uniforms received plenty of attention under Kelly, but it was the dynamic offense that was the real reason for Oregon’s success. Oregon was never a monster recruiting force at the height of its success, but brought in some terrific players over Kelly’s career, including Marcus Mariota. At UCLA, the recruiting pool would be deeper for the Bruins, and a quick turnaround could easily be attainable. This also comes at a critical point in time for UCLA.

Mora was actually a decent hire at the time for the Bruins, and things got off to a decent start. He invigorated the recruiting efforts right out of the gates, and soon enough UCLA was being seen as a legitimate Pac-12 contender. But a failure to deliver on that Pac-12 championship hope at a time when USC was going through the Lane Kiffin and Steve Sarkisian run on the sidelines amid NCAA sanctions did not serve Mora well in the end.

At UCLA, Mora had some good talent to work with when the window was wide open for them, such as NFL quarterbacks Brett Hundley and Josh Rosen and one of the most dynamic defensive players in recent years with Myles Jack. Yet Mora failed to capitalize. Kelly would be more likely to deliver, just as he did at Oregon.

The timing of the UCLA coaching change suggests they are all in on luring Kelly back to the west coast. For the second straight season, UCLA is struggling to reach the postseason (the Bruins missed a bowl game last year and must win this week to become bowl-eligible). During that span, cross-town rival USC has won the Rose Bowl and are now heading to the Pac-12 championship game.

UCLA officials could have waited another week to move on from Mora, or could have waited a day to not fire their coach on his birthday. Instead, with Kelly rumors hinting at great interest from Florida, UCLA cut the cord with Mora immediately and opened the door to a possible hiring of Kelly. And Kelly seems to be interested, with some reports suggesting he sent Florida officials home empty-handed so he could talk with UCLA.

Kelly has options, and UCLA should definitely be an attractive one for him. And if UCLA manages to hire Kelly instead of Florida (or Tennessee!), watch those message boards in the SEC melt down pretty quickly as the rivalry between USC and UCLA gets a little more balance.

Few teams have experienced an in-season turnaround the way Missouri has this season. The Tigers looked pitiful early on this season. After a 72-43 victory over FCS opponent Missouri State, the Tigers were blown out by South Carolina (31-13), Purdue (35-3) and Auburn (51-14) at home. It was a rough start to the season for head coach Barry Odom, with Missouri largely being written off before the season even started.

Following the drubbing by Auburn, Odom delivered quite the passionate speech that seemed to be from a coach cracking under the pressure.

After that address to the media, Missouri lost two more games on the road against Kentucky and Georgia. At 1-5, it looked as though Missouri was staring down an incredibly dreadful season. All hope could have been lost at that point in the season. We’ve seen it before, and we’ll see it again.

But then something clicked. Missouri blew out Idaho to get back in the win column, and then went on the road and blew out UConn. Then a jump back into conference play came at the best possible time. The renewed offense dominated Florida and Tennessee in back-to-back weeks to keep the good vibes going. Suddenly, the season was turned around and the chance to play in a bowl game became a realistic possibility. Nobody saw that coming back in September, or even in October!

Missouri scored another dominating win in SEC East play against Vanderbilt this past weekend to put the Tigers at 6-5, making them eligible for a bowl game. And they still have one more game to play, on the road against Arkansas. A chance to clinch a winning season against the Razorbacks should probably lead to Odom receiving some coach of the year consideration.

Group of Five Update: We’re down to four contenders

I wondered if Temple might give UCF some trouble on Saturday. It was a noon kickoff in chilly Philly, and the Owls had been playing better the last few weeks. But UCF left no doubt in a blowout win, helped by a good handful of turnovers by Temple. As such, UCF remains undefeated and continues to be the team to beat in the Group of Five push for the New Year’s Six. And the American Athletic Conference remains in firm position to send their champion to the New Year’s Six this season.

UCF plays rival USF this week. The Bulls were the preseason favorite to grab the NY6 spot, and now is their chance to prove they are still capable of doing so. A win over UCF and a win over Memphis in the AAC championship game would figure to be enough to send the Bulls to the big bowl game, but the committee placed Boise State in the ranking last week, and that could be a potential curveball.

I believe USF winning games against UCF and Memphis would deserve a jump past the Broncos, but this committee’s logic can be difficult to figure out. Did the committee just give Boise State an out? If the Broncos win back-to-back games against Fresno State (once in the regular season finale this week and next week in the Mountain West Conference championship game), that would end the season with two losses for Boise State and the Broncos probably manage to move up a few spots in the committee’s rankings.

Will USF be able to catch them if that is the scenario? Again, I think they should, but I cannot say with any guarantee the committee would do that.

I have been ranking five teams in my Group of Five top five this season, but there are now just four legitimate contenders for the NY6 bowl spot as I see it, so I’m reducing the ranking to four teams this week. It’s still top-loaded with AAC contenders.

With not much going on in the top 10 this past weekend, I saw very little reason to adjust my playoff outlook this week. So with that being the case, I’ll get right to it. Here is how I would rank the top four teams as of today…

This is all setting up fairly well for a straight-forward playoff field. The ACC Championship Game still looks like an elimination game to me, and I believe this week’s Iron Bowl will serve as an elimination game as well. If Auburn tops Alabama, I think it might end up being more difficult for a one-loss Alabama to make the playoff in the end without the conference championship than many seem to think.

A one-loss Alabama faces the problem of being up against an undefeated or one-loss ACC champion, a potential one-loss Big 12 champion, a one-loss SEC champion or a two-loss SEC champion with a head-to-head victory in their favor (and this would not be the same as last year’s Ohio State-Penn State issue), and a Big Ten champion that will either be undefeated or will have two losses on its hands. For Alabama, their best shot with one loss would be to be compared against a two-loss Big Ten champion Ohio State.

Here’s how I’m projecting the playoff field as of now.