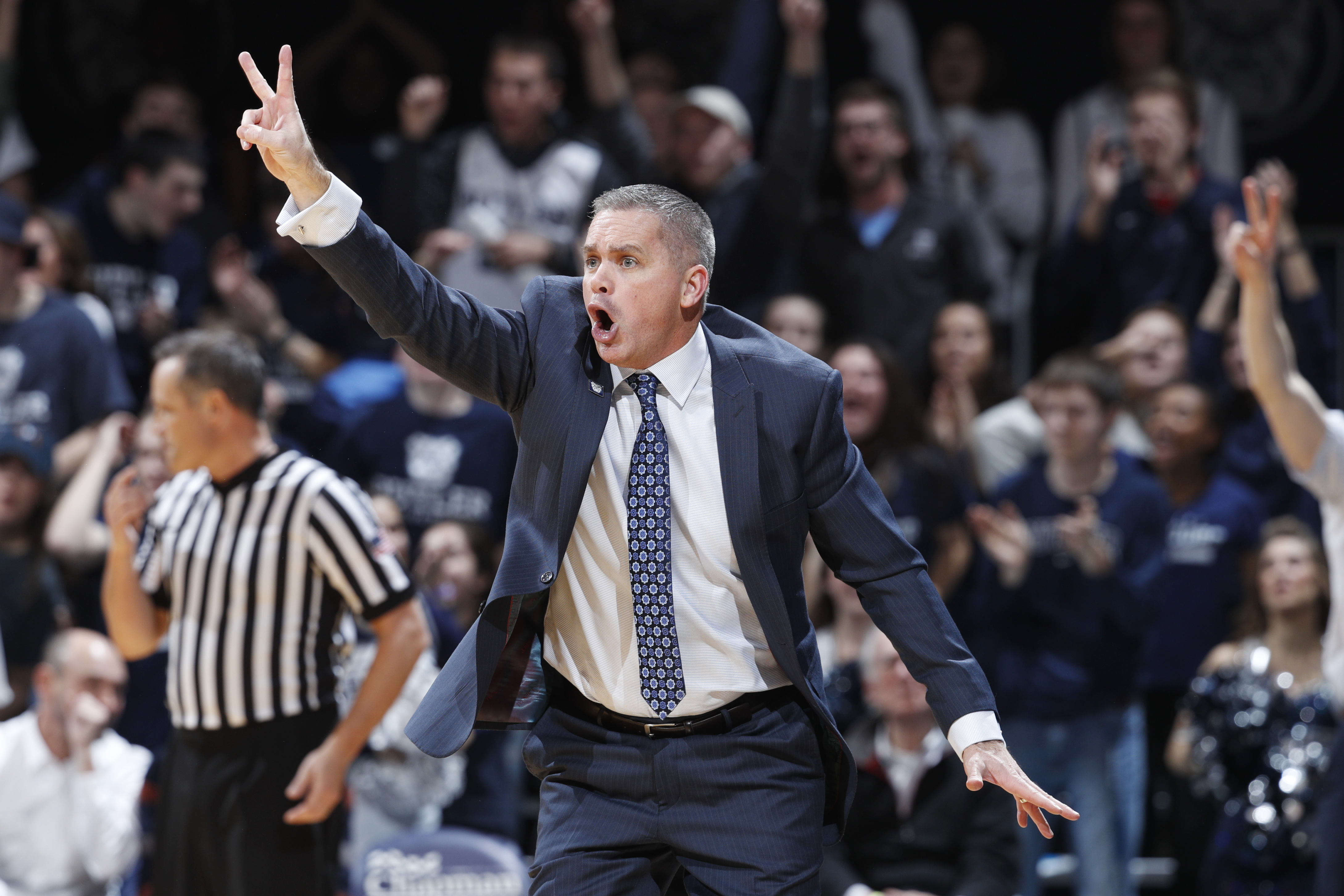 Hullababoo. Otherwise known as disorder or commotion. That oddly formed phrase has recently defined the college basketball scene, as seven top 25-ranked teams have lost since Saturday. However, one matchup failed to provide a similar level of madness, partially due to a blown call by the zebras on the sidelines.

Tied at 88 apiece with under six seconds left, Kansas guard Sviatoslav Mykhailiuk drove from the opponents’ three-point line to the Jayhawks’ arc. Suddenly, he picked up his dribble and proceeded to take four steps on the way to his game-winning layup. Incredibly, traveling wasn’t called, giving the No. 3-ranked team a literal walk-off victory versus the upset-minded Kansas State Wildcats. In fact, Kansas head coach Bill Self even admitted to the fact that the junior traveled on the play.

Fran Fraschilla's response to Kansas's winning basket: "Even in Europe that's a travel."https://t.co/tUEMvbttnv

Sadly, there’s no section for bending the rules in The Comeback’s College Basketball Stock Watch. Sorry, Jayhawks fans. Like usual, though, a team and a player on the uptick make the list, along with a duo on the downfall.

Plus, an unfamiliar talent aided the underdog’s odds down the stretch. Facing a one-point deficit with under three minutes left, guard Kethan Savage maneuvered inside the lane for a bucket to put Butler on top for good. Just over a minute later, he stepped in front of a pass intended for Wildcats guard Donte Divincenzo and converted an and-one lay-in at the other end. In total, the George Washington transfer tied for a team-high 13 points.

After averaging about 20 minutes per contest during the previous three matchups, the 6-foot-3, 205-pound Savage appears to have finally cracked head coach Chris Holtmann’s rotation. He’ll add to the Bulldogs’ impressive arsenal, which ranks No. 22 in the nation in offensive efficiency (1.13 points per game). Kelan Martin, who posted 12 points and six rebounds against Villanova, leads the attack with 17.7 points per contest. The Bulldogs will look to tack on a third consecutive win versus the struggling Georgetown Hoyas (8-7, 0-3) on Saturday.

Despite the Hawkeyes’ (9-7, 1-2 Big Ten) underachieving mark, their senior guard strung together an impressive 16-game stretch, especially over the past several days. Against Michigan (86-83 OT win) and Nebraska (93-90 2OT loss), Jok combined to average 29.5 points on 50 percent shooting. On the season, he’s amassing 22.9 points, along with 6.2 rebounds, per contest.

What makes him so potent is his knack for producing without much assistance. Besides Jok, Iowa only boasts one other double-figure scorer in freshman forward Tyler Cook (13.2 ppg). Moreover, the 6-foot-6, 205-pounder has notched 267 field goal attempts thus far, which places 134 ticks higher than any of his teammates. But he still holds a rock-solid shooting percentage (44.9).

Peter Jok is the purest definition of a "volume scorer". Leads all major conference players in shot%, and by quite a bit.

Given his scoring prowess, Jok sits No. 17 in the country in usage percentage (33.1). Head coach Fran McCaffery should continue to present him with a high amount of touches until someone else steps up. Hence, anticipate him carrying the load once again versus No. 20 Purdue next Thursday.

Following an 11-1 start to the campaign, the Cavaliers (11-3, 1-2 ACC) have suffered back-to-back losses, including an 88-76 loss to Pittsburgh (12-3, 1-1) on Wednesday. The most disturbing part of their setback was allowing the Panthers to shoot 53.7 percent from the field. Through 13 games, Virginia yielded a mere 36.7 shooting clip to its opponents.

Considering head coach Tony Bennett’s unit ranks No. 253 in scoring (68.8 points per contest), it can’t afford lapses via its highly-touted pack-line defense. Nevertheless, a hot three-point shooting bunch can cause numerous issues for the Cavaliers because of their focus on collapsing in the paint. Pittsburgh capitalized on that, drilling 13-0f-21 shots from behind the arc. Forward Jamel Artis generated plenty of the havoc with 24 points, as well as hitting six threes.

Furthermore, Virginia’s defensive efficiency has tumbled in its previous three affairs. While giving up just .83 points per possession overall (No. 3 in the nation), the group let up an astounding 1.04 points per possession over that stretch. Aside from guard London Perrantes (10.4 ppg), the Cavaliers don’t possess another player scoring in double figures. Therefore, the defense must revert back to its old ways.

Although the senior guard is collecting a career-high 14.3 points per game, he floundered in Cal’s (10-5, 1-2 Pac-12) 81-71 loss at No. 4/5 UCLA (15-1, 2-1), scoring only three points on 1-of-7 shooting. Fouling out just beyond the seven-minute mark of the second half didn’t help, either, as his squad was somehow able to cut the deficit to five points with less than a minute left despite trailing by 20 points after the first 20 minutes.

Since the Bears won’t see the Bruins for the remainder of the regular season, the matchup represented their best opportunity to gain appeal for a potential bid into the NCAA Tournament. Selection Sunday is more than two months away, yet a critical conference win could’ve easily done wonders for the program. Bird’s no-show stat line obviously didn’t assist their chances, though.

Cal is now 22-6 in games over the past two seasons when Jabari Bird scores in double-figures. Had 16 in Sunday nights win over ASU.

Even with two other legitimate scorers in sophomore forward Ivan Rabb (15.3 ppg) and freshman guard Charlie Moore (15.1), Cal’s offensive efficiency slots in at No. 187 in the country (.99 points per possession). In order to upend No. 25 USC on Sunday, it’ll need the the 6-foot-6, 203-pounder to rediscover his shooting touch.