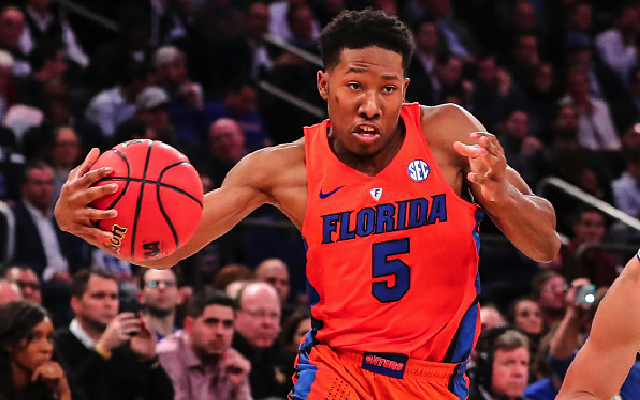 Following another enticing week of college basketball, who could have guessed that the handshake line would spark some intrigue?

In the waning seconds of Texas Tech’s thrilling 66-65 victory against No. 25 Kansas State, Wildcats head coach Bruce Weber was visibly upset due to a no-call on guard Barry Brown’s attempted layup. Subsequently, the referees handed him a technical foul. Once the final buzzer sounded, he continued to exhibit his indignation by zipping past his counterpart Chris Beard.

Apparently, though, Weber is well-known for these antics, pulling the same card on Kentucky head coach John Calapari after a loss in the 2014 NCAA Tournament.

Sadly, The Comeback’s College Basketball Stock Watch doesn’t include a section for wimps. Instead, a team and a player gain acclaim for their performances over the past several days, while another duo takes a step back. Don’t boil over like Weber if your favorites fail to make the cut, though.

Despite competing in a weak Southeastern Conference (SEC), Florida (13-3, 4-0) deserves praise for its hot start, considering the program missed the Big Dance in each of the past two seasons. Within the previous week, the Gators strung together 13-point wins over Tennessee and Alabama. Against the Volunteers, guard KeVaughn Allen went on to generate a season-high 23 points.

Florida's KeVaughn Allen is 13-20 from three-point range in his first three SEC games. Shooting 42.7% from deep on season. 31.% last year.

Florida doesn’t own a marquee victory yet, but its point differential stands out. Head coach Mike White’s bunch ranks No. 30 in the nation in scoring differential with a plus-12.4 points per contest. Additionally, White loaded the non-conference slate with three Top 10-ranked schools (No. 5 Gonzaga, No. 7 Duke and No. 9 Florida State) and lost by just single digits in those affairs. Hence, the unit possesses the weapons to give SEC darling Kentucky some issues in the near future.

Alongside Allen (team-high 14.2 ppg), guard Canyon Barry (11.9 ppg) and forward Devin Robinson (11.8 ppg) can also score in doses. Moreover, the Gators are just as lethal on the defensive end, placing No. 12 in the country in opponents’ turnovers per game (16.6). Over the last two matchups, they’ve totaled 35 of them. But in order to keep rising in the polls, the group must fend off South Carolina (13-3, 3-0) next Wednesday evening.

Although Alonzo Trier’s absence hurts Arizona’s hopes of contending for a Pac-12 title, their seven-foot, 230-pound forward has proven he’s built to carry the load. Markkanen manufactures 16.4 points and 7.4 rebounds per game, yet he exploded in the scoring department over in his past two games against Colorado and Arizona State, combining to average 26 points in that span

Given his stature, the most impressive part about Markkanen’s game revolves around his shooting touch. In total, he has accumulated a 46.5 percent clip from behind the arc, along with taking almost five per contest. On top of that, his effective field goal percentage, which puts extra value into three-pointers, stands at 61.6 percent.

I liked the way Arizona used Lauri Markkanen as more than a pick/pop big vs Cal. Prefers to drive left, used him as a PnR/DHO ball handler. pic.twitter.com/9oTilGSgLX

His confidence is evidently growing, too. In the Wildcats’ 16-point win over the Sun Devils, the Finland native hit a season-high 12 field goals, leading to his season-high 30 points.

Plus, Markkanen displays sound ball-handling skills as well, making it even tougher for opponents to slow him down. In the latest NBA mock draft on DraftExpress, he’s projected to go eighth overall, but could still move up one or two more spots if he persists at this pace.

Entering the season as the No. 1-ranked team and national title favorites, Duke (14-3, 2-2) hasn’t lived up to the billing. On Wednesday, Florida State pounded the Blue Devils in an 88-72 win at Tallahassee. Duke has never been known as a dominant defensive team, yet the Seminoles exposed their youngsters on that end of the floor, shooting 53 percent from the field.

Missing Amile Jefferson, who sat out the matchup with a foot bruise, evidently hurt Duke’s chances. Nevertheless, other issues cloud its recent stretch.

For one, guard Grayson Allen notched a poor performance versus FSU with just seven points. Even though guard Luke Kennard (20.4 ppg) and forward Jayson Tatum (17.4) have combined to provide steady production with Harry Giles easing his way back from a knee injury, Allen needs to exhibit his knack for scoring as the Blue Devils dive deeper into ACC play. Currently, he holds a mere 39.8 percent clip from the field after a shooting 46.6 percent as a sophomore.

Furthermore, head coach Mike Kryzewski is expected to miss another three weeks on the sidelines after undergoing back surgery. Assistant coach Jeff Capel represents a viable option for the time being, but Duke can’t afford to continue to suffer another loss via No. 14/15 Louisville on Saturday.

While Mason doesn’t deserve sole blame for the Golden Gophers’ 65-47 loss to Michigan State earlier in the week, the 6-foot-2, 190-pounder (14.3 ppg) certainly contributed to their struggles. Overall, he shot 6-of-15 from the field, as No. 24 Minnesota (15-3, 3-2 Big Ten) went on to score only .71 points per possession, the lowest single-game offensive efficiency under head coach Richard Pitino.

In his last three games, Mason has combined to collect a 28.5 percent clip from the field. In spite of the fact that the Georgia native has never showcased an elite shooting prowess, his latest woes have been hidden within Minnesota’s unexpected success. However, the Spartans don’t amount to a dominant defensive team by any means, placing No. 57 among Division I schools in scoring defense (66.7). Thus, the guard’s latest underwhelming performance doesn’t bode well for the unit’s aspirations to sustain its success.

If his shot appears rusty again tomorrow versus against Penn State, the Golden Gophers’ could extend their slide. With a packed Big Ten set to deliver roughly eight teams into the NCAA Tournament, Minnesota needs Mason to start producing at a higher rate again.