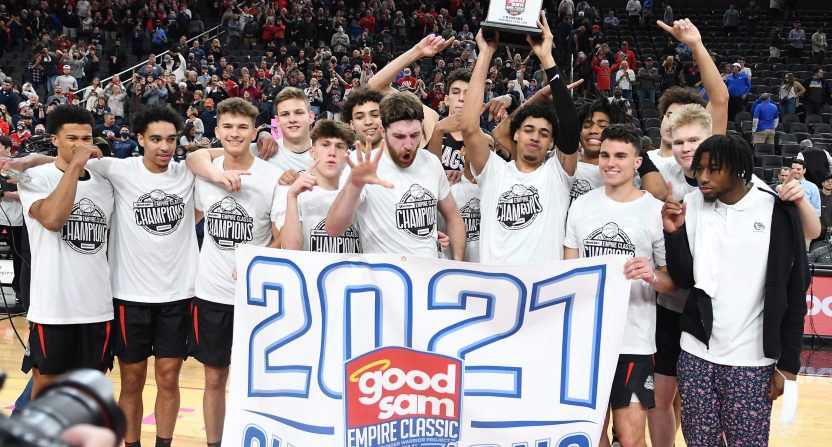 Tuesday night’s Gonzaga-UCLA game was the most appealing matchup so far in the 2021-22 college basketball season, featuring the No. 1 and 2 teams in the country (it also featured an emotional return to the ESPN booth for broadcasting legend Dick Vitale amid his battle with cancer).

Well, No. 1 Gonzaga steamrolled No. 2 UCLA 83-63 at the Good Sam Empire Classic in Las Vegas, in a game that was essentially over five minutes in.

Holmgren, a string-bean 7’0″ freshman, is enormously talented — and with tons of upside, especially as he fills out — and in the conversation for the No. 1 overall pick in the 2022 NBA Draft. You can see why here:

Gonzaga, UCLA, Purdue, and Kansas have all been perceived as possible No. 1 teams in the country. While we may not be able to conclusively say anything in comparison to Purdue or Kansas just yet, Gonzaga at least looked on another level than an absolutely loaded UCLA team that went to the Final Four last season. And this is after Gonzaga lost star point guard Jalen Suggs to the NBA.

It’s just one game, but it was an eye-opening performance by the Bulldogs.

Here’s a sampling of how the college basketball world reacted to the Zags’ win:

And wiped the floor with both of them.

I guess Gonzaga deserves to be #1

Gonzaga left no doubt about who the best team in the country is. Bulldogs dominate UCLA from tip to finish in Las Vegas. And Chet Holmgren? It's not shots blocked — it's shots altered.

You know when you have a great team?

When you beat the number two team in the country and no talks about the Preseason National Player of the Year (Drew Timme) because your PG (Andrew Nembhard) and freshman star (Chet Holmgren) are that exceptional.

Gonzaga again has the goods.

Chet Holmgren is an ELITE shot-blocker. Just wait til this kid puts on some weight.

When he puts on some weight… look out pic.twitter.com/DcLuu7RE0t

I don't think UCLA has gotten a single good shot this game. Not one. They're offense is built on playing iso ball and finding mismatches, but:
▪️ Gonzaga's perimeter players are *really* locking up
▪️ They now they can get aggressive, overplay because
▪️ UCLA is terrified of Chet

How about it’s because they’re playing the No. 1 team in the country?

If you’re still denying how good Gonzaga is, you’re blind.

Guess Gonzaga is tired of the "they're probably not as good as last year" talk.

People that do this for a living have been talking about Chet Holmgren being the #1 pick in 2022 for a few years. Twitter watches him for 5 mins and says “idk, he’s skinny.”

This is just an incredible sequence from Chet Holmgren. pic.twitter.com/O9SjtbSDV1

Since the start of the 2009-10 season, Mick Cronin-led teams have given up 70 percent shooting inside the arc just two times:

The next Top 25 should consist of only Gonzaga