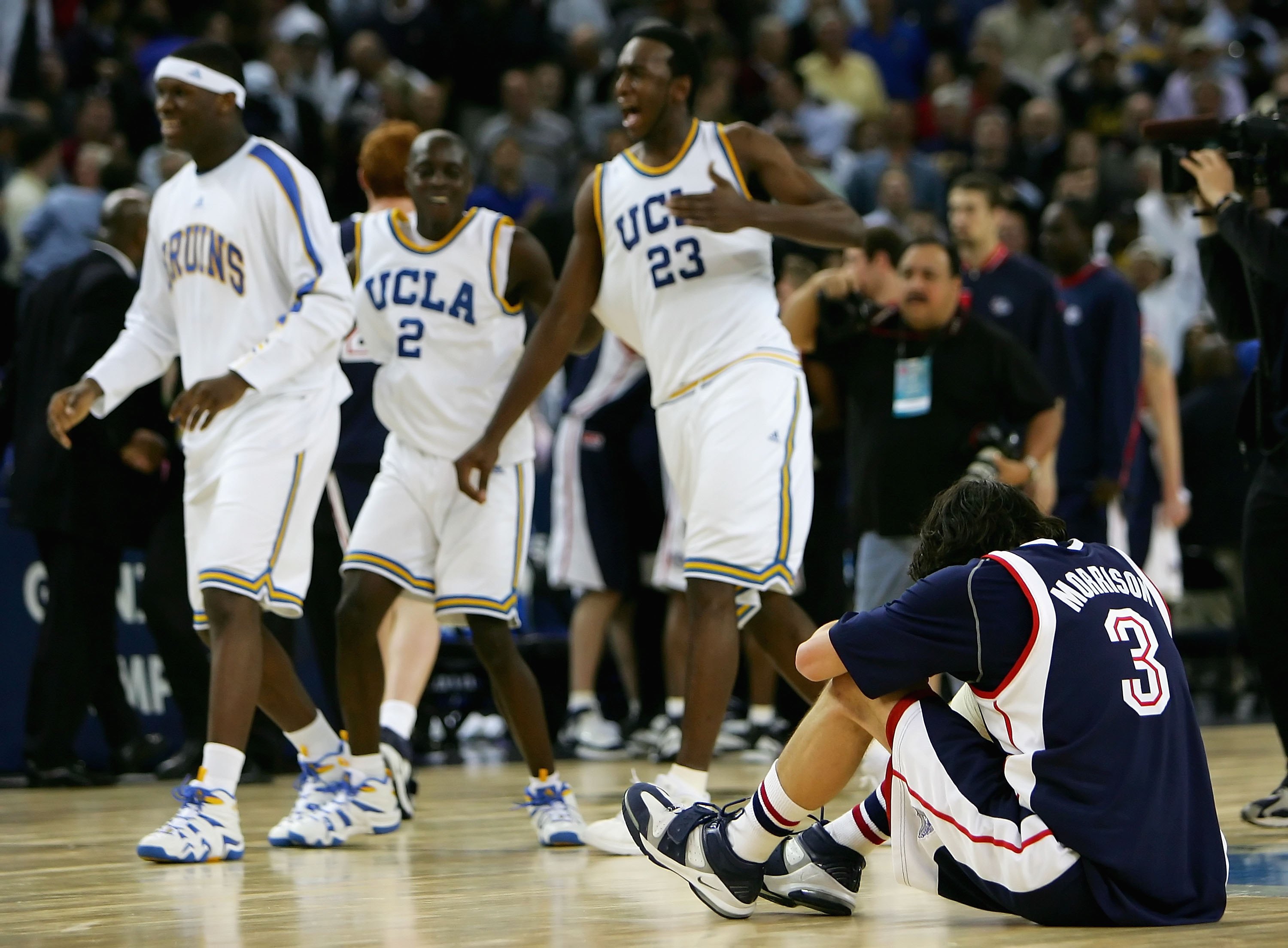 With the NBA and NHL playoffs in full swing, we’ve seen some remarkable victories and heartbreaking failures. And because it’s Game of Thrones season, it only seems fitting that this week at The Comeback we take a long look at the latter. Here are the franchises and schools with the most torturous postseason histories in all of sports.

Earlier, we found out who the five most tortured college football postseason teams were, but the misery doesn’t end there. Now it’s time to focus on the pain and torture that comes with rooting for one of these college basketball squads. Every year, they have such high hopes and sometimes they even put together a successful regular season. But once the NCAA Tournament rolls around… it all goes to hell.

You can probably think of plenty of schools that fit the bill here (including yours), but here are the five NCAA basketball teams that have suffered more than the rest in postseason history.

To be fair, the Cyclones have been to the Final Four before. In 1944. They wouldn’t make the NCAA Tournament again until 1985. For the next two decades, they found a mixed bag of success, making three Sweet Sixteens (1986, 1997, 2000) and one Elite Eight (2000), but getting no further.  In recent years, they’ve really upped their consistency, making the NCAA Tournament every season since 2012 and making it to two more Sweet Sixteens. They’ve even become more of a mainstay amongst lower seeds, earning No. 3 or No. 4 seeds the past three years. But still no more Final Fours.

The pain for ISU comes from actually having a sneaky-good recent history of basketball success and a roster of solid coaches (Johnny Orr, Tim Floyd, Larry Eustachy, Fred Hoiberg). On paper, this is a program that has mostly held its own since 1996 and watched as so many other programs have cut down nets while they go home disappointed every March. They’re stuck in the in-between zone of being “pretty good, but not good enough.” That’s almost worse than being bad in a way.

Adding insult to injury, some of their very best seasons have ended with soul-crushing first-round upsets. There was No. 15 Hampton’s shocking win over No. 2 Iowa State in 2001, not to be outdone by ISU’s 2015 loss to 14-seed UAB.

To be fair, Pitt has national titles. Also to be fair, no one remembers them. The Panthers were named champs in 1928 and 1930 by the Helms Athletic Foundation and Premo-Porretta Power Poll (which sounds awesome). But it’s a bit of false gold, in a way. Because it was pre-NCAA Tournament as we know it, the rest of us tend not to count it. Sorry, Pitt.

They did make a Final Four in 1941, so they’ve got that on the books as well. But since then, it’s been a history of good regular seasons, high Final Four hopes and miserable post-season losses.

Again, this is a case of a basketball team that has been pretty good, but not good enough — at least not when it matters. Starting with Ben Howland and then continuing for most of Jamie Dixon’s tenure, the Panthers made the NCAA Tournament 13 times. In all of those times, they made it as far as the Sweet Sixteen five times and only as far as the Elite Eight once (2009). Making matters worse, Pitt was often a very low seed in most of these seasons (Two 1-seeds, one 2-seeds, and four 3-seeds).

One miserable NCAA Tourney experience no Pitt fan can forget is the ending of the third-round 2011 game between 1-seed Pitt and 8-seed Butler. It’s bad enough when a 1-seed loses before the Sweet Sixteen. Losing like this is a whole other thing.

Despite Dixon’s success at Pittsburgh, his successor Kevin Stallings has more room to work with than you might think. Even if his regular seasons don’t go as well as Dixon, if he can somehow push Pittsburgh into the Final Four, he might even be remembered more fondly.

The Cougars are here because of sheer numbers. No school has appeared in more NCAA Tournaments without ever getting to the Final Four. Their 29 Final Four-less attempts is three more than the next school (Xavier), and the pain is really driven home by the fact that they haven’t even been within striking distance of a Final Four for three decades. The last time they were in the Elite Eight? 1981. They’ve only gone to one Sweet Sixteen since then (2011), which you might remember as the Year of Jimmer Fredette. Really driving home the dagger, they ended up losing that game to Florida in overtime.

In the three NCAA Tournaments they’ve made since then, they haven’t won a game. Rooting for BYU in the post-season is an exercise in futility.

Virginia is pretty high on this list for a school with two Final Fours. Still, Ralph Sampson and the early 80s seem so long ago. The Cavaliers have certainly been successful in recent years and perhaps that’s what makes the last 30 years so painful. Following their fourth Elite Eight in 1995, the program fell off for a decade and spent much of their existence looking up at Duke, North Carolina, and whichever other ACC team happened to be really good that year. It never seemed to be them, however. That’s a shame considering the strong fanbase, the great arena and the history. Virginia just seemed like they were supposed to be good… but weren’t.

That all changed with Tony Bennett. Since 2009, he’s turned the Cavs into one of the best programs in the ACC and the nation. A Sweet Sixteen in 2014 showed the program was arriving. 2016 was supposed to be their coming out party as an elite program. A 1-seed in their region, they watched 2-seed Michigan State lose in the first round and their road to a Final Four was clear. They followed that road to the Elite Eight, where a streaking Syracuse squad was all that stood between them and destiny. For 32 minutes, they dominated. They had led at halftime and were 68-0 under Bennett when leading by 10 or more points at the half. They led by by 15 points with 9:32 to play. Then Syracuse started to press and, for reasons still not clear, Virginia collapsed. The Orange went on to the Final Four and Virginia’s fans went home dejected and confused. Story of their lives.

Historically-speaking, there are plenty of schools that have played in more NCAA Tournaments without getting to a Final Four. What makes being a Gonzaga basketball fan so painfully frustrating in the postseason is just how much late-year misery they’ve packed into the last 20 years. A 30-year-old Gonzaga fan must look like they’re 50 at this point.

It’s a shame because pound-for-pound, they’ve been one of college basketball’s best programs this century. In 1999, Dan Monson’s 10-seed Zags made a magical run to the Elite Eight and the door seemed to be opening to many Final Fours and championship possibilities to come. Sure enough, Gonzaga has made the tournament every season since and reached the Sweet Sixteen six times (2000, 2001, 2006, 2009, 2015, 2016), but only made it as far as the Elite Eight one more time (2015).

It’s not just that they haven’t made good on that promise, but that they’ve squandered so many low seedings and great opportunities. As a 1-seed in 2013, they lost to No. 9 Wichita State in the Round of 32. They didn’t make it out of the first weekend as a 2-seed or 3-seed three times. The 2005 Sweet Sixteen loss to UCLA stands out most for the stunning way that the Bruins erased a double-digit deficit to win, but also for the image of Adam Morrison crying that came to define the program.

This past season, the Zags returned to their Cinderella roots as an 11-seed and upset 6-seed Seton Hall and 3-seed Utah, en route to a Sweet Sixteen showdown with 10-seed Syracuse. It seemed like perhaps this was their chance to brush aside the hype and win on their own terms. Most people thought they were the better team anyway. They certainly had their chances and led with 21 seconds left, but some questionable calls and surprise Syracuse defense eventually did them in.

Perhaps the Zags and their fans are destined to do this forever. It certainly feels that way.