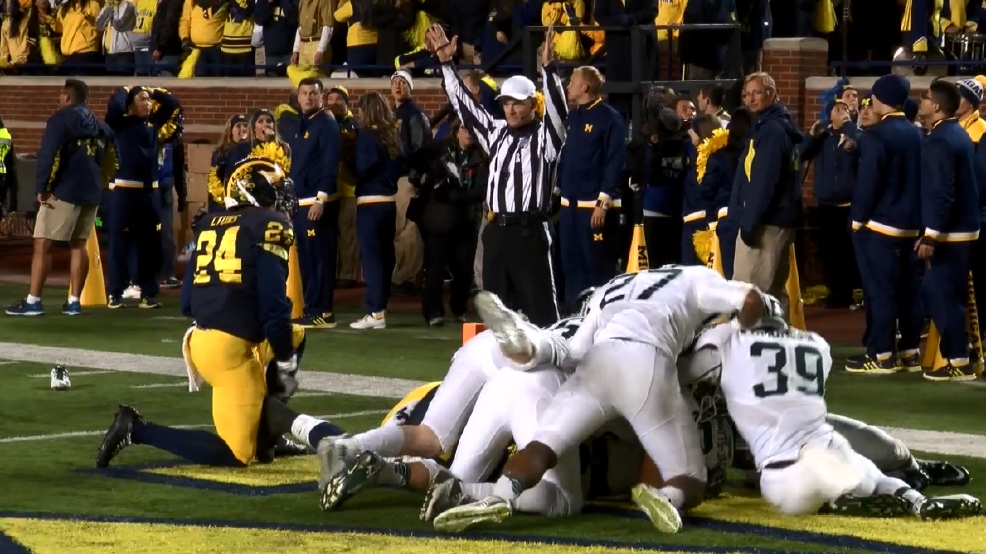 As far as certainties go in life, college football is right up there. Unlike, say, death or taxes, the sport really never disappoints.

While this season never devolved into the absurd 2007-style chaos many predicted (read: hoped for), 2015 was not lacking for insane finishes, gut-wrenching results, and simply astonishing plays. As you’ll hear in the process of soundtracking one of the plays, indeed:

What A Time To Be Alive.

With the regular season officially on ice after Navy’s thrilling win over Army on Saturday, we figured a sampling of the plays that defined college football — and separated the playoff and conference contenders — was in order.

Oklahoma at Tennessee: Sooners Survive On 4th Down (Sept. 12)

There were few hints during September that Oklahoma would emerge as the relative juggernaut it became down the stretch. However, the Sooners did at least have the requisite resolve. Baker Mayfield’s season-saving fourth-and-goal touchdown in overtime anchored a 17-point comeback in Knoxville and kept all the Sooners’ goals on the table. For the Vols, it was the first of three brutal defeats in which they led by at least 13 points, including a loss to Florida that kept UT out of the SEC Championship Game.

Call this, “Clemsoning: The Reckoning.”
Dabo Swinney infamously railed against the term the following week, and while this game wouldn’t have fit the moniker anyway, his team was on the verge of blowing an 18-point advantage when Torii Hunter, Jr. hauled in a touchdown pass from DeShone Kizer with :07 left. The rain-soaked affair went the Tigers’ way thanks to the failed two-point conversion moments later — only necessary since Brian Kelly had ordered a two-pointer after a touchdown with 14-plus minutes remaining. The win gave Clemson a trump card on its non-conference resume, en route to a No. 1 CFP ranking. The result also eliminated injury-riddled Notre Dame’s margin for error.

Whatever nickname you want to bestow upon this play (Fail to the Victors, The Gift Six, etc), there’s no doubt it belongs in the pantheon.
This was the game the Harbaugh Era had rapidly built toward, and Michigan was in control in the waning moments despite being thoroughly outgained while only acquiring a single turnover and losing the penalty battle. Michigan was nine seconds from being a playoff frontrunner! Oh, how fast it all came crashing down — seriously, the reaction shots here are perpetually meme-able. Beyond the moment’s legendary status, the play kept Sparty at the forefront of the playoff picture, and the Spartans capitalized with some clutch last-minute wins down the stretch.

Florida State at Georgia Tech: What A Time To Be Alive (Oct. 25)

We knew Florida State had to lose a regular-season game at some point. Hell, it had been a cool 1,113 days since FSU lost to an ACC foe when the Noles traveled to Atlanta. You definitely wouldn’t write it like this.
The Seminoles struggled all night with a desperate Tech team playing for its bowl life after being a preseason darling. Yet FSU still had stud kicker Roberto Aguayo up with the game on his foot, albeit from a lengthy 56 yards. What happened next was an instant classic, thanks in no small part to an epic call that was the best free promotion Drake and Future could have asked for. What a time it was.

Nothing can top a walk-off punt recovery scoop n’ score or a blocked field goal to the house as time expires, right? Leave it to Arkansas and Ole Miss (they of 7-OT fame) to give it a shot.
Arkansas was dead and buried, facing a last-gasp fourth and 25, on the road, in overtime. The Hogs were simply ready to get weird. In a funhouse mirror of a play, Alex Collins picked up a haphazard lateral and scampered to a first down, right into SEC lore. The Razorbacks won moments later on a second-chance 2-point conversion, keeping Ole Miss out of the SEC title game and paving Alabama’s path back to the CFP.

Stanford achieved mightily this season, returning to the Rose Bowl and winning the Pac-12 for the third time in four years. Still, there’ll always be a lingering what-if for the Cardinal, be it the opening-weekend ambush at Northwestern or this last-second home loss to their perennial division rivals.

It all came down to a 2-point conversion after a masterful 50-yard scoring drive in the final minute, putting the Trees in position to survive a 12-point fourth-quarter deficit. However, 15th-year senior (OK, we kid) Kevin Hogan’s pass was knocked away, giving the CFP committee a far simpler Selection Sunday and propelling Oregon’s second-half surge toward a still-attainable 10-win season.

It was unlikely Houston could crash the playoff party, at least not this year, without a major non-conference pelt. The Cougs’ defeat at Connecticut still had ripple effects that would be felt in many subtle ways.

Quarterback Greg Ward, Jr. missed much of the game with an ankle issue, only to be thrust back into action due to backup Kyle Postma’s in-game injury. Ward, an explosive playmaker and difference-maker as he especially proved in subsequent weeks, tossed a pick that ended UH’s unbeaten bid. The loss quelled any outcry about the Group of Five’s playoff odds, and may have been a net positive for UH. Prized coach Tom Herman hasn’t hit his ceiling yet, perhaps enticing him to prove a bit more in H-Town before making the leap to an elite gig (See: Texas, LSU).

If there’s a theme to this compilation, it’s 2-point conversions and the high degree of leverage they exerted on college football’s elite in 2015. Given TCU’s win versus Baylor six days later, none may have loomed larger than Gary Patterson’s bold decision to go for the win in Norman.
With one-time Heisman candidates Trevone Boykin and Josh Doctson out, the Horned Frogs were undermanned and had managed to rally from 17 points down. If not for Steven Parker’s leaping deflection, it could easily be TCU preparing for an Orange Bowl matchup with Clemson.

I’ll let Michael Geiger tell you everything you need to know about the kick that ultimately propelled Michigan State to the Big Ten Championship Game and an eventual playoff berth.

Geiger postgame on Spartan Radio: “It was the biggest kick of my life, and I fucking nailed it.” — Tony Garcia (@RealTonyGarcia) November 22, 2015

This was college football at its most vital.

To cap a year in which the ACC had already apologized for an all-timer of a botched ending, the league put the cherry on top with a call that actually had national championship ramifications. Sure, UNC was still trailing by eight points with 73 seconds left, but the Tar Heels earned that onside kick entirely above board — a relatively rare occurrence, I might add. Alas, the referees ruled offsides on Carolina, an obvious farce of a call which robbed the Tar Heels of a proper chance to send the game to overtime. It was a mistake that ultimately benefited a team most wanted to see in the playoff. What an entirely apropos way to ensure it.

This list isn’t comprehensive, as the sport is shaped every year by thousands of small bounces and universal randomness.

It’s just a blend of the weird and wacky plays that make college football eminently compelling and maddening, a stew of humanity and humility that replays on loop each fall, only bothering to change the actors and some minor details.