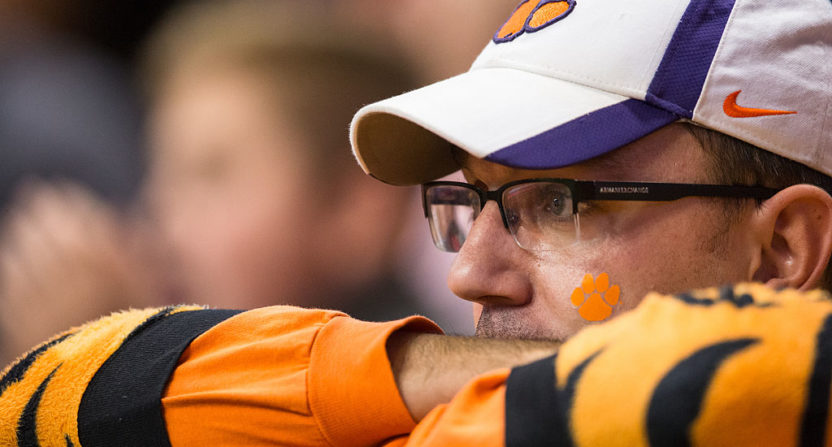 The 2017 college football season has just about arrived. Hopes will be dashed throughout the country. Seasons will sour across the nation.

But August seems like the right time for a clear assessment of how fans feel about their football programs. Here is how the ACC fan bases rank from the most depressed and angst-ridden for the coming season to the least.

14. Virginia:
The “when will they finally fire Mike London” era ended after 2015. Bronco Mendenhall came in from BYU. UVA then finished 2-10. It was their worst season in decades. They lost to Richmond, by more than two touchdowns, and Bob Diaco’s UConn. They were terrible in almost every aspect of playing football. It’s no fun being the glaring counterpoint when people argue that the ACC is college football’s best conference. UVA should get better under Mendenhall, but they have a long, long way to go.

13. Boston College:
Half-full: Steve Addazio has brought BC to three bowl games in the past four seasons. More than half-empty: watching the Eagles play football during that span has been brutal. The staff has mustered nothing resembling an offense. BC fans know what they are missing. The run of 12 straight bowl appearances happened less than a decade ago. So did BC firing a coach who won 20 games over two seasons because he had the audacity to interview for an NFL job.

12. Syracuse:
It’s not so much the modern reality for Syracuse football fans that is the trouble. It’s that many fans can recall a time when finishing in the Top 25 and reaching major bowl games were things Syracuse regularly did. Things finally lined up for Cuse for 2017. They have a coach with an exciting offense. The Orange have 20 returning starters. They have a team that should make a step forward. Then they get a schedule with road trips to LSU, NC State, Miami, Florida State, and Louisville.

11. Wake Forest:
Wake Forest improved markedly in 2016. They won the Military Bowl to finish 7-6. But you have to deal with being a Wake Forest fan, which means that is about all you can hope for most years. Coach Dave Clawson has improved the team. No doubt about that. But their offense can be so putrid it makes one wonder whether the effort was worth it.

10. Duke:
After a stretch of 27 wins in three seasons and four straight bowl appearances, Duke put up a more Duke-like 4-8 season in 2016. Blue Devils fans must suffer a few more years of futility before re-earning the right to complain. The real issue is how long Duke fans have had to ponder this season, with the men’s basketball team departing so early from the NCAA Tournament.

9. North Carolina State:
Dave Doeren has done just about everything you could ask at N.C. State, except win enough games to demonstrate hiring him was better than keeping relentlessly competent Tom O’Brien. The Wolfpack are everybody’s favorite sleeper team and upset pick every year. They have yet to finish .500 in conference play under Doeren.

8. North Carolina:
Three-straight one-score losses to FBS teams to close last season. Two of them were to your rivals Duke and N.C. State. You’re also probably better aware than most that the 2015 team did not beat anybody. Larry Fedora has done an all right job. All right is good enough when it’s a basketball school and your team just won the national title.

7. Georgia Tech:
Georgia Tech has one dimension, running the option. Sometimes it works, and it’s fun. Sometimes it does not work, and Georgia Tech can’t do anything else. Every few years, things coalesce, and Paul Johnson takes you into the Top 15. Georgia Tech has four division titles under Johnson since 2008, which is four more than Miami. He has been to two “New Year’s Six” bowls since 2008, which is two more than Georgia. Maybe things could be better with how fertile in-state recruiting is, but they could also be much worse.

6. Pitt:
Pitt beat Penn State and Clemson in 2016. Four of their five losses were by one score. They did it all with a prolific offense masking an almost equally porous defense, just what they anticipated when bringing in Pat Narduzzi. Pitt has finally returned to consistent Dave Wannstedt-level competence with some upside. Fans will be hoping Michigan State bounces back and Mark Dantonio sticks around for a few more years in East Lansing.

5. Louisville:
The season fell apart on Louisville in 2016. Still, curb-stomping Florida State, having the Heisman-winning QB, and being a major power in a top football conference was something few could have conceived 10 to 15 years ago. Counterpoint: it still requires a substantial amount of cognitive dissonance to root for Bobby Petrino.

4. Virginia Tech:
Virginia Tech needed a reboot. Things had gotten rather bleak toward the end of the Frank Beamer era. Justin Fuente arrived and improved things markedly in year one, which is what you want to see in a first-year coach. The Hokies finished in the AP Top 20 for the first time since 2011. The “Enter Sandman” intro remains better than Clemson’s. Slight downgrade for the frequency you get asked what a Hokie is.

3. Miami:
Miami is the odds-on favorite to win the ACC Coastal. No one tans better than Mark Richt. Fans are still extant since Miami has not lost to the Seminoles yet. The Hurricanes could be bound for their first top 15 season since (hold on while I look it up…) 2004. Sure, it will go belly up. Miami will find a way to crash down to a 9-4 year Al Golden produced. But it’s Mark Richt doing it now. So the media will view it more favorably.

2. Florida State:
The Seminoles finished the season well and are being hyped into the top five for 2017. Jimbo Fisher’s hair is growing back. National title in recent enough memory. Jameis Winston left, so there’s no longer a need to man the Internet barricades. Things have been better in Tallahassee – like that time Bobby Bowden finished in the top five 14 seasons in a row – but they are still pretty darn good.

1. Clemson:
Non-traditional college football power develops an elite program, takes out Alabama in the title game after coming up just short the year before. Not an awful feeling. In fact, it’s hard to imagine a better feeling. The football program at Clemson is so good that the rest of us have to pretend watching a team bus circle a stadium and a bunch of guys touching a rock before trotting down a hill is a riveting television intro.

What passes for angst at Clemson right now? Ticket prices. Not the increase in ticket prices, but the school trying to get some students to pay for them.