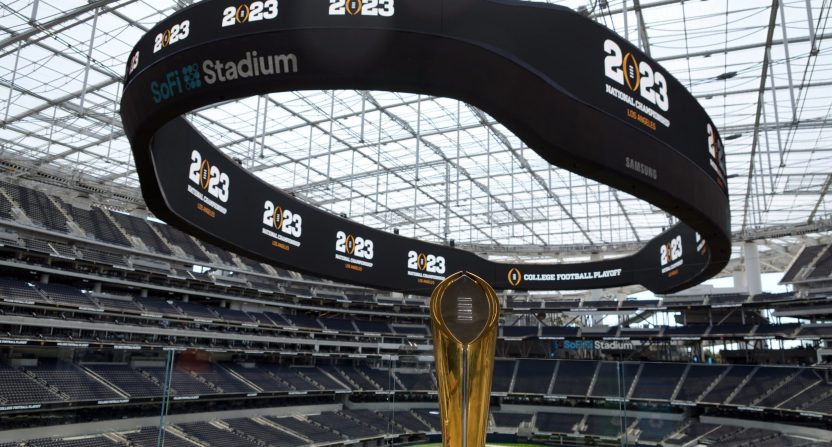 One of the most inevitable outcomes in all of the American sports is that college football will eventually outlast or break away from the NCAA. We apparently moved a little bit closer to that on Monday when, according to ESPN’s Pete Thamel, the 11 college presidents and chancellors on the College Football Playoff’s Board of Managers discussed some options to reshape the sport and how it’s governed.

“Multiple sources told ESPN that the Board of Managers briefly discussed the possibility of restructuring how college football is governed, with the idea presented of major college football potentially being governed outside of the NCAA,” wrote Thamel. “The most logical place for the sport to be run outside of the NCAA would be under the auspices of the CFP, which was discussed on the call. The CFP currently oversees the sport’s postseason playoff and has contractual ties to other marquee postseason bowl games.”

Thamel’s sources cautioned that “these discussions are in such early stage,” though it is certainly possible this is the first step in what could very well be a “marathon.” There are no imminent or expected next steps, however.

It’s worth noting that the CFB Board includes some very heavy hitters, including

Thamel also notes that the idea of CFP expansion was also discussed on the call. While the current contract has four seasons remaining on it, the discussion revolved around the possibility of putting the next version in place before 2025. Previous pushes to expand the CFP beyond four teams have fallen short.

While we wait to see what comes next, if anything, in this very protracted but very expected evolution, there were lots of strong reactions to the report around the college football world.

And so it begins!! This is gonna be interesting to watch. The NCAA may have done themselves in! https://t.co/3fy97Kp3cT

look, for the love of everything holy, just leave the NCAA Tournament alone

otherwise, sure, break football off like a Kit-Kat segment, whatever https://t.co/aseqkLaZf0

Virtually every conference commissioner has publicly stated that a new model should be examined, so no surprise that their presidential counterparts are discussing the possibility. Long way to go here. https://t.co/mXCsVjXeL2

Long-thought to be major college football's next step – breaking away from the NCAA and governing itself – is now being discussed by the folks in charge of the College Football Playoff, per Pete Thamel.

But like Pete said: "these discussions are in such early stages that it could be considered the first steps of a complicated process that would resemble a marathon." https://t.co/T6i073rRQU

Welp. A matter of time. https://t.co/Lp7hNewNyi