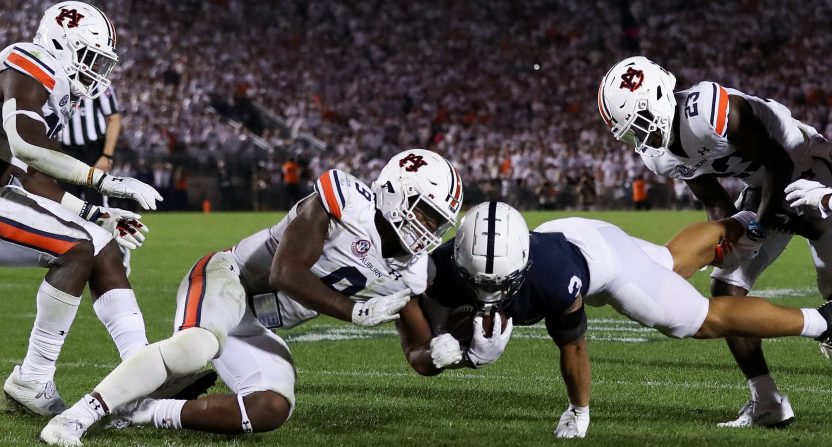 When you think of rules in sports that you don’t like or have a strong opinion about, the targeting rule in college football is probably right at the top of the list. Specifically, the fact that a player gets ejected regardless of intentions or specifics. There have been quite a few instances so far during the 2021 season alone that has had college football fans up in arms.

Targeting rules need to change if this is going to be called targeting pic.twitter.com/XiTAcyWpEX

That may be changing soon. Ross Dellenger of Sports Illustrated reported that college football’s targeting rule might be revisited at the end of the 2021 season. According to Dellenger, there “is movement afoot to at least consider an adjustment to the targeting foul’s most harsh individual punishment—the ejection.”

“In fact, the NCAA’s own coordinator of officials, Steve Shaw, and a handful of conference commissioners as well as athletic administrators and coaches, expect the rule to be examined this offseason,” Dellenger wrote. “By the time the 2022 season kicks off, the hope is that the policy looks different.”

The whole point of the targeting rule is to stop defenders going head-first into opponents and stop head-hunting.

If it’s not that, we gotta cut this call down.

Originally introduced in 2013, the targeted rule has been changed and modified over the years. Now, officials review every targeting call in order to decide if it deserves an ejection. However, if a player is ejected, they are required to sit out the rest of the game as well as half of the next game. It’s a harsh punishment that doesn’t always fit the penalty.

Dellenger spoke with SEC commissioner Greg Sankey, who notes the biggest concern at the moment to making any changes is the lack of a viable alternative.

“I have not seen a sophisticated plan and structure,” SEC commissioner Greg Sankey told Dellenger. “I will be the first to say I’m open to alternative approaches, but they have to be grounded in eliminating these hits. The ejection and suspension from the next half of a game is a fairly blunt instrument, but it makes the point to change behavior.”

Was this targeting or nah?

Gater was ejected after review confirmed targeting on the field pic.twitter.com/gcIbaZ67sA

One solution that has been floated is using a system similar to what college basketball uses to determine flagrant fouls. Dividing targeting rules in the same way there are Flagrant 1 and Flagrant 2 fouls in basketball could help ease tensions when the targeting foul isn’t as overt.

Targeting fouls hit a record last season and are on pace for about the same rate this year.

We’ll have to wait and see what changes come if any. In the meantime, a lot of coaches, players, and fans are going to remain very confused about what qualifies as targeting and why some inadvertent penalties end up costing a guy as much as a whole game’s worth of playing time.