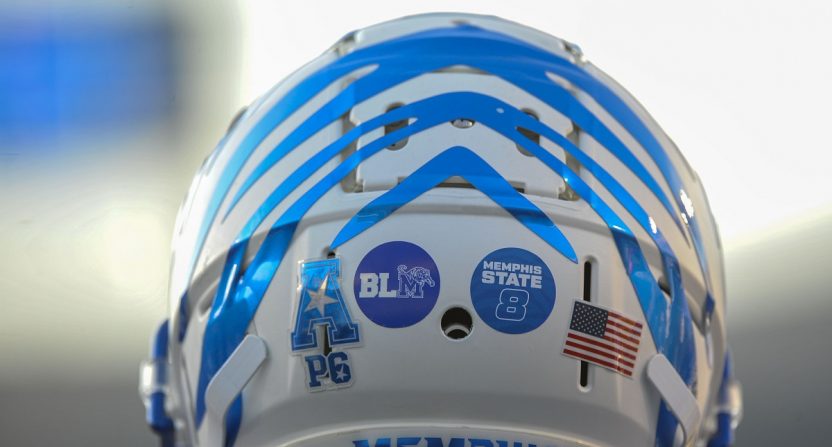 The University of Memphis won their opening game last weekend over Arkansas State, and were set to take on AAC West rival Houston next weekend in a game with potentially big conference implications.

Unfortunately, as with all sporting events in 2020, that was subject to change, and according to a report from Evan Barnes and Mark Giannotto of the Commercial Appeal, the Memphis football program is currently facing a Covid-19 outbreak. That obviously means the Houston game might have to be called off.

Memphis’ Sept. 18 game against Houston is in jeopardy of being postponed or canceled due to a COVID-19 outbreak within the Tigers’ football program, a source with direct knowledge of the situation told the Commercial Appeal on Friday.

The source requested anonymity because no official announcement has been made.

The Tigers have at least 20 people within the program who have tested positive for COVID-19 and are currently in a 10-day isolation period, according to the source.

Outbreaks are happening at colleges all over the country, because of a few easily recognized factors. First, young people are the most likely to be asymptomatic. Second, they’re also, you know, college students, and putting them back at school means they’re probably going to go back to their routine, college student activities. This isn’t a critique of young people, either! A lot of the populace has rejected social distancing and masks in an effort to just get back to “normal”, whether it’s older people at the grocery store or boomers at bars.

Schools, meanwhile, are trying not to become financially insolvent, but they also don’t want to be liable for the actions of college students they had return to campus. It’s a bad situation all around!

Still, there are certain activities that should still be pretty obviously the wrong personal choice. High on that list: riding on a party bus, which according to the report is what several Memphis players did, and could be the source of the outbreak.

The source also said that Memphis has “at least another 20” people in quarantine due to contract tracing. Most of the players who either tested positive for COVID-19 or are in quarantine are on the defensive side of the ball, the source said.

The dramatic uptick in positive tests, according to the source, has been attributed to a party bus that members of the team were on after last Saturday’s season-opening win against Arkansas State.

Jokes aside, let’s hope none of the players affected develop symptoms, and that they were tested in time to help prevent others (especially at-risk people) from being infected as well. Those measures are theoretically in place to allow sports to happen, much less colleges to resume at all, and outbreaks have become an acceptable cost of their return. Whether they should be acceptable is a different debate, of course, but here we are.

UPDATE: Houston and Memphis have agreed to postpone the Sept. 18 game. ESPN’s Sam Khan Jr. adds that Houston “will now travel to Baylor instead” to play each other that weekend, for their first meeting since 1995.

Houston will now travel to Baylor instead. First time since the #SWC days (1995) that they will meet.

And the two schools have also agreed to a home-and-home later this decade. Details: https://t.co/4TUaDdh8Ye