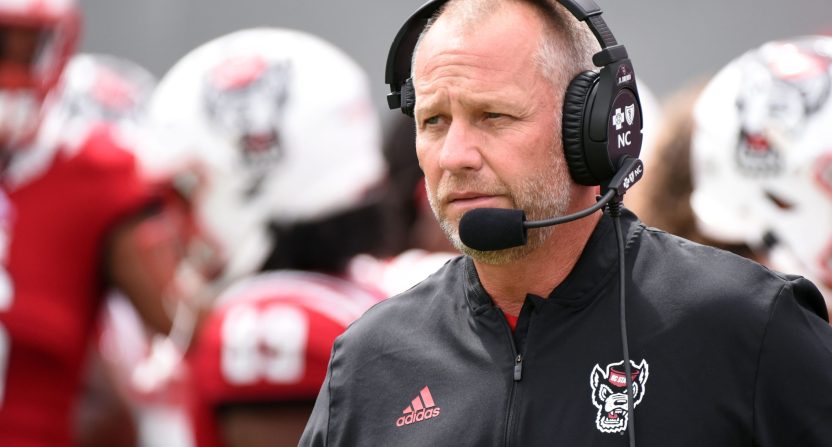 Now that Nebraska has finally fired Scott Frost, the big question is who will replace him as the next head coach?

While much of the early attention was focused on Iowa State’s Matt Campbell, another coach who has been rumored as a potential Frost replacement is North Carolina State’s Dave Doeren. However, when asked about any interest on Monday, he seemed to suggest it wasn’t even something he’d thought about.

“Dude, it’s Week 3 of the season, man,” Doeren said. “I’m so fired up to coach my team this week. So, no. I’m so excited to about playing at home and coaching the Wolfpack. It’s not the first time that names have been on lists and it is what it is when you talk about that. I can’t wait to get ready for this game. It’s a big one for us and a big season and a great group of guys, so that’s where my heart is.”

Deoren is 66-49 in 10 seasons at NC State and while they might not sound overly impressive, he’s turned them into a perennial bowl team and has won at least 8 games in four of the last five years.

Even if Doeren were interested in the position, he recently signed a huge buyout that is said to rival what Nebraska is already paying for Frost. It’s hard to imagine the school’s boosters would break the bank like that for him, unless he leads the Wolfpack to the ACC title this season.

Doeren’s got NC State 2-0 on the season and ranked No. 16 in the nation. Some have even picked them as a trendy College Football Playoff team. But until that’s proven, it seems unlikely that Nebraska will end up calling on him, whether he’s actually interested or not.