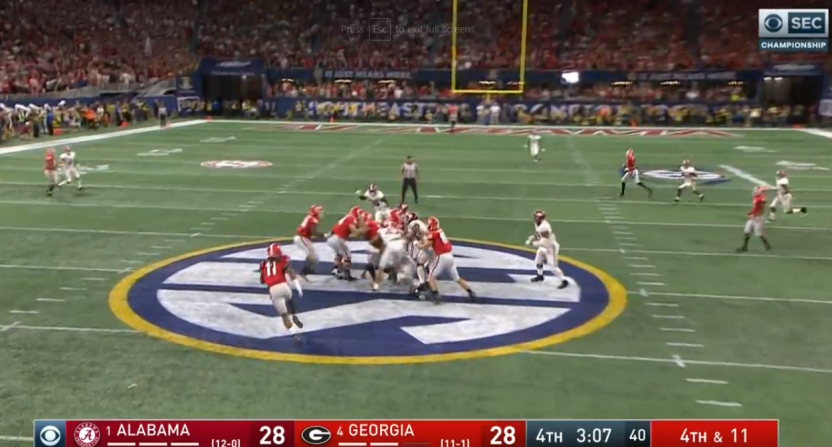 Well, that was a hell of a game. Georgia and Alabama apparently only play entertaining football, as we learned last year in the national championship. Tonight, Georgia surprised just about everyone by taking it to Alabama in the first half, opening up a 21-7 lead and taking a 21-14 lead into halftime.

The Bulldogs stretched that lead out early in the second half, going up 28-14. That lead combined with Tua Tagovailoa going down with an injury sure made a Georgia win seem a lot more likely than anyone realized. But this is still Nick Saban’s Alabama, and being able to bring in a backup like Jalen Hurts to replace a likely Heisman winner. Hurts was certainly ready to play, too; the offense settled down immediately, and Hurts engineered two Tide scores, the second on a broken play.

Georgia still had time to take the lead, but their drive stalled near midfield. Rather than attempt to pin Alabama deep with three minutes left, Kirby Smart elected to call for a fake punt. It did not go well.

There’s a time and place for aggressive playcalling, and that, unfortunately, wasn’t it.

Punted on two 4th and shorts at midfield with lead, fakes 4th and 11 of tie game. Coaching, am I right?

That set Alabama up nicely, and needing just a field goal for a late lead, the Crimson Tide didn’t seem interested in settling for that. Just a few plays later, Hurts was in position to do this:

Georgia didn’t go quietly, though. Jake Fromm marched the Bulldogs into Hail Mary range, and that’s how the game ended:

And that was it. The win for Alabama means they’re likely going to be the top overall seed in the College Football Playoff. Georgia’s season, meanwhile, is an odd one; they essentially had eleven blowout wins against a pretty tough schedule, along with a 20-point loss to LSU and a tossup loss on a neutral field to Alabama. They’re probably not going to get in the playoff, as Alabama, Clemson, and Notre Dame hold three spots while Oklahoma won today.

But imagine Georgia on a neutral field against Notre Dame tomorrow, after what we just saw? They at least merit consideration, and probably deserve to finish ahead of Ohio State (they of the blowout loss to Purdue, which we can’t stress enough) in the final rankings.

As for Alabama, they head to another playoff with a potentially difficult call at quarterback, if Tua’s injury lingers or if he struggles in a playoff game. It’d be quite ironic if Hurts came off the bench to rescue Alabama’s season a year after Tagovailoa did the exact same thing in the national championship game.

That was a lot of fun.