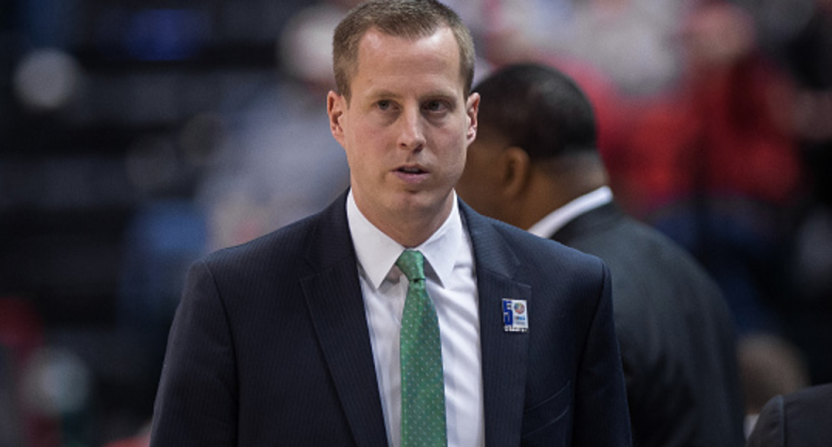 Nobody wants to coach Duquesne.

The position has been vacant for 10 days with several possible names getting thrown around. It looked like the Dukes might’ve finally had their answer Thursday morning. Gary Parrish of CBS Sports reported that Michigan State assistant Dane Fife, a hot name on the coaching carousel for the last few years, was showing significant interest in the job.

An hour later, Fife had already backed out.

UPDATE: Dane Fife has ended discussions with Duquesne. Is no longer pursuing the job, a source told @CBSSports. https://t.co/yVjRAuPifp

Vermont coach John Becker told ESPN that he is staying with the Catamounts after looking at the vacant Duquesne… https://t.co/n1hnuWoHqg

The program’s only big highlight of the past season was beating rival Pittsburgh, which didn’t even have a winning record this year, for the first time since 2000.

Ron Everhart, the only coach to find any moderate form of success there in the last 20 years, was let go despite producing four winning seasons, which is more in his six years than all other Duquesne coaches have combined since 1980.

Everhart, now an assistant at West Virginia, spoke to the Pittsburgh Post-Gazette about his firing ahead of Thursday’s Sweet 16.

“The more time moves on,” he said, “the more difficult it is to get my head around it.”

Becker has a good thing going at Vermont. He’s won at least 20 games in all six of his seasons there, including a 29-win year and perfect America East record this season.

Still, the America East is a bottom 10 league and the Atlantic 10 is a top 10 league.

Previously, Adam Zagoria reported the job was Monmouth coach King Rice’s to lose. You’d think someone who’s won 55 games over the last two seasons but missed the NCAA Tournament both times largely because of playing in a weak league like the MAAC might find some intrigue in moving to a stronger conference.

Rice then denied any involvement in the coaching search.

Considering how the coach who Duquesne canned last week, Jim Ferry, built LIU Brooklyn into an NEC powerhouse and then won less than 40 percent of his games with the Dukes, Becker and Rice are likely making the smart decision.

The other name that interests Duquesne is former Rutgers coach Mike Rice, according to Zagoria. This Rice, unrelated to King, lost the Rutgers gig in 2013 after ESPN’s Outside The Lines showed video of him abusing his players in practice with everything from hurling basketballs at their heads to using homophobic slurs.

Mike Rice had great success at Robert Morris. He’s also the son of former Dukes coach Mike Rice Sr., who won two conference titles in the early 1980s. But going in that direction with this hire would undeniably bring plenty of controversy.

That’s what this job search has dwindled to. Assistant coaches don’t want Duquesne as their first job. Hot mid-major coaches don’t see the position as worthy of leaving a secure job in a worse conference.

And now Duquesne can choose between a man who abused his players or some other option from the bottom of their list. And who even knows if that person would finally be the one to say yes.

Ball State has not been to the NCAA Tournament since 2000. Whitford’s base salary is under $300,000 while Duquesne paid its previous coach $600,000. But he still does not want to coach the Dukes.

After much Prayer and thought with myself and my family I have asked Duquesne University for permission to contact other schools ????

Moving on down the list, Duquesne has set it sights on Akron coach Keith Dambrot, according to CBS Sports’ Jon Rothstein. Dambrot has won four of the last six MAC regular season titles. He’d be a great get for Duquesne — if they can actually get him.