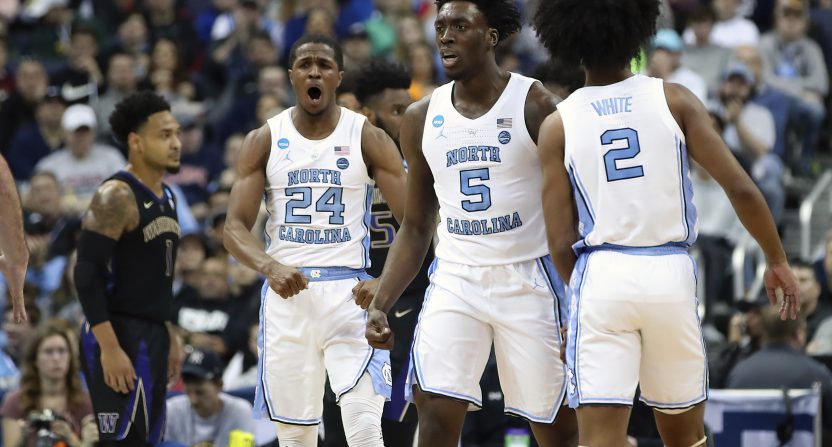 COLUMBUS, Ohio — You could have labeled the Midwest Region the Darwin Region. Survival of the fittest. When the brackets were revealed, it was saturated with college basketball blue bloods: North Carolina, Kentucky, and Kansas. Well, Kansas is gone but you could argue that it remains a treacherous path.

No. 1 seed North Carolina’s road to the Final Four is tough, but the good news for the Tars Heels is they keep getting better. Except for a poor first half against Iona when they trailed 38-33, they have been very impressive. Over the past 60 minutes of basketball, they have outscored the opposition 136-94, culminating in Sunday’s 81-59 domination of No.9 Washington.

“I think, needless to say, anybody that advances past this point you feel good about a win,” said coach Roy Williams whose team suffered an 86-65 beatdown as a No. 2 seed to No. 7 Texas A&M last year in the second round. “Last we year we had a really nice year and stumbled. We walked about it quite a bit this summer.”

North Carolina entered the tournament with the fourth-best odds to win the national championship. The Tar Heels trailed favorite Duke, Gonzaga, and Virginia. That was largely due to the strength of their region. Perhaps they were undervalued. Few teams are playing better. The Tar Heels have won 17 of 19, with those losses coming against fellow No. 1 seeds: Duke (74-73) and Virginia (69-61).

“Throughout the course of the second half of the season I think we’ve gotten better and better,” said Williams, who is gunning for his fourth national championship. “But so has Auburn, and some of these other teams that we are going to be playing. But I like how out kids have focused down the stretch.”

Williams’ winning ways have usually centered around speed. He ran the opposition into submission at Kansas. He has continued to do that at North Carolina. It says a lot that in Year 16 he might have his quickest-paced squad. North Carolina entered this tournament as the fastest-playing team in the field. The Tar Heels were fifth overall in the nation in adjusted tempo. They were also are averaging 78 possessions per game – fifth most in the country.

The triggerman for his offense is freshman point guard Coby White. With his ‘do, he’s hard to miss.

What objects could you hide in White’s voluminous hair?

If you answered D, congratulations. White hair magnificently bobs as he motors down the court. He shifts speeds with terrifying efficiency – maybe even better than Ty Lawson, the speedy point guard for Williams’ second NCAA title team with North Carolina in 2009. Williams told cbssports.com: “We’ve never played as fast as I want us to play.”

Against Washington, North Carolina only got four fast-break points. However, White puts a lot of pressure on a defense. And he’s fully capable of initiating his own offense. The freshman scored 12 of his 17 points in the first half, and made 4-of-7 three-point shots for the game. One number tells White’s impact: North Carolina was plus-26 with him on the floor.

But it’s not just about White. North Carolina has a veteran presence: senior Luke Maye, a member of the 2017 NCAA title squad. It has a hungry transfer: second-year player Cameron Johnson, formerly of Pittsburgh. And it’s got a freaky athlete in Nassir Little, another stud freshman. Little had 15 of his 20 points against Washington in the second half.

North Carolina still hasn’t played its best. For that reason, the Tar Heels might have the biggest upside of the remaining teams.

North Carolina, the Atlantic Coast Conference co-champion with Virginia, swept Duke in the regular-season, though both those victories have an asterisk. Duke’s Zion Williamson got hurt and left the game in the first matchup, and didn’t play at all in the second game. When Williamson returned for the ACC tournament, Duke edged North Carolina in the semifinal 74-73.

How good can North Carolina be? Up next is an Auburn team that vaporized Kansas 89-75. If the Tar Heels survive, they could potentially face No.2 Kentucky. Those programs met in December with the Wildcats winning 80-72.

Both North Carolina is much different team now. A lot tougher in the tournament’s toughest region.

“A lot of teams in this tournament are good all around,” Johnson said. “It more comes down to matchups. But we’re focused on what we’re doing.”