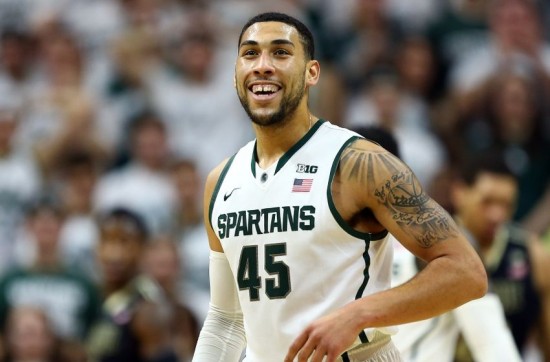 Welcome to Five College Basketball Questions You Need Answered. Any retransmission of this column without the express written consent of the author is prohibited and punishable by wearing possibly the ugliest holiday sweater of all time (more on than later).

No.1 With Denzel Valentine out for 2-3 weeks, who will step up for Michigan State?

You don’t just replace a leading national player of the year candidate. Valentine was a triple-double waiting to happen, leading the Spartans in points (18.5), assists (7.0) and rebounds (8.3). Minor knee surgery will sideline the senior but it will also open the door for junior guard Eron Harris.

According to the Lansing State Journal, Michigan State coach Tom Izzo said this could potentially be a “shot in the arm” for Harris.

You might remember Harris, who will move into the starting lineup in Valentine’s absence, as he was considered a major acquisition for Michigan State when he transferred from West Virginia. As a sophomore, he averaged 17.2 points and 3.5 rebounds for Mountaineers. The Spartans beat out Michigan and Purdue for Harris’ services.

After sitting out 2014-15 due to transfer rules, Harris was expected to have a significant role for Sparty. Instead, he has been almost an afterthought this season. Harris (a career-low 7.0 ppg) hasn’t started a game and is shooting 40.3 percent. He has also struggled on the defensive end while learning Izzo’s system.

“You’ve got to go through struggles before you get great,” Harris told the State Journal earlier this season. “I want to be great. It’s a blessing to be here in a place where greatness is expected.”

Now is Harris’ chance, starting with tonight’s game against Oakland. If Valentine misses three weeks, Michigan State will play five games – three on the road – without him. That will include four Big Ten games: the opener at Iowa, at Minnesota, home against Illinois and at Penn State.

Michigan State has played only one true road game so far this season. Without Valentine, this stretch will be a test.

No.2 Who is the best of the mid-majors?

Outside of the Big Five conference teams, the tradition powers and the nouveau riche (Gonzaga, Wichita State, etc.), there are some mid-majors that could crash the March Madness party. Some of the more impressive teams are Valparaiso, Northern Iowa, Monmouth and Arkansas Little Rock.

Valparaiso (10-2) has made the NCAA tournament the past two seasons. Northern Iowa (7-3) has beaten two top five teams: then top-ranked North Carolina and No.5 Iowa State. Monmouth (8-3) owns victories over UCLA, Notre Dame, USC, Georgetown, Rutgers and has that wacky bench. But what about Arkansas Little Rock (10-0)?

Little Rock is one of the six remaining unbeatens in the country. The Trojans are receiving votes in the Associated Press poll and the coaches poll. They haven’t played a ranked team but are 5-0 on the road, including wins at San Diego State, East Carolina, Tulsa and DePaul.

This is remarkable for a team that was picked fifth in the Sun Belt, with nine newcomers and a first-year coach.

Chris Beard is best known for being a longtime assistant under Bob Knight at Texas Tech. For the previous two seasons, he was a head coach at Division II Angelo State. He has rebuilt Arkansas Little Rock with help from JUCO transfer guard Marcus Johnson Jr. (15 ppg) and veteran Josh Hagins (11.).

“The credit goes to the players,” Beard said. “They’re the ones that have bought in. For things to have come together so quickly has been impressive.”

This is not as ridiculous as it seems. Alvarez has already made this move twice. In 2012, when Bret Bielema left for Arkansas, Alvarez coached the Badgers in the Rose Bowl. Last year, when Gary Andersen bolted, Alvarez once against put himself in change for the Outback Bowl.

With Bo Ryan walking away mid-season, Greg Gard is the interim coach. That doesn’t mean things couldn’t go awry down the stretch. What if Gard figures out quickly he won’t get the job on a permanent basis?

All the 68-year-old Alvarez has to do is say “Mirror, mirror, on the wall, who’s the fairest Badgers coach of them all?” The answer might be staring right back at him.

Impressive restraint by Barry Alvarez not to take over as interim basketball coach.

Barry Alvarez is already asking if he gets a bonus if he coaches the Wisconsin Basketball team in a bowl game.

Will Barry Alvarez name himself Bo Ryan's temporary successor & coach out the basketball season for a minimal $3 million fee?!

No.11 Iowa State (9-1) at No.22 Cincinnati (10-2) tonight. Iowa State coach Steve Prohm and Cincinnati coach Mick Cronin both used successful mid-major stints at Murray State to land big-time jobs. For Cincinnati, this is a chance to beat a ranked team after losses to Butler and Xavier. For the Cyclones, they will try to get their mojo back after losing to Northern Iowa 81-79 last Saturday.

And speaking of Iowa State.…

No.5 Could this sweater singe your retinas? 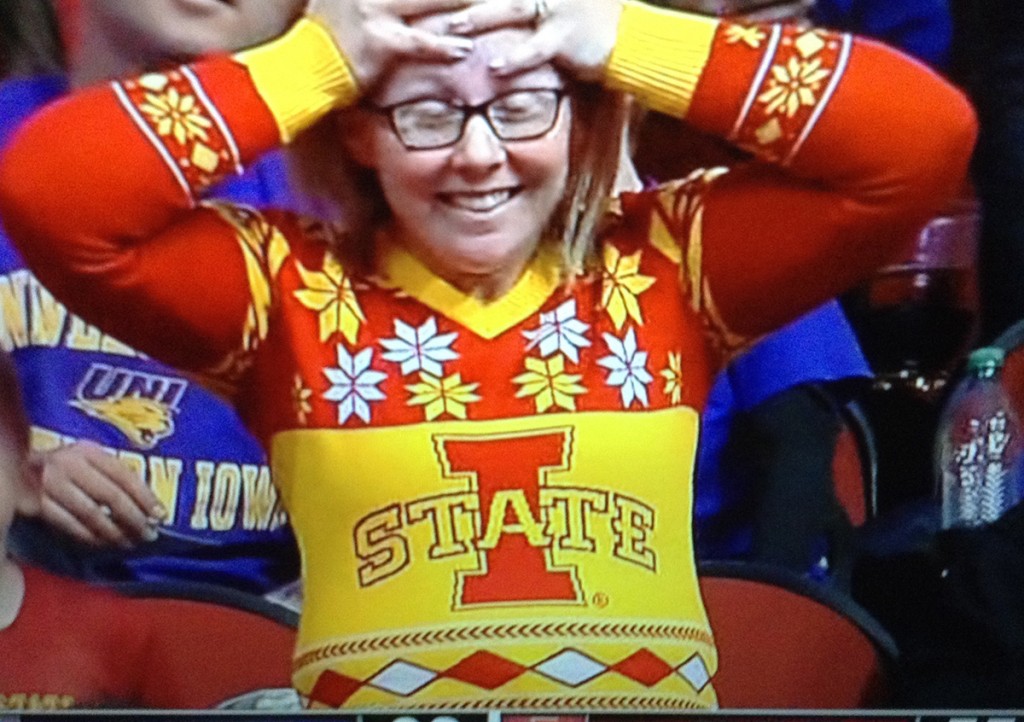 Everyone loves a good ugly sweater-themed holiday gathering. However, this Iowa State fan takes the party to a new and potentially dangerous level. Exposure to this color scheme will send you to the emergency room.

If you are going wear a gaudy sweater, this would be a far better option: