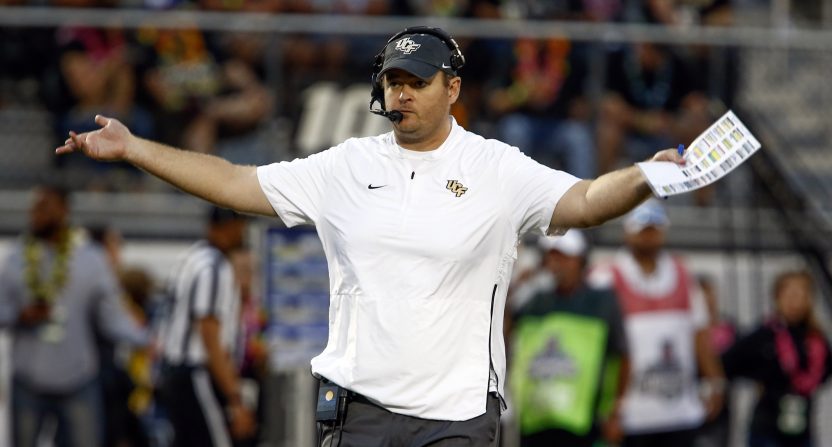 You know about the Power 5 college football schools. But what about the Group of Five?

Here are five coaches who could emerge as hot candidates at bigger programs:

Josh Heupel doesn’t have a lot of head coaching experience. The former Missouri assistant was handed the keys to a UCF program that Scott Frost quickly built. Frost was there for only two seasons before bolting for Nebraska. Perhaps Heupel’s stay will also be short. In his rookie year, the Knights were undefeated until a 40-32 Fiesta Bowl loss to LSU, snapping a 25-game winning streak. UCF finished the year ranked No. 12 in the coaches poll. This year, it enters the preseason coaches poll at No. 17, led by a terrific backfield tandem of Greg McCrae and Adrian Killins.

Heupel is a name of significance. The 2000 Heisman Trophy runner-up quarterbacked Oklahoma to a national championship. He later became an offensive coordinator at his alma mater under his mentor Bob Stoops. But Heupel was fired after the 2014 season following a humiliating 40-6 defeat to Clemson in the Russell Athletic Bowl. He slowly rebuilt his career with stops at Utah State and Missouri before landing his current job. If UCF finishes ranked for a third straight year, someone will take a serious look at Heupel.

Bill Clark is presiding over one of the greatest college football stories of the decade. He originally arrived in 2014 and then saw the university kill the football program. The school brought it back from the dead, but it wasn’t until 2017 that the Blazers returned to action. Somewhat surprisingly, Clark didn’t bolt during the two-year hiatus. He stuck it out and immediately turned UAB into a winner. The Blazers shockingly went 8-5 in their first season back. Last year, they culminated the turnaround by going 11-3, winning the CUSA championship and the Boca Raton Bowl. UAB set a school record for victories and won its first ever bowl game. Clark won the Eddie Robinson Coach of the Year Award.

UAB, picked to finish fourth Conference USA’s West Division, is expected to be in rebuilding mode. In the off-season, Clark reportedly became the conference’s highest paid coach. He has spent his entire coaching career (high school and college) in Alabama. Would an SEC school (Auburn?!?) take a chance on him?

Mike Norvell is one of the younger coaching candidates out there. He’ll turn 38 in October. Most coaches don’t get Power 5 jobs until their 40s. He took over Memphis in 2015 after Justin Fuente left for Virginia Tech. Norvell has kept the Tigers relevant. Last season, Memphis was the favorite to win the American Athletic Conference West but finished in a three-way tie along with Houston and Tulane. The Tigers still played for the AAC title, but lost to UCF.

This season, Memphis is expected to win its third straight divisional title. But it’s only a slight favorite over Houston. The Tigers have the league’s premiere running back in Patrick Taylor, who has been named to the Maxwell Award Preseason Watch List.

Last winter, Norvell was mentioned as a candidate for Louisville, Texas Tech, and Colorado. He’s known for his offensive acumen. Norvell has been an offensive coach in Tulsa, Pittsburgh, and Arizona State. His Pac-12 ties should make him an ideal candidate in that league.

Seth Littrell got a contract extension in May, but contracts don’t mean much in college sports. He reportedly turned down the Kansas State job last winter. That tells you that Littrell believes he’ll eventually land a better gig. Another reason to come back: he should have a great team. North Texas, keyed by senior quarterback Mason Fine, is favored to win Conference USA’s West Division. If the Mean Green deliver on high expectations, Littrell’s stock will be at an all-time high.

Before Littrell came to North Texas, the program has made one bowl trip in 11 years. This season, he’ll be gunning for his fourth bowl appearance in four seasons. While the Mean Green are still searching for their first bowl victory under Littrell, this could be the program’s best team. Fine is the CUSA preseason offensive player of the year, leading five all conference selections. What school could be interested in Littrell? He was an assistant at Arizona (2009-2011). If Kevin Sumlin gets the boot, that could be his landing spot.

Boise State is like the Gonzaga of football. It’s major program in a mid-major conference. The problem: Gonzaga can compete for a national championship. Boise State, because of a flawed and archaic system, cannot. That lack of opportunity could be the reason why Bryan Harsin leaves.

Harsin is a premiere coaching candidate. He has been consistently excellent for five years. The Broncos have won their division every season except one, winning three bowl games (last year’s First Responder Bowl was cancelled due to severe weather). They have also finished the season ranked three times. This season, Boise State is picked for the sixth straight season to win its division. Its entire offensive line returns, led by guard John Molchon and tackle Ezra Cleveland.

Harsin figures to have his choice of jobs. The biggest opening could be at USC, but the Trojans tend to keep things in the family and Harsin has no ties to the school or California. Harsin was previously the head coach at Arkansas State (2013). If Chad Morris is fire from Arkansas, that could be a possibly.