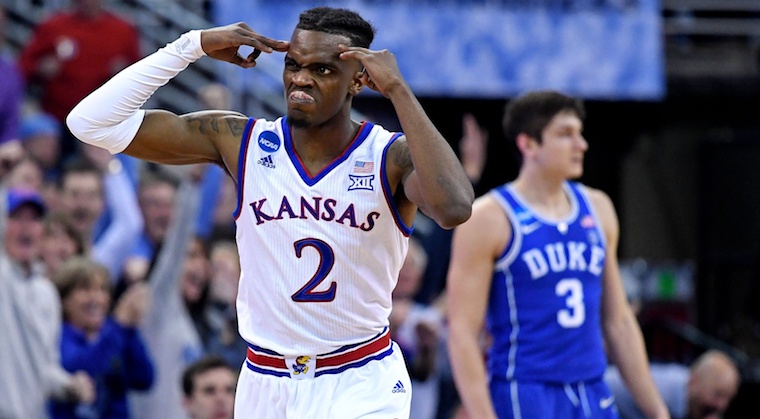 It’s all over. The 2017-18 college basketball season has come to an end with Villanova as the national champion. It was a gloriously surprising NCAA Tournament – one of the best in a long time.

But as exciting as the tournament was, there are some tweaks that could have made it even better. For your consideration, we offer a radical proposal on how to improve the greatest spectacle in sports.

Let’s start with something truly revolutionary.

A long time ago in a galaxy far, far away, the NIT used to be a bigger deal than the NCAA Tournament. Ask your grandfather. But let’s be real. The NIT has very little juice.

For the schools, alums and relatives of the players, winning the NIT may mean something. However, if you have no personal rooting interest, there isn’t a compelling reason to tune in. Remembering the previous five NCAA national champions is easy: North Carolina, Villanova, Duke, Connecticut and Louisville. Can anybody – without resorting to Google – name the previous five NIT champs?

The NIT needs an energy infusion. Rule changes like a longer 3-point arc and moving from halves to quarters isn’t enough. So here’s a proposal: the winner of the NIT should get an automatic bid to next year’s NCAA Tournament. No, it doesn’t benefit seniors who will be out of eligibility but it would provide a great incentive for the school and the younger players. It would be fun knowing the first bid for 2019.

Teams must finish above .500 in conference play to be eligible for an at-large bid

One of the criticisms of college basketball is that the regular season isn’t as meaningful as it should be. You can erase a mediocre season by having a great March. One way to improve the sense of urgency is making conference play more important. A team that doesn’t have a winning record in its league doesn’t deserve an at-large berth. (We’re looking at you, Syracuse: 23-14, 8-10 Atlantic Coast Conference.)

Save your takes about Syracuse reaching the Sweet 16. Whether or not you should be in the tournament vs. whether or not you can win games in the tournament are two different questions. Syracuse was the last team in the field despite losing three of its final four games with an already lukewarm résumé. It did not merit a berth over a mid-major like Middle Tennessee which doesn’t enjoy the built-in scheduling advantages of a Power 5 conference team.

The counter-argument is that some conferences are tougher than others. For a school to at least have a winning record in its own league shouldn’t be asking too much.

Play-in games for Power 5 schools only

Imagine you’re a small school like Texas Southern. You play in the Southwestern Athletic Conference, arguably the worst league in America. You fight your way into the NCAA Tournament. What’s your reward? The selection committee sends you to Dayton to play in the First Four against another mid-major: North Carolina Central of the Mid-Eastern Athletic Conference, the second-worst league in the nation.

Officially, Texas Southern can say it won an NCAA Tournament game and there is a financial benefit to the economically challenged SAC. This still seems wrong. A No. 16 seed shouldn’t play another No. 16 to start the tournament. They should open up immediately against a top seed.

Only middle-of-the-pack Power 5 teams should be in play-in games. The committee did the right thing by making Syracuse “play its way in” against another big school (Arizona State). It should be that way with play-in games. That would make the First Four much more interesting. The average fan would want to see Oklahoma State vs. Marquette or Baylor vs. Notre Dame rather than two No. 16 seeds duke it out.

I've given MLB plenty of grief for starting World Series games as late as it does. So it's only fair to point out that it's 9:14 p.m. ET and the men's national championship game still is at least five minutes from tip-off. I don't get it.

Why is the NCAA title game tip-off on a Monday at 9:20 p.m ET? I’m assuming television has metrics that support this being the best possible time. However, for those who have regular East Coast jobs, this isn’t ideal. For young kids, playing on a school night isn’t optimal.

Wouldn’t it be better to move this game to Sunday with a 6 p.m. start? There isn’t another competing major sporting event. From a viewership standpoint, wouldn’t the ratings be appreciably better in this time slot?

This is my annual complaint that the NCAA tournament starts WAY TOO LATE TONIGHT.

The lone issue might be playing the semifinals on a Friday night – traditionally the worst night of the week for viewership. If that’s the case, why not move the semifinals back to Thursday night, starting the first game at 6? That’s right. There would be two days off between the semifinals and the title game. The coaches wouldn’t complain about an extra day of rest and preparation.

Get Jay Bilas and Jay Williams on the coverage

Turner/CBS does the best it can. Charles Barkley and Kenny Smith are entertaining. But a NCAA Tournament without top-notch analysts is lacking.

Bilas is college basketball’s most credible voice. He’s extremely informative and one of the few people in sports media who immediately improves the game-watching experience. Williams is a fearless thinker who raises important questions about the state of the game.

Find a way for ESPN and Turner/CBS to make this happen.