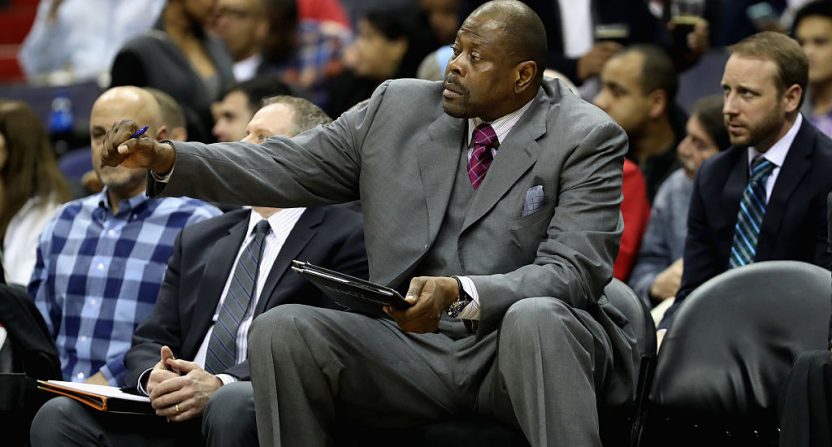 From the moment Georgetown made the decision to cut ties with John Thompson III, there was one coaching candidate that appeared to tower over many other possibilities. It just so happened to be one of the greatest players to ever play for Thompson III’s father, John Thompson Jr.

Patrick Ewing was expected to be a candidate for the Georgetown vacancy, and now, after the program has taken its time going through the process, everything appears to be falling together. Multiple reports on Monday say Georgetown has hired the former Hoyas star in what will be Ewing’s first head coaching job of his career.

Adrian Wojnarowski reported, via Twitter, that Ewing has a multi-year deal and will leave his current occupation as an assistant coach with the Charlotte Hornets immediately.

Ewing coming home to Georgetown has a chance to rekindle enthusiasm in the program by reuniting one of the program’s all-time greatest players with the program. It is far from a guarantee it pays off, but for Ewing, it appears to be a perfect next step in his coaching career.

Since retiring from playing in the NBA in 2002, Ewing has held assistant coaching positions with the Washington Wizards, Houston Rockets, Orlando Magic, and Charlotte Bobcats. This will be Ewing’s first head coaching gig, and it is important to keep in mind coaching in the college ranks can be much different from what Ewing has accustomed himself to over the past 15 years.

Ewing will now be in charge of an entire program, and it will be a year-long job that involves recruiting on top of coaching and preparing. How smoothly he makes this transition will likely be dependent on his supporting staff he builds around him. This is not to suggest Ewing doesn’t have what it takes to recruit because his presence alone should be dominant enough to leave quite an impression on the recruiting trail.

After all, it’s not every day you have a chance to have a Hall of Fame player walk into your living room and recruit you. If Ewing can have his own story and journey connect with recruits, maybe Georgetown can bounce back in a big way in the Big East.

The hiring of Ewing also provides a bit of juice to the Big East, which now has Ewing and Chris Mullin (at St. John’s) coaching basketball. That should be fun to watch from a rivalry standpoint, especially considering how things went down between the two programs toward the end of a Big East tournament matchup last month.

Patrick Ewing and Chris Mullin: In the 1980s, they defined Big East basketball.

Now, both are back as head coaches at their alma maters. pic.twitter.com/3yIhomPjaM

Georgetown has some work to do to rebuild its standing in the Big East. Georgetown has made just one NCAA Tournament appearance in the last four seasons and had back-to-back losing seasons for the first time since 1972-1973, seven years before joining the original Big East.

Ewing in the Big East? This has loads of potential to be a good thing.