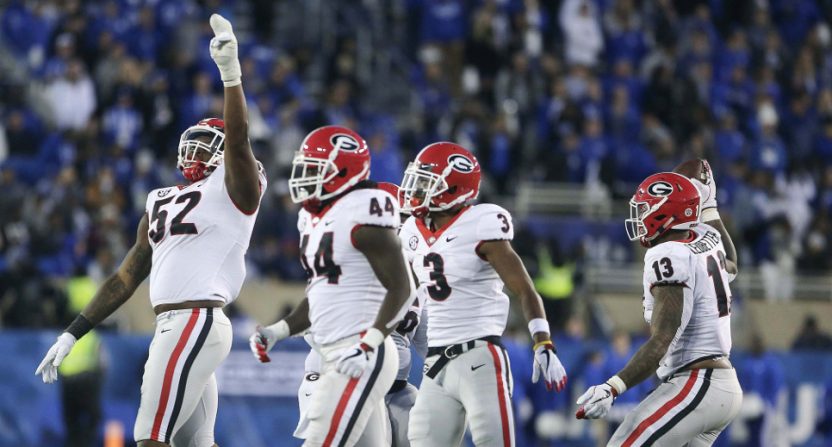 After taking on each other in the first College Football Playoff national championship game featuring two teams from the same conference, it appeared the 2018 season would be a two-team race in the SEC between Alabama and Georgia. With the results around the conference on the first Saturday in November, it now officially is.

Alabama will face Georgia in the SEC Championship Game on Dec. 1 at @MBStadium in Atlanta. It is the earliest (Nov. 3) both participants have ever been determined in the history of the game.

Georgia clinched the SEC East Division title Saturday afternoon with a 34-17 victory over Kentucky in Lexington. The Bulldogs’ road win at No. 9 Kentucky gave Georgia a 6-1 record in SEC play and head-to-head victories over Kentucky and Florida, as well as South Carolina. With just one conference game left to play before closing out the regular season with non-conference matchups, Georgia now already knows they will be heading back to Atlanta for a second straight season for a chance to earn outright back-to-back SEC championships for the first time in program history.

“It hasn’t been easy and it’s never easy,” Georgia head coach Kirby Smart said after the game, reflecting on what it means to win another SEC East title. “Sometimes I think people get spoiled when you win and these are good programs and teams. I give our kids a lot of credit because their backs were against the wall two weeks in a row and they came out fighting, scratching and crawling.”

Since adding a conference championship game in 1992, this will be the third time Georgia has played in the SEC Championship Game in consecutive seasons (2002-2003, 2011-2012). It will be the first time Georgia has faced Alabama in Atlanta for the SEC title since the 2012 season, although memories of their last game played in Atlanta will be fresh on the minds of the Bulldogs. It was in Atlanta and the Mercedes-Benz Stadium where Georgia squandered a second half lead and freshman quarterback Tua Tagovailoa stepped in to rescue Alabama in the national championship game.

This year’s #SECChampionship looks a lot like the National Championship… Oh wait.

Later, on Saturday night, Tagovailoa led No. 1 Alabama to the SEC West crown with a road victory over No. 3 LSU, a 29-0 victory in Baton Rouge. Even with two SEC games to play against supposedly-formidable division foes in Mississippi State and Auburn, both at home, the Crimson Tide locking down the division so early was seen from a mile away the way this season has been playing out. Of the 540 minutes of football Alabama has played this season, they have trailed for just 1:10. If LSU was to be the biggest hurdle for Alabama left in the way of a trip to Atlanta, the Crimson Tide made like a gold-medal Olympian on a training run. It’s just business as usual for Alabama, who has shown no reason to question their ranking atop all of the major polls from the start of the season.

Tagovailoa took some shots from LSU that may have some Alabama fans at least mildly concerned moving forward, but he still managed to throw for 295 yards and a touchdown, giving plenty of reasons to forget he threw his first interception of the season. Even with Tagovailoa banged up (he played with a brace on his leg during the game), the question now becomes whether or not Georgia can beat Alabama.

This will drive Alabama head coach Nick Saban nuts the next few weeks. With the SEC Championship Game already locked in and likely to determine some seeding within the College Football Playoff, Saban (and Smart) will have to deal with the questions trying to look too far down the line to the SEC Championship Game and the College Football Playoff. Instead, the focus must remain on what has gotten Alabama and Georgia to this point. There is no reason to suggest either team is going to veer off course in the next few weeks, though.

There will be plenty of time to dig into how this particular conference championship game will impact the College Football Playoff, but this much seems certain. The winner will be in the playoff. The SEC champion has been in the playoff each year, with Alabama being that team the first three years and Georgia advancing last season. Of course, Alabama proved last year it may just take two losses to knock Alabama out of the national title race, so a loss to Georgia may be far from an eliminator for the Tide if they get to Atlanta with a clean 12-0 record.

Alabama and Georgia will square off in Atlanta in just four weeks. Everything between now and then will just be the appetizers along the way.