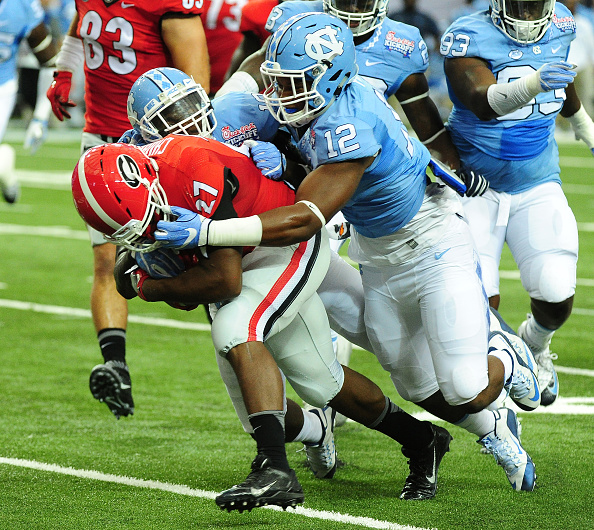 Coming into the season, the Georgia Bulldogs had a couple of question marks on offense.

On Saturday night, the Dawgs found their answers in an impressive 33-24 victory over North Carolina.

While running back wasn’t exactly a question mark for Georgia coming into the contest, there were still a few unknowns. Sure, Nick Chubb was in uniform, but there was no way to know whether he was 100% after last year’s season-ending injury. Similarly, there were concerns about depth in the Bulldog backfield with Sony Michel out the lineup.

After Saturday night’s contest, no one – other than opposing defensive coordinators – is going to worry about UGA’s running backs. Chubb flashed the form that made him the most dangerous runner in the country in 2015, gashing the Tar Heel defense for 222 yards and two touchdowns. Brian Herrien (7 carries, 59 yards) and Brendan Douglas (3 carries, 22 yards) both played well when given the opportunity, alleviating any concerns about what kind of depth there is behind Chubb.

The other answer that Georgia found on Saturday was at the quarterback position. Yes, Greyson Lambert won the starting job, but it was tough not to wonder what would happen if the Dawgs fell behind. Would UGA stick with Lambert or turn to true freshman Jacob Eason?

Eason answered that question for us. His mere presence in the lineup opened up things up for the running game, which helped the Bulldogs jump out to a first half lead. After Georgia fell behind 24-14 in the third quarter, Eason came back into the game to guide the Dawgs to a much-needed touchdown. He played with the poise of a fifth-year senior, keeping the drive alive with three first down conversions before shoveling the ball to Isaiah McKenzie for his first career TD.

Although it didn’t seem important at the time, this touchdown would completely turn the tide in the contest. Thanks to a penalty and a head-scratching play call by Larry Fedora, Georgia tackled North Carolina in the end zone for a safety, cutting what was a 10-point lead to just 1. The Tar Heels clearly weren’t the same after this series of events. The offense that was clicking on cylinders to grab a double-digit lead, failed to score in the final 15 minutes of the contest.

Aside from finding some answers, what does this game mean for the Bulldogs?

Simply put: it makes them a contender to win the SEC East this season. Georgia didn’t win the division last year because it struggled on offense. The depth at tailback plus the addition of Eason makes the offense much more explosive than it was a year ago. Couple that with a stellar Dawg defense — which held North Carolina to just 5.9 yards per play — and you have all of the ingredients of a championship team.