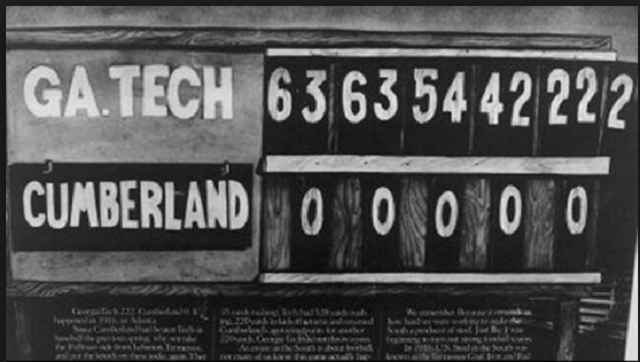 Exactly one century ago, a record-setting football game was played. The records, and there were many of them, will never be broken. The game was shocking. It should have revolutionized the sport of college football. But that never quite happened, and it’s something which needs to be considered when looking at how teams are ranked.

Before we get to the lessons that should have been taken, however, let’s look at the game itself. This game, remarkably, still holds the record at any level of football (and these records will almost definitely stand forever) for most total points, most points by a single team, most touchdowns, and most extra points in a single game, among others. This game was mentioned in Ripley’s Believe it or Not! and in the Guinness Book of World Records.

Georgia Tech, coached by the legendary John Heisman (yes, that Heisman), defeated Cumberland College by a score of 222-0 on Oct. 7, 1916. 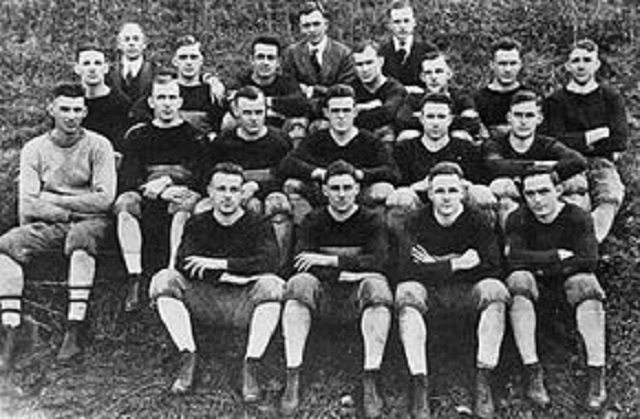 In 1916, Cumberland College did not field a football team. The team had been disbanded the year before. However, Cumberland had been contracted to play the game. Coach Heisman told Cumberland that the school would have to pay $3,000 to recoup the lost money in ticket sales, but offered the school $500 to play the game. So Cumberland, not having an actual football team, sent enough players from Tennessee down to Atlanta to play a game to which fans could pay for tickets.

The game itself actually becomes unremarkable in just how predictable and remarkable it was. Georgia Tech scored a touchdown on every single possession. Every single possession for Cumberland ended in either a turnover (there were 15), a failed fourth-down attempt, or a punt. Cumberland did not gain a single first down all game. Cumberland’s official yardage statistics for the game were 14 passing yards (including its biggest play of the game, a 10-yard pass) and -42 rushing yards, for a total of -28 yards. Georgia Tech, meanwhile, gained 978 yards, all on the ground. The Engineers (as they were then known) did not throw a single pass all game.

You can find legends and stories about this game in all kinds of college football books. There are stories of Cumberland players climbing fences to escape, hiding under the Georgia Tech bench, and even refusing to pick up fumbles. Some actually think that fourth-down failures by Cumberland somehow kept Georgia Tech to fewer points than punts would have.

The Lessons of the Game 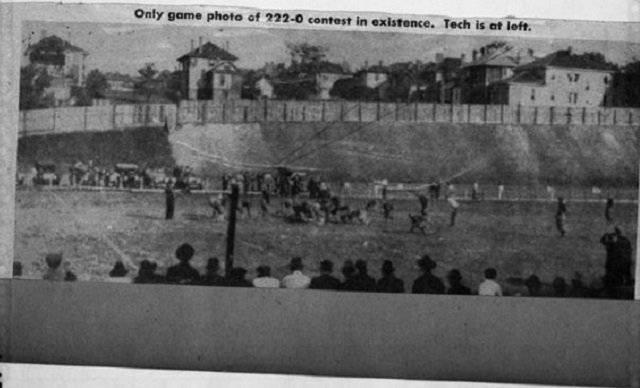 According to Bruce Nash in Football Hall of Shame, there is a second reason for this blowout occurring, aside from the contractual obligation. Nash claims — and this should be obvious to any college football fan — that Heisman was upset that some voters would just look at box scores instead of judging how good a team, and its opponent, was.

National champions were much harder to determine back then, with voters having no access to things like game film. Unless a voter attended a game in person, there was no way to see what happened. Voting was based on wire reports, word of mouth, and mostly box scores. Heisman wanted to prove a point that a box score is only useful when you understand the quality of the opponent. Beating an awful team by 222 points is meaningless because none of the players on the opposing team might be actual football players. Heisman drove home a lesson that still resonates today, a century later: When playing a game with such a huge talent disparity, the difference between winning by 40 or winning by much more than that is only about the superior team deciding to back off.

Even now, through the days of the polls, the BCS (which relied on human polls for most of its rankings), and the College Football Playoff, we fall prey to this. Voters, and by extension the selection committee, see gaudy blowouts and think that a team that can win a game 77-3 must be a good team. 100 years later — though we are now much better about it — we have still failed to fully learn the lesson that John Heisman (allegedly) wanted to teach the media of his day.

It should be noted, in a weird quirk of history, that 100-point blowouts were not entirely unheard of in the pre-modern era. They were certainly rare, but they did happen. In fact, on the same day that Georgia Tech won 222-0, the University of Central Oklahoma beat Oklahoma Methodist University (now Oklahoma City College) 183-0. One week later, St. Viator College defeated Lane College 205-0. Three of the four highest-scoring games in football history all occurred within a seven-day period (King University defeated Lenoir-Rhyne University by a score of 206-0 in 1922).