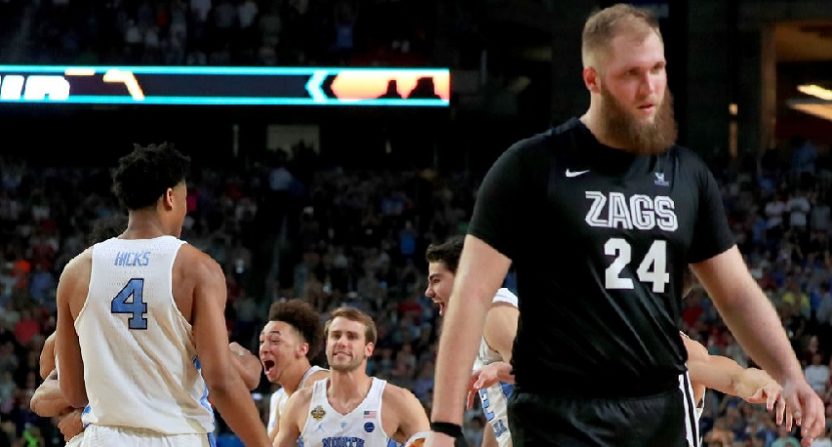 The Gonzaga Bulldogs have made the NCAA Tournament each year since 1999.

That first trip, an unlikely march to the Elite Eight as a 10-seed, put the school’s basketball program on the map. Since then, Gonzaga has tried to prove to America that run was no fluke.

You’d think that 17 straight NCAA bids afterward would’ve proven it. Or if not those, then the five Sweet 16 trips. Or another Elite Eight trip in 2015. They’ve won eight games as a lesser-seeded team this century. And then finally, this year, Gonzaga made the Final Four.

It still may not be enough.

But when you think about how they’ve gotten here, it certainly should be. Gonzaga’s program never should’ve gotten this far to begin with.

In Spokane, Washington, the Zags aren’t located in a hub of basketball talent. Washington’s far from a blue-chip heavy state, and the best kids are largely from the Seattle area. Being a smaller private school in a smaller private school conference can be a detriment. It clearly is for many of the other programs in the West Coast Conference, especially as they try to keep up with the Bulldogs.

Yet for Gonzaga, it’s working.

The Zags’ 2016 recruiting class was ranked among the top 15 nationally, according to 247Sports. But the talent which comprises that class (and the majority of the best players to head to Spokane) is untraditional.

Killian Tillie came over from France. Jacob Larsen is from Denmark. Poland, Japan and Denmark saw representation on this roster, too. Just one player on this year’s team (Rem Bakamus) was from Washington, and he was a walk-on.

This program, without the television contract, state dollars, elite facilities or heritage or glut of NBA alums, has no business going toe-to-toe with mighty North Carolina. But for a full 40 minutes on Monday night, they very much did.

There’s no shame in the loss. Just the somber realization that it could’ve been a win. The missed out-of-bounds call on the Heels’ Kennedy Meeks was one of several mistakes by the game’s team of referees. However, amidst a glut of whistles in the second half, there were plenty of erroneous whistles to go around. You can’t just lean on that as THE reason for a loss.

The real reason was simple: Carolina, loaded with five-stars and every resource imaginable, simply had too much talent and depth.

And yet they still had to battle the Zags for 40 straight minutes.

Both teams shot miserably from the floor all night. UNC was barely above 35 percent, while Gonzaga didn’t even top 34 percent. And the Heels were also a miserable 4-of-27 from three. Those are the types of performances most programs can’t really withstand. But again, the depth and talent of North Carolina was ultimately what guided them to a very late victory.

With the foul trouble on both sides (five players had at least four fouls in the game), the advantages of their respective inside games were almost nullified. The questionable free-throw shooting also made hacking an effective strategy for each team. Gonzaga shot just 65 percent from the line, and UNC was even worse at just short of 58 percent.

Losing players to foul trouble only works when you have similarly talented players to back-fill, though. For North Carolina, Tony Bradley and Luke Maye could reasonably fill the shoes of Kennedy Meeks or Isaiah Hicks or Theo Pinson.

For Gonzaga, that list was a whole lot shorter.

Przmek Karnowski was a force in the middle with nine points and nine rebounds, but four fouls prevented him from being as physical as the game wore on. Zach Collins fouled out with nine points and seven boards of his own. Killian Tillie played 14 minutes of mop-up duty, but didn’t have the same effect. He’s only a freshman, after all – a freshman on Gonzaga, that is. Not a young player likely bound for the NBA within the next three-to-15 months.

That lack of capable depth was ultimately what killed Gonzaga. Though they shouldn’t be sorry about it. Just look around the WCC and try to find another team that can field a competitive starting five against UNC, let alone beat them.

St. Mary’s and BYU are annually the only other programs even sniffing the NCAA Tournament from Gonzaga’s league. The Gaels have made the Sweet 16 just once since the start of the 1960s. BYU has made it that far just three times in the same stretch.

In the aftermath of a close championship game defeat, there are no moral victories to glean. Gonzaga was unlikely to have searched for them in the minutes and hours after Monday’s loss. You know that UNC couldn’t find one after falling to Villanova in 2016 either. Only now might they be able to see how that defeat helped them this year.

Still, the Zags should conceivably have no business being here. The fact that they were proves how much they’ve accomplished in the last couple decades. Now the surprises are over. If they return to the Final Four in the future, they’ll already be part of that fraternity.

As many first-time Final Four participants have shown, getting there the first time isn’t the tough part. It’s finding your way back (and potentially winning it all) that’s the most difficult test of all. From here on, Gonzaga’s program will now be defined by what it does going forward, not what it didn’t achieve before.