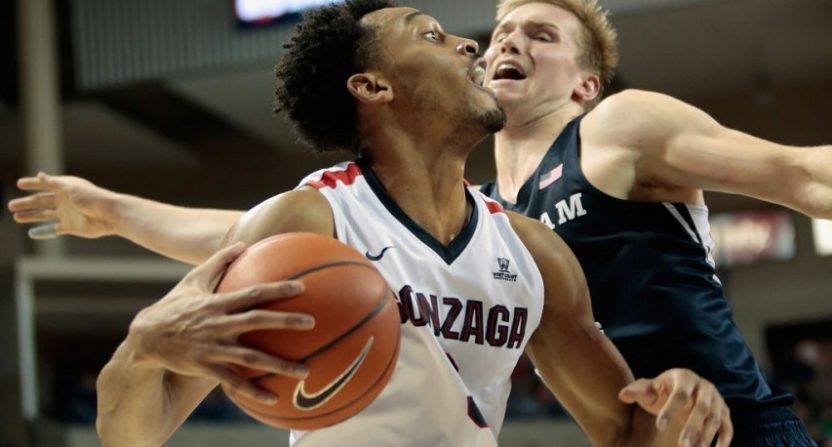 So much for the feel-good story of the NCAA basketball season. The Gonzaga Bulldogs’ quest for an undefeated season went bye-bye with a home loss to BYU on Saturday night. But, could that loss actually be the thing that helps Gonzaga to its ultimate goal — a national championship?

History certainly suggests that an undefeated regular season means very little come the postseason. After all, only eight teams have had a perfect regular season and gone on to win a national championship.

Further, there have been just 16 teams to go through the regular season undefeated in the postseason era. All of them were dropped in either the conference tournament, the NCAA tournament or actually ineligible for postseason play.

Entering the postseason undefeated is indeed a rare feat, something that has only been done once in the last 10 years when Wichita State went 35-0 before losing to Kentucky in the second round of the NCAA Tournament.

It just so happens that the Shockers could also be the perfect model for why Gonzaga’s late-season loss actually may be a good thing. And the 2004 St. Joseph’s team went undefeated in the regular season before them. They went on to a No. 1 seed in the East region and made it all the way to the Elite 8 before losing by two points to Oklahoma State.

The pressure of an undefeated season and all the talk surrounding such a feat is immense. It only would get worse with the national spotlight of the NCAA tournament upon a team like Gonzaga.

Losing late on a Saturday night while most of America was likely unaware of what was happening in Spokane means the pressure of immense national attention is off this team.

There’s also the fact that the Zags haven’t really played many close games on the season. Sure, they lost this one close game, but even a loss can be a learning opportunity and learning how to operate and pull out a close game can come from a loss like this — even late in the season.

It also seems as if this one late-season loss puts to shame a team that has one of the better non-conference resumes in the country. This is still the same team that owns wins over Florida, Iowa State and Arizona out of West Coast Conference play.

Most teams would love to have those wins on their non-conference resumes, but Gonzaga is the only one. Clearly, this is a team capable of playing and beating anyone in the country. One loss doesn’t change that.

Gonzaga, much like St. Joseph’s in 2004, has played well enough this season to earn a No. 1 seed in the NCAA tournament as long as it doesn’t get dropped early in the West Coast Conference tournament.

For a team like Gonzaga or other high level programs playing in so-called mid major conferences, getting a No. 1 seed is the ultimate boost towards the Final Four.  It means no fighting with top teams until the last possible moments, if at all.

There’s no second-day matchup with a top 4 seed in your region, instead the Zags could be facing a No. 8 or No. 9 seed that they theoretically could deal well with as long as they don’t get a terrible luck of the draw like the Shockers got in 2014 playing an incredibly talented Kentucky team.

That kind of personal pressure is good, the external kind is not so good. That’s why the Zags may indeed have a better chance of reaching the ultimate goal than it would’ve had they just gone in to the tournament without a loss.

Just as UNLV of the 1990-91 season, who went undefeated all the way to the Final Four only to lose in the national semi-final against Duke. Do you think the Runnin’ Rebels would’ve traded one regular season loss for a win over the Blue Devils and a shot at another national championship?

25 years later and the guys on that team still are “heartbroken” over the loss to the Blue Devils, so we’re going to guess the answer is yes.

We’re guessing the answer is yes, and as long as the BYU loss isn’t the start of a huge slide backwards, the Zags may be in prime position to get to the promised land of a national championship.