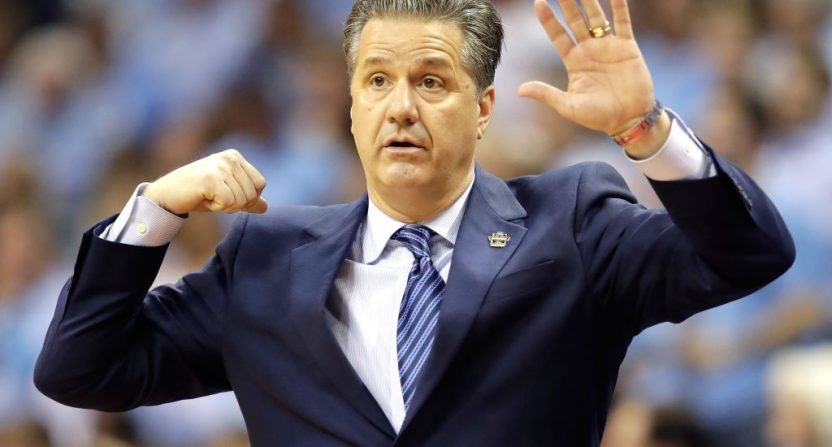 The NBA’s one-and-done rule has been around for more than a decade now, and it’s likely not going anywhere. In fact, any change seems much more likely to increase the age required for NBA participation. And no one in college basketball has done a better job capitalizing on the rule than Kentucky coach John Calipari; he even scored a 30 for 30 titled One and Not Done on the back of his success with the Wildcats. Now, though, a wrinkle to the rule could end up costing Calipari a top-rated recruit next fall.

The player in question is Hamidou Diallo, a top recruit who actually graduated high school early last spring, enrolled at Kentucky in January, and has been practicing against the Wildcats’ varsity team for the last few months. He turns 19 in July and graduated high school over a year ago, which means he’s actually eligible for the 2017 NBA Draft (in a similar loophole to what Bucks’ rookie Thon Maker used last year), and he’s declared for it while not retaining an agent. That means he can still pull his name out prior to the May 24th deadline and return to Kentucky, where he’d play his first minutes this fall.

That’s a fairly low-risk situation for Diallo; either he gets good feedback and feels comfortable turning pro now, or he learns a bit about what he needs to do to improve in the eyes of NBA scouts, and returns to play for the coach perhaps best-suited for preparing a player of his caliber for the professional ranks. It’s an odd situation, though, and further illustrates that while on the surface the one-and-done rule has helped improve the overall talent level in college basketball, it’s also, at its core, exploitative of the sport.

Calipari has built a career on appealing to high-level pro prospects, and when you swim in those recruiting waters, you take risks like this one. Calipari acknowledged the situation, and at least publicly, maintained the stance you’d expect:

“With the information that will be available to Hami and the feedback he will receive by going through this process, I fully support his decision,” Calipari said. “It’s in Hami’s best interests to evaluate if now is his time or if he would be better served returning to school. Whatever Hami ultimately chooses to do, you’re talking about an athletic guard with great ball skills, an unbelievable finisher and a terrific defender. He’s gotten so much better in his four months with us and he’s only going to continue to get better.”

That’s a fairly enlightened view, and whatever you think of John Calipari, it’s becoming more and more apparent that he’s at the very least honest about wanting to send his players to the pros. He’s positioned himself to gain when they leave early; it’s an investment in the future of recruiting, at the expense of losing a few high-level prospects who may have considered playing a second year had he put on the full-court press for their return. Or a first year in the case of Diallo. But Calipari’s openness to letting him go may pay off with other recruits down the road.

Whatever Diallo decides to do, it’s hard to argue that he’s in the wrong place for someone facing this exact decision.