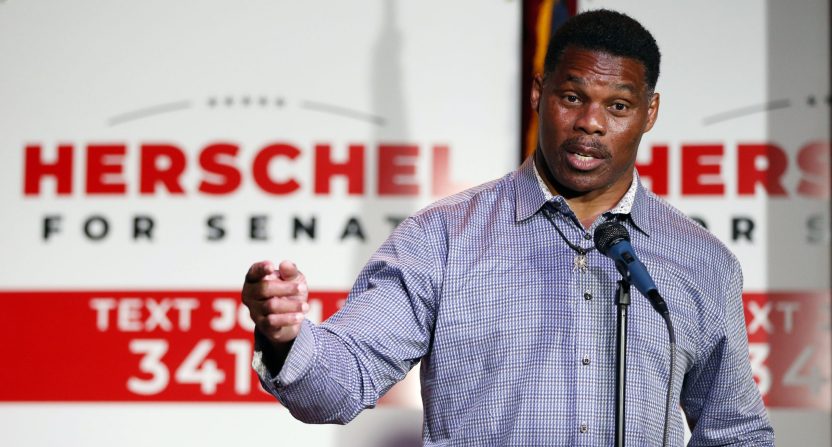 America remains locked in a tough conversation on what to do about gun violence and how to protect children. While some people are putting forward absurd ideas as distractions, others seem to understand the most logical solution.

And then there’s Herschel Walker, the Republican nominee for one of Georgia’s U.S. Senate seats. During a recent appearance on Fox News, the iconic Georgia Bulldogs football legend was asked about his thoughts on how to solve the issue.

“Cain killed Abel and that’s a problem that we have,” said Walker. “What we need to do is look into how we can stop those things. You know, you talked about doing a disinformation — what about getting a department that can look at young men that’s looking at women that’s looking at their social media. What about doing that? Looking into things like that and we can stop that that way. But yet they want to just continue to talk about taking away your constitutional rights. And I think there’s more things we need to look into. This has been happening for years and the way we stop it is putting money into the mental health field, by putting money into other departments rather than departments that want to take away your rights.”

Walker sure said a lot of words but it’s hard to understand exactly what he’s proposing in that word salad.

While there are plenty f reactions from around the political world to Walker’s comments, the sports world certainly took notice as well.

If Herschel Walker's senator candidacy hasn't been stopped before, today is the day.

This is beyond brutal. https://t.co/S4dkQ1MOdj

There is something very wrong with Herschel Walker. https://t.co/lCzMFcfe43

As a lib, I must admit I would feel very owned if Herschel showed up for a verbal battle of rhetorical skills against his election opponent, Raphael Warnock, literally the successor to MLK's pulpit. Nooo, please don't do it Herschel, even though it would be tremendous content https://t.co/2iCzUInFhp

Herschel Walker is a straight up Dumb ass… Anyone voting for him is worse. https://t.co/Whqd24qb8C

Herschel Walker can't even string a coherent thought together, yet a lot of people are going to vote for him to be a United States Senator solely to "own the libs." This country is so broken. https://t.co/xhJeiDnC7I

Walker, who also recently claimed that Donald Trump has never said the 2020 election was stolen, candidly discussed his own issues with dissociative identity disorder, or DID, in the past. While Walker has not been diagnosed with CTE (Chronic Traumatic Encephalopathy), certain events in his life, including admitting to playing Russian Roulette and alleged domestic abuse, have many wondering if he should be a member of the United States Congress.