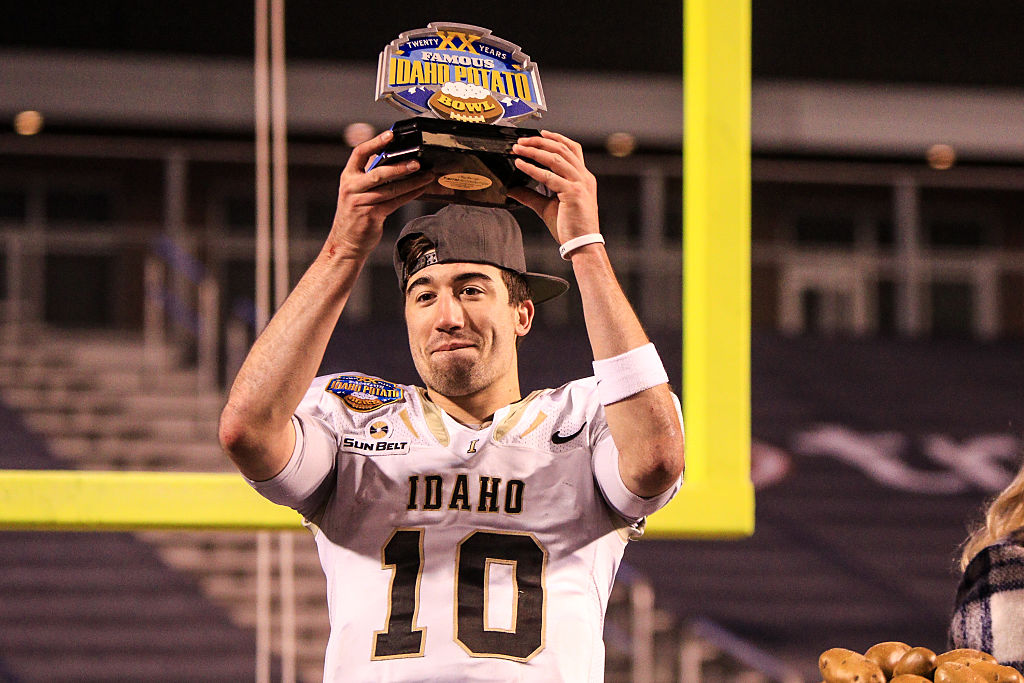 If this was a disaster movie and a hurricane, typhoon, snow storm, or band of aliens was coming into the town and everyone was on the highway feverishly trying to go one way, and then another van full of people going the other way was the only car on the road, Idaho would be the van.

As of  last spring when the Sun Belt told Idaho and New Mexico State to take a hike so they could revenue-share among 10 teams instead of 12, the Vandals became college football vagrants looking for a couch to sleep on.

The options? Become an independent and make your own schedule in FBS, hoping eventually someone would call you up and offer you a studio apartment in their conference, or go FCS — specifically, the Big Sky, with whom they were a charter member back in 1963.

And with that, Idaho chose to become the first FBS team to voluntarily drop back a division.

So 2017 becomes Idaho’s football’s Gethsemane of sorts and if you read any analysis on it, it’s mostly DOOM. Don’t get sucked into thinking that’s the only narrative.

The negatives are immense. Revenue will be lost from being a part of the FBS and getting a (small) chunk of the CFB Playoff pie. The Sun Belt doesn’t boast a massive television contract, but it’s larger than that of the Big Sky. They’ll lose those funds, too.

Then there’s the issue of scholarships, where the Vandals will lose 22 to give out (reduced from 85 to 63) by dropping down a level. That’s a disappointing reality, especially for local high school football players who otherwise might not have the chance to play at the collegiate level.

Add all of that indignity to the fact that this comes at a time when there’s as much buzz around the Vandals’ program as there’s been since they actually joined FBS back in 1996, and man, there just looks like no hope.

But that 9-4 breakthrough 2016 season is only the Vandals’ fourth winning campaign since joining the FBS ranks, and only the second since 2000. All of this has come at the same time as watching state rival Boise State suck up literally all the national oxygen between state lines en route to astounding success and national branding.

Since both joined the highest level of football, the two programs have been on totally divergent paths, like giving your kids each half of your estate and one goes off and quadruples it with savvy real estate deals and the other blows it all at the casino the following week.

So wait — when are we getting to the positives?

It may take some time and some pain in the process, but the Vandals will be hits at a burgeoning FCS movement party. The division has done some smart things, namely having a college football game televised the week before FBS starts, when football fans are scratching and clawing for any meaningful live game action. And people like their playoff format, even if it’s not a sustainable model at the FBS level.

Last season, North Dakota State and South Dakota State played in the FCS Semis, drawing the largest-ever rating for an FCS game . The FCS’ most visible program, NDSU broke its own personal viewing record in 2015 during a game with Northern Iowa.

The point is, more people are watching FCS football now than ever, even if television ratings for FCS games aren’t widely reported.

And the Vandals’ might be in a position to capitalize on that rapid growth in a grand way. The Big Sky is one of the most visible conferences in FCS and quite frankly, Idaho’s history suggests they’ll be in plenty of playoff hunts.

In their previous FCS (D1-AA at the time) stint, the Vandals made the playoffs 11 times in their 18 years and made the national semifinals twice. Considering the FCS semis were viewed more than their bowl win last season, people are obviously open to watching. And the best way to get knowledge of your program out there is to win and get on television.

Paul Petrino has built good things in Moscow and those should carry over, especially during the process where the Vandals ration down to those 63 scholarships. And Idaho has been a breeding ground over the years for good up-and-coming coaches, guys who made splashes in the FBS ranks like Dennis Erickson and John L. Smith.

They return one of the more intriguing quarterbacks in the nation whom you’ve probably never heard of in Matt Linehan. He was MVP of the Famous Idaho Potato Bowl last season in a win over Mountain West favorite Colorado State.

And you could go down the line of players returning that suggest it’ll be another near nine-win season for the Vandals before they get back together with their old flame, the FCS. It’s finally a great time to be a Vandals fan, right as big changes are coming.

To make a long story short, though, if you can rack up nine wins at the FBS level, you’re more than capable of competing annually in the FCS playoff jamboree.

Sometimes in life, you have to downsize your house to get out of some financial ruin, downsize your car because of job loss, heck, even downsize your job if it’ll make you healthy, only slightly less wealthy, happy, and wise.

Better days are ahead for the Idaho Vandals and their football program and in the end, maybe a step down will end up being a step up.