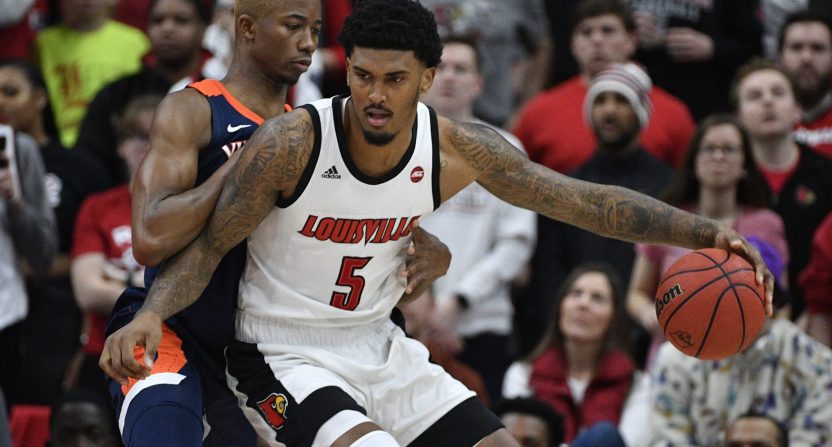 No one’s great, but several teams are pretty good. That’s the narrative driving the 2019-20 college basketball season. A dominant force has yet to emerge.

It seems like the NCAA Tournament will be as wide open as it has ever been. Several schools can claim “Why not us?” Among them, the University of Louisville.

Two years ago, the NCAA forced the Louisville to vacate its 2013 national championship. In a short of amount of time, Louisville might be on the precipice of putting up another title banner they hope to hang permanently at the KFC Yum! Center.

In a topsy-turvy season, No. 5 Louisville (21-3, 12-1 in the ACC) has as good a shot as anyone at winning it all. Credit Chris Mack, who in just his second season, is doing things that Rick Pitino never did at Louisville. The Cardinals are off to their best start since 1982-83, and have won 10 straight conference games for the first time since that Final Four season.

You want consistency? Louisville, No. 5 in the preseason top-25, has been ranked as high as No. 1 and hasn’t been lower than No. 13. Louisville doesn’t have a bad loss. The Cardinals’ defeats are against teams currently ranked: No. 8 Florida State, No. 12 Kentucky, and No. 24 Texas Tech.

Louisville is in contention for an NCAA tournament No. 1 seed. The Cardinals are No. 7 in the NCAA committee’s top 16 overall seeds and No.7 in the NET rankings. Baylor, Kansas, Gonzaga, and San Diego State are leading in the race for the No. 1 seeds, but if any slip up – particularly the latter two – the Cardinals could snag a No. 1 seed.

The last time that happened, the Cardinals won it all in Atlanta. Guess where the Final Four is this year? Yep, at Atlanta. You can see the stars aligning if you want to, but there’s still a lot of basketball to be played. However, without a dominant team, the door appears wide-open for a team to grab the title.

Mack hasn’t been at Louisville long, but he has already built a team that is court savvy.

“I’ve got older guys that have been through it and they recognize what is happening on the floor,” he said. “They have belief in one another. They’re all in. Bottom line, it’s their team. They’re going to be remembered.”

This is a welcome relief for a program that was on uncertain ground after the university fired Pitino in 2017 following the FBI basketball corruption investigation. It’s still probation and there’s still the possibility of penalties stemming from the NCAA’s own investigation.

But for now, the games go on.

Mack is on the short list of best coaches without a national championship. He had success in nine seasons at Xavier, but only got as far as the 2017 Elite Eight. In his first season at Louisville last year, he brought some much-needed stability to a program on NCAA probation.

But now, the Cardinals have a team built on veteran players (five seniors, four juniors), a National Player of the Year candidate in forward Jordan Nwora, and a terrific offense (seventh in offensive efficiency). Last weekend was a great example of Louisville’s growth, with an 80-73 win — and 51% shooting from the floor — over defending national champion Virginia. The 80 points are the most given up by the defensive-minded Cavaliers this season.

“It’s just a multi-faceted team that when you can score in different ways, play in different styles that makes you effective,” Virginia coach Tony Bennett said.

In ACC play, the Cardinals are shooting 44.9 percent from three-point range. That’s by far the best in the league. And their 9.5 treys made per game is second-best.

“We got some weapons,” Louisville junior forward Malik Williams said. “When we share the ball and play together, we’re a scary team.”

Defensively, the Cardinals are strong as well. They’re 12th in the nation in field goal percentage allowed (37.9).

The ACC is down this season. There’s a possibility that only three or four teams will get NCAA bids. But Louisville doesn’t have to apologize to anyone. The Cardinals have won at Duke and beaten Michigan. With seven games left in the regular season, they will have chances for quality wins at Florida State and at Virginia.

However, in order to secure a No. 1 seed, Louisville can’t afford more than a few losses. Ken Pomeroy projects that the Cardinals will go 6-1 to close out the regular-season stretch, with the lone loss at Florida State. With a good showing in the ACC tournament, that could be enough to be a No. 1 seed.

That will be key as Louisville pursues a banner the NCAA can’t take away.