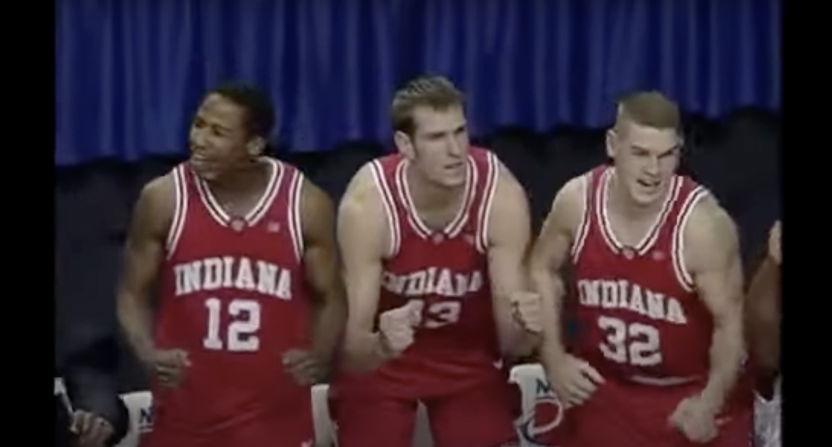 When it comes to old-school Indiana University hangouts, you don’t get any more hardcore than Nick’s English Hut. Established in 1929, the Bloomington institution is the place to be for the heartiest of Hoosiers. The pub’s walls are covered with photos and memorabilia of great athletes and great moments in Indiana sports history.

Tucked away in an upstairs corner is an old framed copy of the Indianapolis Star. The headline on the weathered newspaper reads: “On the brink” in recognition of the Hoosiers advancing to the 2002 National Championship Game. Most of the patrons on this day were babies the last time Indiana played for a title. Almost all of them weren’t even alive when the Hoosiers won the whole damn thing.

Twenty years ago—April Fool’s Day 2002—Indiana almost pulled off a shocking run. If the Hoosiers had closed the deal, the basketball program might look very different than it does today.

The 2001-02 Hoosiers were not a great team. They entered the NCAA tournament with 11 losses and were 7-5 before starting conference play. Yes, they won the Big Ten, but shared the crown with an 11-5 record along with Wisconsin and Illinois. Indiana had one NBA player (hometown hero Jared Jeffries). The squad from the previous year had two (Jeffries AND Kirk Haston).

But the 2000-01 Hoosiers were in turmoil before that season even started due to the September firing of Bob Knight. Interim coach Mike Davis managed to pull that team together to salvage the season and was rewarded with the permanent job.

However, many Indiana fans were reluctant to give Davis credit. In many people’s eyes, he was always looked at as a temporary solution. He was the Accidental Coach who landed a pristine post only because the legendary but volatile Knight couldn’t behave himself and was axed after violating the zero-tolerance policy he was working under.

But it was Davis who started Tom Coverdale at point guard. The former Indiana Mr. Basketball had been languishing on the bench under Knight. Also, it was Davis who recruited Jeffries, who despite being raised in Bloomington, didn’t grow up as an Indiana fan. (At his press conference, announcing that he would be a Hoosier, he committed the faux pas of calling IU “the University of Indiana”).

In 2001-02, free of the interim label, Davis built an offense around a three-guard lineup of Coverdale, Dane Fife, and Kyle Hornsby. The defense was stout with Jeffries on the inside and Fife on the perimeter. Later, he moved Jarrad Odle into the starting lineup and made Jeff Newton a key reserve.

After an inconsistent non-conference slate which included last-second losses to Marquette and Butler, Indiana found its groove and earned a No.5 seed for the NCAA Tournament. It won its opener against Utah and then caught a huge break when UNC Wilmington upset USC. After winning that second-round matchup, the Hoosiers advanced to the Sweet 16.

One problem. Up next was defending national champion Duke.

The top-seed and top-ranked Blue Devils were loaded. All five of their starters were future NBA players, three were first-round picks, led by national player of the year Jay Williams. It was one of the most talented teams of Mike Krzyzewski’s storied career.

No way Indiana could compete, right? Duke was favored to win by 13 points. Well, strange things happen in the NCAA Tournament. Before the game, the Indiana coaching staff had the players watch Buster Douglas’ upset of Mike Tyson, and these Hoosiers believed they had a puncher’s chance.

Everything looked dire when Indiana fell behind by 17 points but the Hoosiers chipped away and took a late lead. The highlight of their tenacity was 6-foot-4 A.J. Moye blocking 6-9 Carlos Boozer.

Indiana faced disaster when Fife fouled Williams on a made 3-point basket, with Duke pulling the score to 74-73 with 4.2 seconds left off the three. But Williams missed the free throw. Boozer got the rebound but his put-back try missed. Newton snared the rebound as the buzzer sounded and the celebration was on.

The party continued when the Hoosiers avenged a 2001 tournament loss by beating Kent State behind 15-of-19 3-point shooting to reach the Final Four for the first time since 1992. A program once in disarray was back to national prominence. A fan base that had been divided by Knight’s ouster was unified again.

Indiana reached the National Championship Game after defeating Oklahoma. It would take another miracle to topple Maryland. The Terrapins were the Atlantic Coast Conference regular-season champs and had a stocked roster with four future NBA players, led by Juan Dixon.

The magic ran out on the Hoosiers. They hung tough for a while, but the offense went dead in the second half, and they fell 64-52. The outcome might have been different if not for Coverdale being hobbled by an ankle sprain.

A disappointing end to a miraculous season. However, the future seemed bright. That’s not what happened. By 2005-06, with the program unable to recapture that magic, Davis resigned under pressure. In hindsight, you have to wonder what might have happened if Indiana had won the 2002 National Championship.

Perhaps the fan base would have been more patient. Perhaps Davis might have landed another Bloomington high schooler: Sean May. The son of Hoosier great Scott May stunned everyone by choosing North Carolina over Indiana. May went on to lead the Tar Heels to the 2005 NCAA title. Perhaps Kelvin Sampson is never hired to replace Davis, and the Hoosiers don’t wind up on probation.

We’ll never know. What we do know is that Indiana hasn’t been back to the Final Four since. Of all the blueblood basketball programs, no one has a longer championship drought than the Hoosiers. They haven’t won it all since 1987.

Until Indiana returns to glory, the patrons at Nick’s will continue to celebrate a past that keeps fading further and further into the distance.