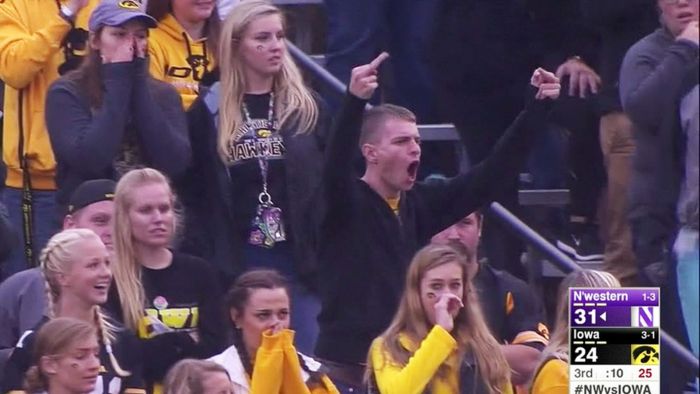 The 3-1 Iowa Hawkeyes entered Saturday’s home game against the 1-3 Northwestern Wildcats as significant favorites and led 21-17 at the half, but the second half didn’t go well for them. That led to fans throwing bottles onto the field and flipping off the officials.

Northwestern came out fired up after the break and led 31-24 near the end of the third quarter. With 10 seconds left in the quarter, some Iowa fans at Kinnick Stadium took their displeasure over a facemask call against the Hawkeyes to a new level, flipping off the officials and throwing bottles on the field in protest. Here’s a GIF of the extended middle fingers from SB Nation’s James Dator:

Here are some tweets on the thrown bottles from Sam Brief, a reporter who was on the sidelines:

Some of the bottles thrown onto the field by Iowa fans. One almost hit me…they're not a happy group right now, to say the least. pic.twitter.com/Yc1m0kuJK3

Surreal scene in Iowa City. Fans going berserk at the refs, throwing bottles on field. PA had to send a warning out. pic.twitter.com/PTOTKGCG4B

Plenty of people went after Iowa fans on Twitter after this:

NU's last two true B1G road games: Pelted by snowballs in Madison and pelted by bottles in Iowa City. I would expect no less.

Keepin' it classy, Iowa fans. You're getting shafted by a couple terrible calls no doubt but throwing glass bottles on the field? #NUvsIOWA

Cedar Rapids Gazette sportswriter Marc Morehouse commented on how unusual this was:

Been doing this here at Kinnick for 20 years. I've never seen stuff thrown on the field. OK, there was a pig's head that one time.

Even some Iowa fans were unhappy with their fellow partisans:

I'm an #IowaHawkeyes fan and yes the refs are blind but throwing bottles on the field is just embarrassing. Keep it classy. #hawkeyes #iowa

That’s not a good look for the Iowa fans who threw bottles. They’re obviously not representative of the whole fan base, but they hurt their team with penalties and created a dangerous situation. Still, it’s understandable to be mad about calls and frustrated about losing a home game to a 1-3 Northwestern team that had already lost to FCS Illinois State. As Northwestern blog Bring Your Champions, They’re Our Meat wrote in a rather prescient piece ahead of this one, a Northwestern upset was likely to cause problems:

Still, Iowa can afford to worry about style points when they are 3-1 and facing a struggling version of a team they mangled last year on the road.  They will be heavily favored, and Northwestern will have to find another gear that they’ve lacked all season to pull off the upset.  On the other hand, the Wildcats have played poorly enough that an improbable victory would cause Iowa City to collapse into a paroxysm of complaints about uncalled holding penalties, a grand Pynchonian conspiracy of holding calls dating back to a medieval society of holders called Societatis Capto who have melted into American society, becoming government officials and heads of companies who hide their secret veneration of holding in the texts of plays and radio shows and psychedelic rock music and the entire art of football refereeing, which on this Saturday and only this Saturday, results in a free for all of uncalled holding penalties and you can tell all of this is going on when all of the officials have names like Oblong Whistlelung, Steak Ligament, and Flesh Harbaugh.

…The Wildcats have their work cut out for them against Iowa on Saturday.  Perhaps the defense can find some of its 2015 form in time to slow an Iowa rushing attack.  Maybe Thorson and Carr can continue to add some life to Northwestern’s passing attack.  Perhaps Northwestern has been holding back this entire time, like a hypothetical nineteenth-century swordsman only trying to provoke the Hawkeyes into a duel and then revealing themselves as expert football men and then it will be too late for Iowa, stunned by a fancy passing attack and ferocious defense and dozens of impossible field goals.  Even a struggling Northwestern team is due for a ridiculous upset every season.

They were indeed, and Iowa fans were not pleased about being on the other end of it.