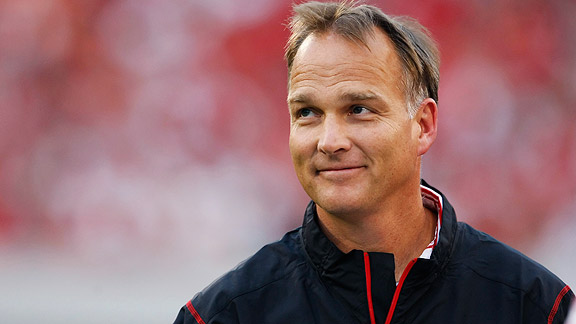 A program-best winning percentage of .745 wasn’t good enough. Neither were five SEC title game appearances in 15 years nor the fact that he ranks second in school history with 145 career victories (to say nothing of the idea that he was the best off-the-field representative that a big-time football factory possibly could have).

And so, Georgia football coach Mark Richt was fired Sunday. Meanwhile, 600 miles to the southwest, LSU coach Les Miles (a winning percentage of 78 percent, two SEC championship victories and a national title in a nine-year span) was saved from the same fate at the last minute. All of it led Alabama’s Nick Saban — one who seems to have little sympathy for anybody or anything — to lament, “I don’t know what the world is coming to in our profession … I hate to see these kinds of things.”

You know who else might hate to see these kinds of things? Georgia fans in three years when their new head coach — reportedly Alabama defensive coordinator and Georgia alum Kirby Smart — fails to live up to the mighty expectations the alumni maintain no matter what.

(As an aside, I covered Jim Donnan’s final press conference after he was fired, and I remember thinking to myself, “This dude just went 39-19 in five years at Georgia, and now, he’s getting fired. What is this world coming to?” But what did I know? After firing Donnan, Georgia hired Richt, so maybe firing Richt will eventually be the right move.) 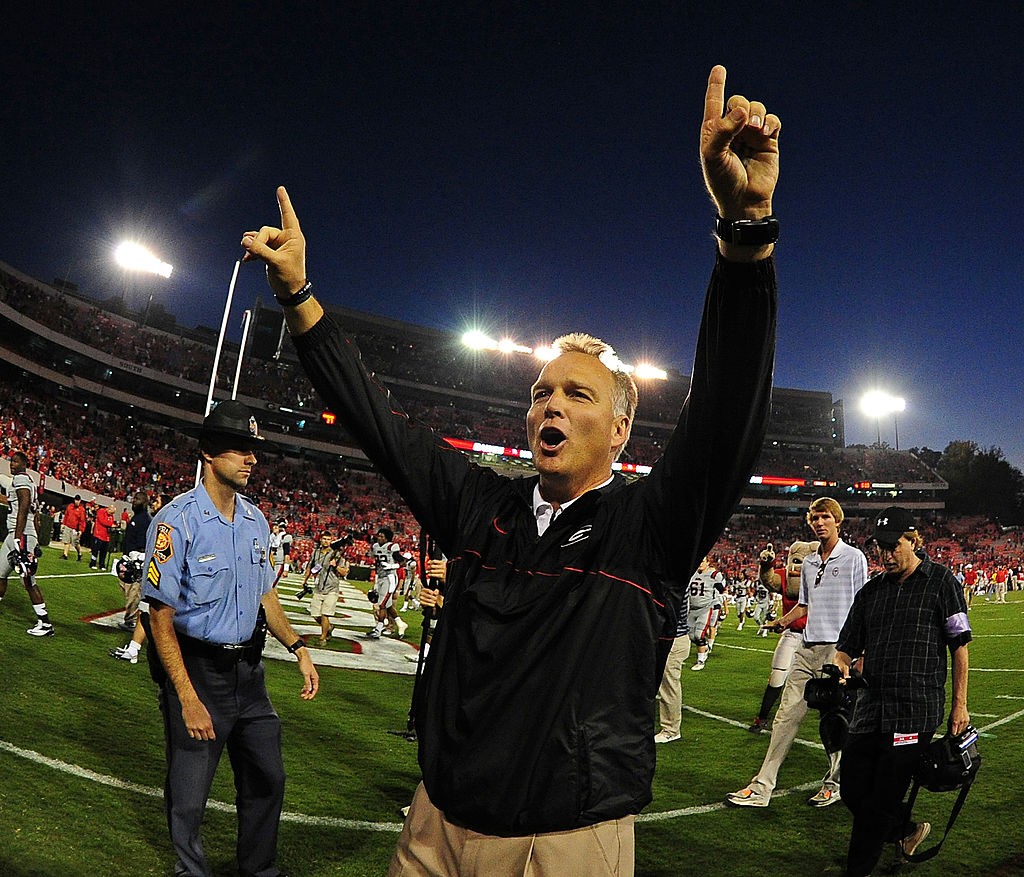 But it’s not just Georgia who rids itself of a successful coach. It’s everybody. Because every college football fanbase overrates its program and thinks its administration could convince the top coaches in the country to drop everything and rush to campus to beg for the job. For 99 percent of teams, though, this is a fallacy. It wasn’t true at Texas (Charlie Strong certainly wasn’t the Longhorns’ top choice). It wasn’t true at Tennessee (we’ll get to the Volunteers in a second). It wasn’t even true at Notre Dame (remember, the Fighting Irish went after Urban Meyer twice and were rejected both times).

So, let’s take a look at what’s happened at a number of schools when they fired (or forced a resignation out of) an ultra-successful head coach. It’s worth looking to the past to see if getting rid of a winning coach is the right move for the future.

Why: He was never going to step out of the shadows of Robert Neyland, who won four national titles for the Volunteers between 1938-51 — especially since Fulmer worked inside a stadium named for Neyland. Tennessee tired of Fulmer after 17 years, despite his .745 winning percentage, two SEC titles and one national championship, mostly because the Volunteers couldn’t keep pace with the Steve Spurrier-led Florida Gators — remember this devastating line from Spurrier? That was enough to push him out. Said former running back Gerald Riggs Jr.: “[Fulmer has] been there a long time and has done a lot of great things. But lately you could see they weren’t getting any better. You can’t put your finger on it. But with the amount of talent they supposedly have, they have to be better.”

What happened post-Fulmer: It’s been nothing short of a disaster in Knoxville. Then-AD Mike Hamilton hired Lane Kiffin — who stayed for one season, went 7-6, and then abandoned the program to being a mediocre reign as USC’s head coach. That led to Tennessee hiring Derek Dooley, who went 15-21 (the worst record of any Tennessee coach in a century) before landing Butch Jones. But the worst part might be Tennessee’s new way of thinking. Jones has gone 20-17 since 2013. His reward: a two-year contract extension worth $3.6 million per season.

Did Fulmer coach again and rub Tennessee’s face in it?: No.

So, was firing Fulmer the right move?: It probably was. The Volunteers were in the midst of a 3-7 season, and the program likely needed a change. But Tennessee’s decision-making has been horrendous since, and this is the classic case of a fanbase overrating its own coaching job (when Derek Dooley is the best you can do, that’s not exactly a sign that your job is in high demand). In retrospect, maybe Fulmer could have turned around his own program.

Why: Um, because of this.

It doesn’t really matter if Hayes was the winningest coach in Buckeyes history — his 205 victories might never be topped at Ohio State — and it doesn’t matter if he won 76.1 percent of his games and five national titles. You punch another team’s player in the throat, and you’re probably going to get canned.

It might have been time for Hayes to walk away at that point, anyway. He had coached at Ohio State for 27 years, and the team had lost four of its past five bowl games. As the Associated Press wrote at the time, “He destroyed himself with his own uncontrollable temper.” It was a staggering fall for one of the best coaches in college football history.

What happened post-Hayes: Ohio State never fell from power. Earle Bruce and John Cooper had solid tenures, winning a couple handfuls of conference titles, and Jim Tressel won 81 percent of his games with a national title. That paved the way for Urban Meyer, who’s lost only four times since he was hired before the 2012 season.

Did Hayes coach again and rub Ohio State’s face in it?: No. Punching a player in the throat doesn’t look great on a resume.

So, was firing Hayes the right move?: Absolutely. Ohio State, except for a few bumps here and there, didn’t lose its elite status, and now, the Buckeyes are better than they’ve ever been before.

Why: In the previous 36 years before Solich took over the Cornhuskers program, only two head coaches prowled the Nebraska sidelines: Bob Devaney and Tom Osborne, who combined for winning percentage of .828 and won five combined national titles. When Solich could only manage to win a pedestrian 75 percent of his games with one conference championship in six years, it clearly was time to move on to somebody else. Said then-athletic director Steve Pederson: “This is the best job in the country … I believe we should be playing for or gaining on the championship on a consistent basis. I don’t feel that currently we are playing for or gaining on the championship.”

What happened post-Solich: Well, Nebraska certainly isn’t the best job in the country anymore, mostly because the program descended into mediocrity. Though Bo Pelini did good work in Lincoln, winning 71 percent of his games before he was fired in 2014, Nebraska hasn’t won a conference title since 1999. In his first season, coach Mike Riley went 5-7 this year.

Did Solich coach again and rub Nebraska’s face in it?: Sort of. Solich was hired at Ohio University, and he’s gone 80-60. He led the Bobcats to their first bowl win and into the top-25 poll for the first time in decades. But are Cornhuskers fans looking at those results and pining for Solich to return? It’s doubtful.

So, was the firing Solich the right move?: At the time, Pederson said he didn’t want to see the program slip into mediocrity. It’s done exactly that since Solich departed. That might or might not have occurred if Solich stayed. But have the Cornhuskers hired a better coach than Solich since letting him go? The answer is no.

Why: Even with a .672 winning percentage — which, at the time, seemed perfectly reasonable and was, in, fact, the third-best percentage in school history — then-Bulldogs athletic director (and legendary former coach) Vince Dooley thought the school wouldn’t win a national title with Donnan in charge. Plus, against Georgia’s four biggest rivals (Florida, Tennessee, Auburn and Georgia Tech) Donnan’s record was a subpar 6-14. “It’s something we can’t ignore,” Dooley said at the time. “Suppose we had a winning record against all four of those teams. Would we be here? The fact of the matter is we would not be here if that was the case.”

Did Donnan coach again and rub his Georgia’s face in it?: No, but in 2014, he was acquitted of all 41 charges against him of running a fraudulent investment scheme. High fives all around for him.

So, was the firing Donnan the right move?: An unequivocal yes.

Why: From 1979-2006, the Hurricanes had an amazing run of coaches. Howard Schnellenberger, Jimmy Johnson, Dennis Erickson, Butch Davis and Coker combined for a .795 winning percentage. Coker was no slouch, going 60-15 (.800) for his six seasons in charge and won a national title in his first season, but in 2006, the year was, as the New York Times wrote, “an uneven season marred by tumult on and off the field.” But does going 7-6 in one season erase the 53-9 from the previous years? Apparently so.

What happened post-Coker: An absolute freefall. Miami was hit hard by allegations of improper booster benefits that led to the words “death penalty” being thrown around (Coker said he wasn’t aware of anything amiss). For his part, then-AD Paul Dee said he was disappointed with the direction Coker had taken the program. If that’s the case, the fanbase is probably real disappointed in the job done by Randy Shannon and Al Golden, who combined to win only 56.1 percent of their games before they were fired in 2010 and 2015, respectively.

Did Coker coach again and rub Miami’s face in it?: Yes, and not exactly. In 2011, Coker became the founding coach of the Texas-San Antonio program, and the team has struggled in its first five seasons. Particularly in 2014 and 2015 when the Roadrunners went a combined 7-17.

So, was firing Coker the right move?: If you look at the mess Miami has been in ever since, it’s hard to say this was a great strategy, because the Hurricanes were an elite team that might have had one bad season. Since then, they’ve become a mediocre program.

But always remember this: college football is a flat circle. On Tuesday, a number of media outlets reported that Miami was in the process of hiring the coach to replace Golden. His name is Mark Richt.