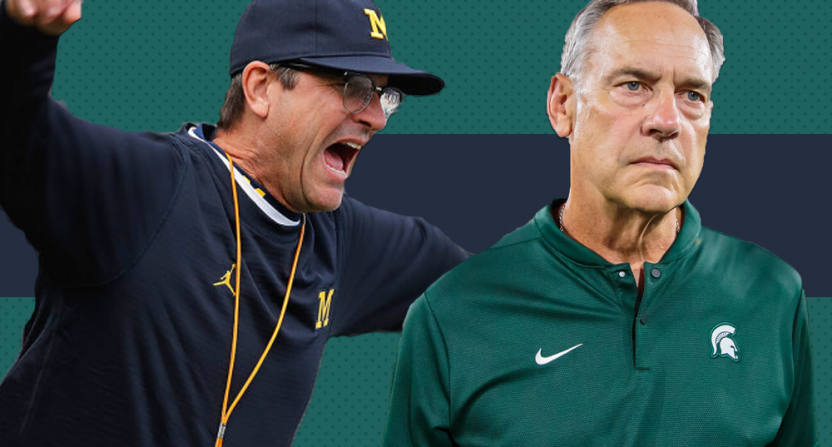 Jim Harbaugh has got a pretty good thing going at Michigan right now. While he hasn’t turned all the hype, pomp, and circumstance into a national title yet, he has returned the Wolverines to the top of the food chain in college football. UM is currently No. 5 in the country with a 7-1 record and is coming off a big win over in-state rival Michigan State in East Lansing. The Wolverines control their own destiny to the Big Ten Championship and can put themselves in a great position for a College Football Playoff bid. Life is great!

However, that’s not what Jim Harbaugh seems to be focused on. It’s what happened before that rivalry game that still has Harbaugh’s ham really steamed.

There are conflicting videos and reports but here’s what we know happened on Saturday. Michigan State entered their stadium around two hours before kickoff. As they do before every game, the players put on their helmets and walked with arms locked across the length of the field. It just so happened that some Michigan players were working out on the field at the time and refused to make room for the Spartans. That lead to MSU players clotheslining UM’s Lawrence Marshall and ripping the headphones off of UM’s Lavert Hill. That made UM captain Devin Bush, Jr. go to midfield where he promptly ripped out large chunks of the Michigan State logo in defiance.

You can chalk this up a few different ways. You could say that the UM players knew Michigan State’s players were going to do this and brought the whole thing on themselves. You can point to the fact that the MSU players were later than the agreed-upon time and should have been prompter in their tradition. You could also acknowledge that both sides could have been more adult in how they handled the situation.

Of course, all of that is nonsense because we all know what happens when two rival football teams share a space a mere two hours before a heated football game. Tempers will flare. People will act out. Issues will occur. It’s the “cost of doing business,” so to speak. Afterward, Harbaugh called the incident “bush league” and MSU coach Mark Dantonio responded by saying the entire thing was “B.S.” and “juvenile.”

But don’t tell that to Harbaugh, who was still fired up on Monday about what he perceived to be a slap in the face to everything good and great about his team’s honor.

“That had all the earmarkings and evidence of an orchestrated stormtrooper march,” he told reporters.

Of course, even though Harbaugh seems to think the worst of Michigan State over the incident, he praises the way his team handled the situation, even if they were just as big babies.

“I don’t blame Devin,” Harbaugh said. “I liked the way our guys handled it. That’d be like going back and saying, ‘Look at Devin Bush, look at him out there. He’s out at midfield scraping the logo after what just took place.’ That’s straight out of the Pistons’ playbook. Do something to them, say something to them, elbow them, and then when somebody else does something back, then flop.”

Harbaugh went on to say this wasn’t just a case of “rivalry gonna rivalry,” but instead a sign that Michigan State is rotten to the core, sir!

“Both teams share the field. Each has a sideline, each has half the field to warm up on. Then Michigan State locked arms and used every inch of the field in their walk to attempt to go through and over our guys in a physical manner. To call that unsportsmanlike or to call that bush league is putting it mildly. That could have been a real unfortunate incident. It’s the opposite of B.S. Coach [Dantonio] said that was B.S, but that’s not B.S. That’s fact. I’ll go one step further and use coach Dantonio’s words from a few years back: it’s not a product of the team, but their program.”

In a way, all of this Sturm und Drang is perfect for Harbaugh, who loves making headlines for things that happen off the field. Some might say it’s a way to deflect attention from what’s going on with his team on the field, though in this case, he should be happy with the state of his own program. Of course, if Michigan falters against Penn State this weekend or against rival Ohio State at the end of November, we’re sure Jim will find something else to make a big fuss out of in order to distract us from that, too.