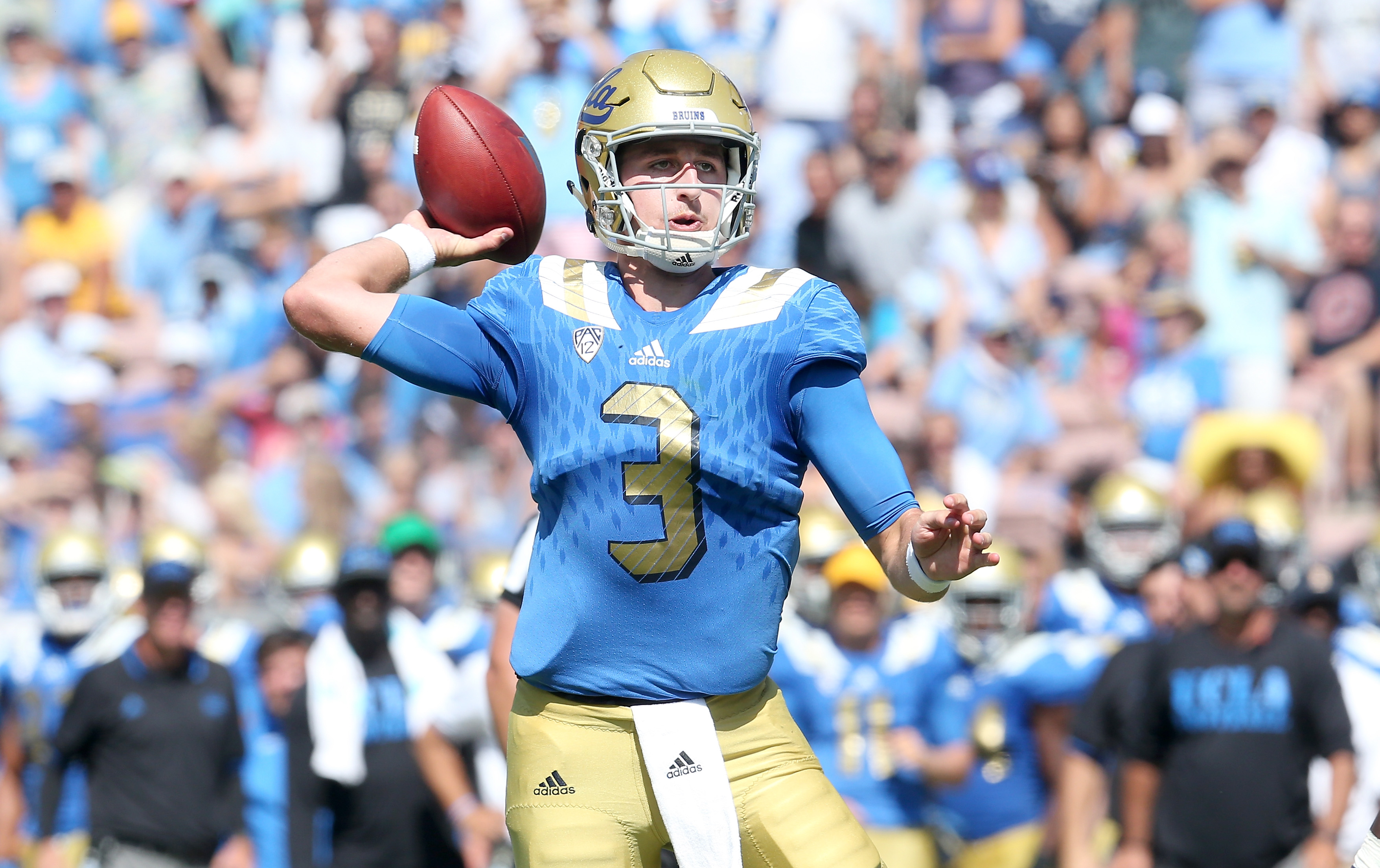 After a very promising freshman campaign from quarterback Josh Rosen, the UCLA Bruins were riding high expectations into the 2016 season. They were ranked in the preseason top-20, Rosen was getting 16-to-1 odds to win the Heisman Trophy and it appeared that the Bruins were the favorite to win the Pac-12 South.

A year later, expectations are far more muted for UCLA after a 4-8 season which featured a season-ending shoulder injury for Rosen in October. The Bruins are not included in very early top 25 rankings, and the hated USC Trojans are the favorite in the division. USC quarterback Sam Darnold, hot off a thrilling Rose Bowl victory, is the odds-on favorite to win the Heisman and is getting all the buzz as a future No. 1 pick (instead of Rosen).

Life comes at you fast.

Despite the Trojans’ resurgence, there will still be a lot of eyeballs on UCLA this season. There’s pressure on Rosen to make a comeback from injury, and also for Jim Mora to capitalize on the talented roster he’s built since arriving as head coach in 2012. Since winning the Pac-12 South in his first season, the team has fallen in the standings every year since — though they were ranked to end both 2013 and 2014. (They were not in 2012.) Mora is now firmly on the hot seat, and there’s a real chance he’s let go if the Bruins fail to win at least seven games or so.

But can Mora dig this team out of the hole, even marginally? His history as a head coach suggests it’s not exactly his forte.

Mora took over the Atlanta Falcons in 2004, and subsequently ended up in the NFC Championship Game on the shoulders of Michael Vick. With Vick healthy in both 2005 and 2006, the team still declined to a 7-9 record before he was fired.

In one year as the head coach of the Seattle Seahawks, the team went 5-11, failing to improve upon the disastrous 4-12 finish the season before.

And since he arrived at UCLA, the Bruins have gone from division champs and a top-15ish team, to an 8-5 unranked squad, to a 4-8 season that featured just two Pac-12 wins.

His team’s quarterbacks haven’t necessarily shown improvement, either. Vick stayed pretty static from 2004-06, while the roster around him largely imploded. Neither Matt Hasselbeck nor Seneca Wallace was an efficient passer in 2009. Brett Hundley’s play-making ability certainly declined in his three years starting at UCLA. And Rosen’s numbers before he was injured in 2016 were a far cry from the stats he amassed during his breakout 2015 season.

Mora quarterbacks are constantly under siege (caveat there for Vick, obviously, due to his playing style), and rarely protected adequately. Just one year, 2015 at UCLA, has really featured an elite offensive line that helped prevent unnecessary hits on passers. Otherwise, his QBs have taken a beating, leading to minor injuries for Vick and Hundley, and major ones for Hasselbeck and Rosen. Just two seasons (2015 and 2016) have seen his passers take fewer than 36 sacks in a year.

The coach also tinkers constantly — as most coaches do — but with questionable goals in mind.

Last offseason, he moved UCLA to a pro-style offense, despite Rosen’s success in the old system. The Bruins fell from 28th to 91st in total offense. He debuted a bit of a spread offense in 2012, only to move to a read option over time. This past January, he shared some negative feelings on the spread too (despite the impetus for the comments being false). The team will debut yet another offense this year, with Jedd Fisch’s pro-style attack that puts more emphasis on the run game.

There were instances of these constant changes in Atlanta, as well. Vick ran a ton in 2004, then was scaled back in 2005 while the team emphasized the passing game more (Vick’s arm was never amazingly accurate). By directive or not, the team put the offense entirely on Vick’s shoulders in 2006, when he had over 2,400 passing yards and over 1,000 rushing yards in a single season.

So now we wait to see if this latest switch will work.

UCLA has had a top-20 recruiting class each year since 2013. The talent has been on the roster for this group to break through, even in the difficult Pac-12. But they’ve been held back, in part by some unfortunate injury luck at the quarterback position and elsewhere, but also by the diminishing returns from the coaching staff.

Mora can win at any level. He’s proven that. But he’s yet to show he can improve a team over time. That’s essential for any coach, especially in the college ranks. Despite the USC hype in L.A. right now, the pressure will still be on Mora to deliver success once again for the Bruins, too.