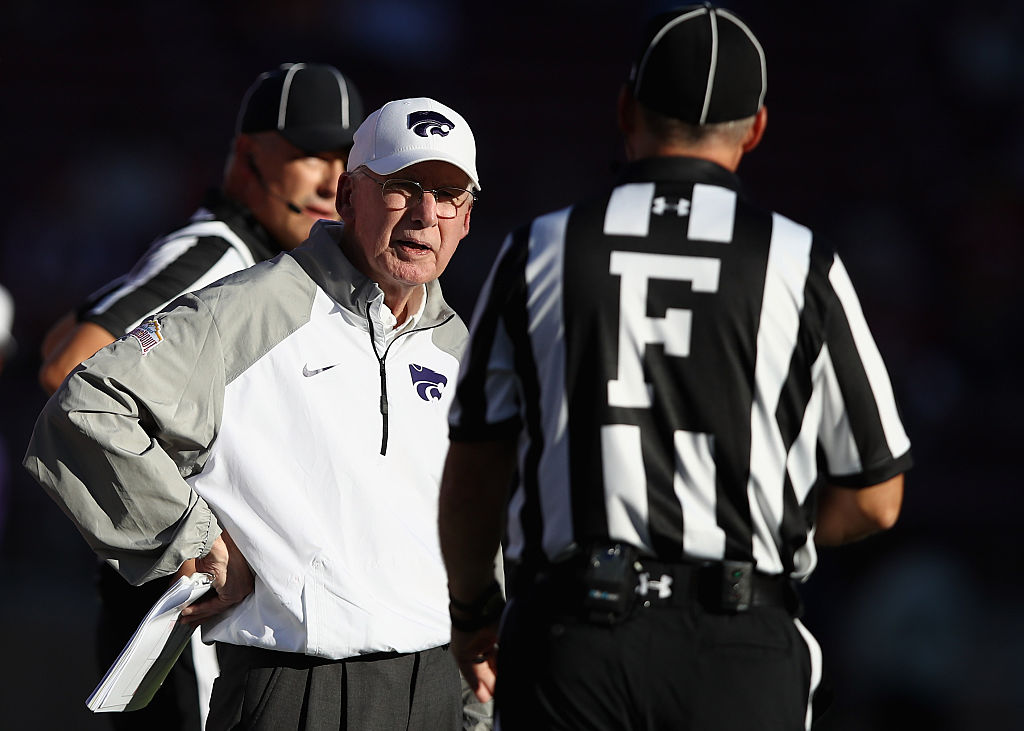 Bill Snyder is in the midst of his second stint as the head football coach at Kansas State. The first ran from 1989 to 2005, while the current run started in 2009. Since his first year as head coach in Manhattan in 1989, a lot has changed in college football.

From 1989 to 2016, recruiting has changed dramatically thanks to social media, ESPN and FOX emerged to bid billions for TV rights, and college coaches are becoming the highest paid public employees in their states.

In short, college football is a lot more profitable in 2016 than it was in 1989, and Bill Snyder isn’t necessarily a fan of that.

During the final Big 12 coaches teleconference of the season, the 77-year old Snyder was asked about big contracts and the current coaching carousel, mainly the now-filled jobs at Texas and LSU.

The veteran head coach then immediately went after the sport he’s coached for so long by saying college athletics, and specifically football, has sold out to TV and money.

He isn’t necessarily wrong either. Here are his comments in full.

“I make far more than I’m worth, I can assure you of that,” he said. “But coaching salaries are ballooning toward $10 million a year.”

“Well, and I’ve expressed my feelings about this on numerous occasions. I can’t tell you I have the answers, but we all have opinions. It’s my feeling that we have exploited college football — college athletics in general and college football, in particular.

“You know, we speak all the time about the welfare of the student-athlete and indeed that is not what has evolved as the most important thing. It’s been strictly about winning and dollars. Maybe dollars first and then winning second, or vice versa. But you know, I think we’ve sold out to the dollars and cents.

“We’ve sold out to TV, and if I were in the TV market or in that field I’m sure we’d want to promote all that we could for our TV business, but you think about games being played for money, that’s the intent of it, you play for money, so we’re playing games on — you pick the night of the week.

“Virtually, I think there are one or two nights we don’t play college football and when you think about a team picking up and traveling, if we have to go halfway across the country and play Thursday night, for instance, you miss Wednesday classes, you miss Thursday classes you probably miss — if they schedule you as a night game, which is what’s going to happen on Thursdays, then you’re going to miss all or a vast majority of Friday classes, and we don’t think anything about that because it brings in money.

“Then we’ve spent countless millions and millions and millions of dollars on so many things. I mean, we all have nice facilities, and we’re all grateful for the people who invest the money to do that, but to me, it kind of sends a little different message, as well. It’s a message that says the dollars and cents are more important than anything else, more important than the value system that you’re trying to impart on young people in your program. There are a lot of things that enter into it, but it’s changed dramatically over the years.”

We could paraphrase Snyder’s comments, but it wouldn’t do Snyder justice.

With their 34-19 win over Kansas on Saturday, Kansas State gave Snyder the 200th win of his career. Despite all he’s accomplished over his career, Snyder is the sixth highest paid coach in the Big 12 at $3.1 million a year.

That salary is just a third of what Michigan head coach Jim Harbaugh makes as the highest paid coach in college football. Harbaugh’s yearly salary is an incredible $9 million. Meanwhile, the highest-paid coach in the Big 12 is Oklahoma’s Bob Stoops at $5.55 million.